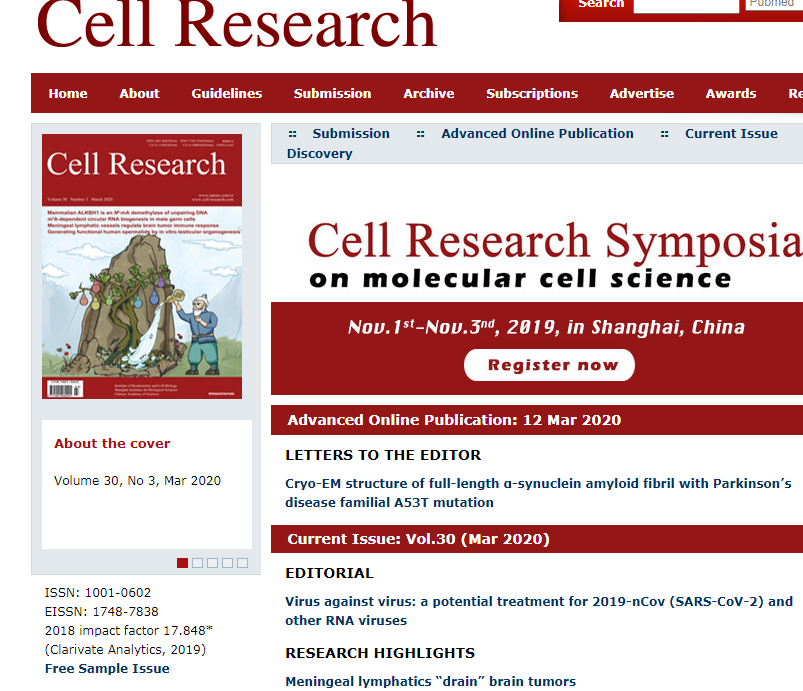 Cell Research, a Chinese academic journal in the life sciences area, has moved up in international rankings based on the number of times its published papers were cited. [Photo/Screenshot of official website ofCell Researchjournal]

Cell Research, a Chinese academic journal in the life sciences area, has moved up in international rankings based on the number of times its published papers were cited.

Its "impact factor", as it's called, allowed the journal to move up to seventh among 195 journals in the cell biology field, and it continues to be ranked first among those based in the Asia-Pacific region, according to the 2019 Journal Citation Reports by Clarivate Analytics, a global analytics firm.

The rise of the journal will contribute to enhancing the influence of China's academic journals and promoting original innovation in life sciences in the country, according to senior executives from the Center for Excellence in Molecular Cell Science Affiliated with the Chinese Academy of Sciences, which jointly publishes the journal with the Chinese Society for Cell Biology.

"The rapid development of Cell Research is the epitome of how China's basic research in life sciences has thrived and how the country's macro environment of science and technology is progressing," said Pei Gang, an academician with CAS and editor-in-chief of the journal.

"However, impact factor will never become our goal. The sole pursuit of scientific research is to discover truth in science," he said.

Cheng Lei, managing editor of Cell Research, said that the journal is meant to provide a platform for scientific development and will never cut corners for bigwigs in the sphere.

"Instead, we've become friends with some influential researchers even though they have had their papers rejected by us," said Cheng, adding that the ratio of Chinese and foreign scientists who submitted their papers to the journal was about half and half.

Li Dangsheng, deputy editor-in-chief of Cell Research and a professor at the Center for Excellence in Molecular Cell Science, said that their long-term goal is to empower the journal to reach a world-class level and join the elite company of Boston-based Cell, Washington based-Science, and London-based Nature.