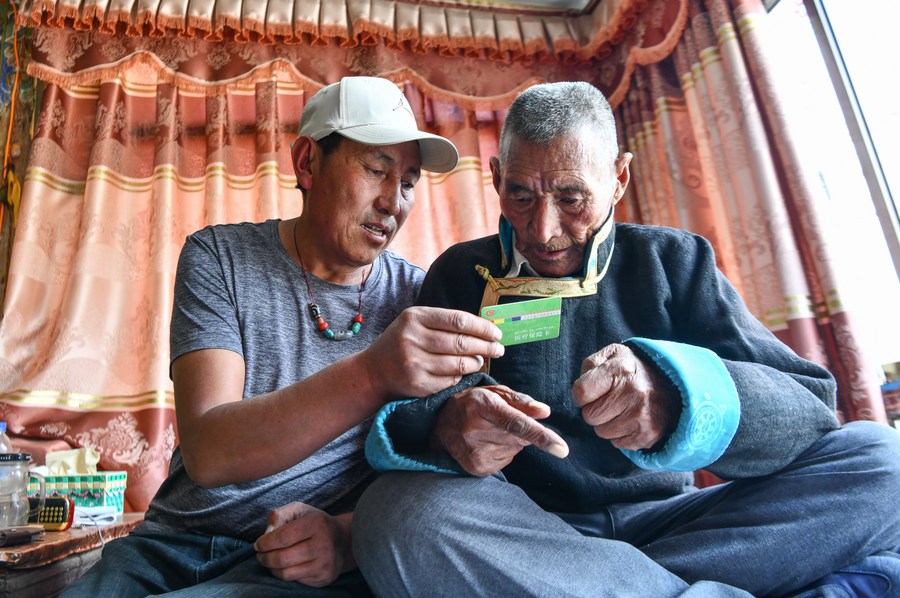 Lhapu (R) listens as his son explanes the usage of the medical insurance card at Lin'a village of Dagze county in Lhasa, Southwest China's Tibet autonomous region, April 25, 2021.Lhapu, born in 1938, worked as a serf before the democratic reform in Tibet in 1959, which abolished its feudal serfdom under theocracy. [Photo/Xinhua]

The cause of human rights in the Tibet autonomous region has made all-around progress and historic achievements, experts on Tibet-related issues said at an international symposium on Wednesday.

Experts and scholars from China, Russia, Bangladesh, Pakistan, Nepal and other countries attended the symposium in Chongqing in person or online.

The experts agreed that the economic and social development achievements of Tibet in the 70 years since the region's peaceful liberation have been remarkable.

Tang Li, vice-president of Southwest University of Political Science and Law, said Tibetan people of all ethnic groups have established a socialist system, implemented a system of regional ethnic autonomy and promoted reform and opening-up as well as socialist modernization, marking a great historical change.

He said people of all ethnic groups are able to enjoy rights they could never have imagined in the past. Tibet has shaken off poverty and maintained greater social stability with a prosperous economy, thriving culture and a better environment.

Du Yongbin, a researcher at the China Tibetology Research Center, said that in 70 years, Tibet has moved from tradition to modernity, from closure to openness and from control to governance.

In the old Tibet, where feudal serfdom dominated society and the ruling system was based on the unity of religion and the state, the aristocrats were in charge and the words of Living Buddhas and lamas were the law. After liberation, Tibet established the rule of law, which allowed its governance to be modernized and improvement in people's living standards, he said.

The most prominent material differences have been the change in people's identity and urbanization, and Tibetan people have gradually cemented the concepts of citizenship and the rule of law, Du said.

Yogeshwar Rokhimi, former senior superintendent of the Nepal Police and leader of Nepal's People's Party, said the peaceful liberation accompanied by democratic reforms was the greatest and most profound social change in Tibet's history.

Tibet's social security and welfare system have developed tremendously and now cover all its residents. The central government and the regional government have also given strong support to the preservation of Tibet's traditional culture and fully guaranteed the rights of all Tibetan ethnic groups to participate in its administration, he said.

"The happiness index of the Tibetan people has risen significantly," he added.