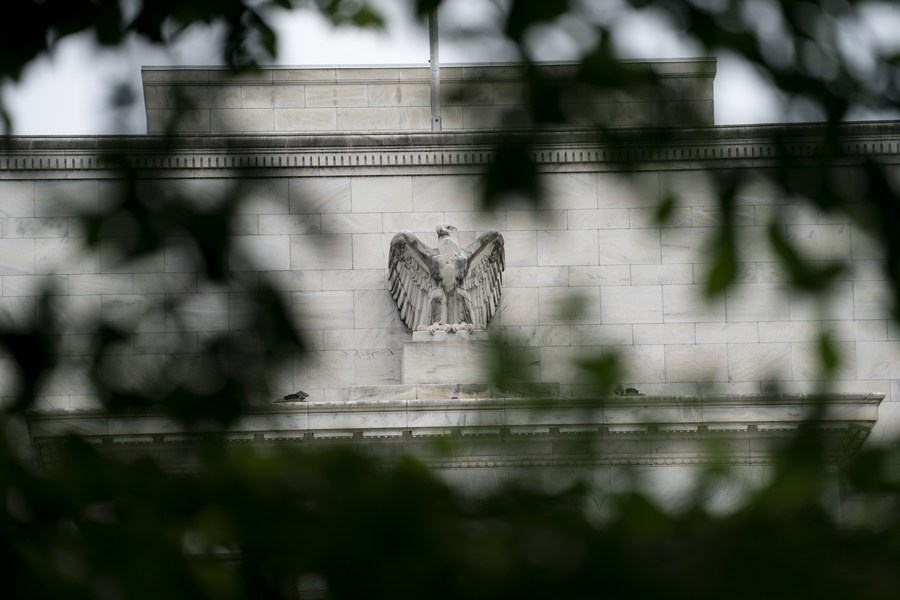 Photo taken on June 22, 2022 shows the US Federal Reserve building in Washington, DC, the United States. Photo by Xinhua

The US economy falling into recession within the next 12 months is a virtual certainty, according to the New York Post, citing Bloomberg Economics forecast model released on Monday. Many top executives from Wall Street's biggest banks share similar views, saying they're preparing for a potential recession.

Bloomberg Economics' latest statistical projections showed a 100 percent probability of a recession within the next 12 months, compared to a 65 percent likelihood of a recession in the Bloomberg model's most recent previous update.

The forecast gave reasons for the recession including the US economy contends with decades-high inflation, US Federal Reserve interest-rate hikes, and mounting geopolitical tensions.

Nearly all CEOs are readying for the US economy to fall into a recession, according to FOX Business, citing a survey released on Oct 13 by The Conference Board.

The survey found that 98 percent of CEOs indicated they were preparing for a US recession over the next year or year and a half. That figure is five percent higher than in the third-quarter survey.

About 81 percent of CEOs said economic conditions had gotten worse compared to six months ago, according to The Conference Board. Nearly three-quarters were pessimistic about their expectations for the coming six months, with 74 percent saying they thought conditions would get worse.

"We recognize the pressure points are building in several areas of the economy that could lead to stress in the future," said Andy Cecere, CEO of US Bank, in an Associated Press report on Oct 14. Wells Fargo CEO Charlie Scharf told investors on a conference call that the bank expects broader economic conditions to weaken.

JPMorgan Chase CEO Jamie Dimon said to the Associated Press that there's a "very, very serious" mix of concerns could lead to a recession in the next six to nine months.

There's an 80-percent chance of the US falling into a recession — much higher than previously predicted, according to Steve Hanke, a professor of applied economics at Johns Hopkins University. Hanke said that to CNBC's "Street Signs Asia" on Sept 23.

Hanke was critical of the US Federal Reserve's failure to manage inflation. "They have really been searching for inflation and the causes of inflation in all the wrong places. They're looking at everything under the sun, but the money supply," Hanke said.