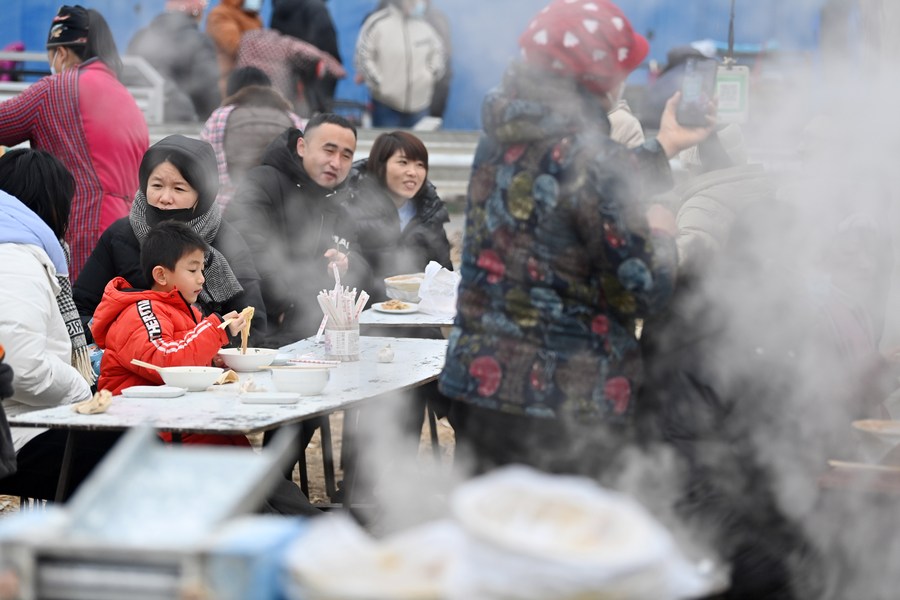 Steamed buns, fresh oysters and scallops. Li Chuyun filled the trunk of his car with loads of delicacies after a busy day of shopping at a country fair in east China's Shandong Province.

Located on the outskirt of the coastal city of Rushan, the Haiyangsuo Fair boasts a history of hundreds of years. About every five days, a dazzling array of seafood, agricultural products, clothes, and daily necessities line up along both sides of the road for over 2 km, attracting thousands of people from local villages and beyond.

Li was one of many young urbanites who made special trips to the gathering. As the Spring Festival approaches, the fair is getting even more bustling with excited holiday shoppers.

Such a festive mood is now hard to find in cities. "When I was a kid, I often went to the fair with my parents, but rarely did so after I grew up," said the 21-year-old college student.

Recently, however, a "country fair boom" has emerged among China's Generation Z. On popular platforms such as Douyin and Xiaohongshu, photos and vlogs of country fairs flourish. Some shared an open-air dining experience, while many others focused on the commodities of authentic local colors.

Many traditional foods and ordinary vendors suddenly won unexpected fame after being featured by social media influencers. Swiping on their phones while drooling with envy, netizens swarmed into the comment sections, asking for addresses and prices or simply expressing how much they wanted to be there.

Yang Chenlu, a 19-year-old who grew up in Dongying, Shandong, felt homesick for the first time after she attended college in northern China last year.

After returning home for winter vacation, Yang went to a local fair and instantly fell in love with it. "The familiar aroma of snacks, street cries, and small talk among neighbors constitute the happiness of hometown!" She wrote on her social media page.

Young people tend to fancy new things. But in recent years, a zeal for traditional cultural treasures, such as Han Chinese clothing, has become the new chic, further amplified by social media.

Similarly, in the case of country fairs, the combined charm of home, memories, and delicious food easily resonates among the young.

Local governments across China have also contributed to the rising popularity of country fairs, introducing a slew of policies to restore consumption and develop fair tourism.

For example, the provincial government of Shandong has launched the "Yellow River Fair" and aims to build it into a famous cultural brand.

The fair will be held once every season in multiple cities, with the inaugural one already kicked off. Coupons have been distributed to attract consumers, and livestreaming e-commerce has further promoted the event.

Sun said that the "country fair boom" highlights the new vitality of the Chinese economy and society and reflects the younger generation's growing interest in their own culture.

"The young Chinese are taking the lead in passing on traditional culture and sharing the stories of China with more people in the world," he added.