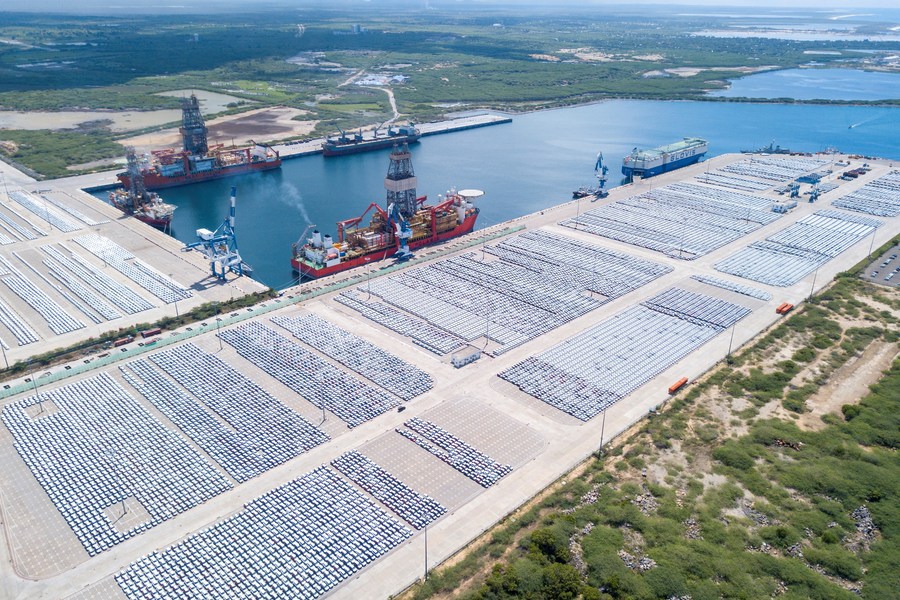 How ironic to see that the United States, though touting the Chinese debt trap fallacy in a high voice, holds its tongue on the topic of doing more to help poorer countries address debt burden.

Michael Ondaatje, one of Sri Lanka's greatest chroniclers, once said, "In Sri Lanka, a well-told lie is worth a thousand facts."

That seems true in the case of the "Chinese debt trap" myth, for which rumormongers frequently single out China's financing in Sri Lanka's Hambantota Port.

By making a fuss over the Chinese investment and the recipient's debt troubles, and turning a blind eye to the fact that most of the nation's debt comes from the West, the propagators attempted to peddle a "post hoc ergo propter hoc" fallacy and misrepresent the cause of Sri Lanka's economic woes.

The international community doesn't buy into the West's and particularly Washington's accusations of the Chinese debt. Instead, "many countries prefer the engagement with China ... because China is giving them a better option" with respect to their social models and governance, Shakeel Ahmad Ramay, chief executive officer of the Asian Institute of Eco-civilization Research and Development in Pakistan, told Xinhua.

Meanwhile, the Global South is well aware of the ulterior motives of U.S. lies about so-called debt traps, carefully orchestrated to undermine cooperation among developing countries, and to maintain the U.S. hegemony by plundering and manipulating other economies.

A widely-circulated factoid goes that Chinese banks offered Sri Lanka predatory loans to build Hambantota Port despite unprofitability of the project, and eventually pushed Sri Lanka into default so that the country had to surrender control to a Chinese firm in exchange for debt relief.

All these allegations don't hold water.

A recent report by New York-headquartered Liberation News press agency disclosed that an Indian pundit put forth the term in an article in 2017 without actually doing any research. Soon afterwards, some Western media and politicians worked perversely to hype the debt-trap fallacy with concocted stories.

In one egregious instance, BBC News edited an interview with Deborah Brautigam, a U.S. scholar who has challenged the falsehood, by deliberately omitting all evidence she cited against it to mislead listeners.

In fact, Brautigam, an international political economy professor at Johns Hopkins University, has concluded the debt-trap narrative is just "a lie, and a powerful one" after a lengthy research done in collaboration with Meg Rithmire, an associate professor at Harvard Business School. In an article published in the Atlantic in 2021, the academics argued that Chinese creditors are willing to restructure the terms of existing loans and have never actually seized an asset from any country.

As for the financial plight facing Sri Lanka, data from its Department of External Resources shows that as of 2021, a staggering 81 percent of the country's foreign debt was owned by U.S. and European financial institutions as well as Western allies Japan and India, in sharp contrast with the mere 10 percent owed to Beijing.

"Sri Lanka has 47 percent of its debt in international sovereign bonds, which are the most painful," Kasun Kariyawasam, a Sri Lankan economist, told Xinhua, referring to the plurality of his country's foreign debt owned by Western vulture funds and banks. Empirical evidence proves the claim against China is untrue and based on distorted narratives, he said.

Then why did this island country become so prominent in Western politicians' speeches since 2017?

With the Belt and Road cooperation in full swing, "China currently offers an alternative to traditional financing schemes, which has led to more prosperous and realistic development aid." Western countries see this as a threat and create a discourse to deter developing countries from engaging with China, Argentine economist Pablo Levinton told Xinhua.

When Sri Lanka went to China in search of funds, China was respectful and never forced Sri Lanka to take money, he said, adding China also provided Sri Lanka with some financial facilities and credit line, as well as some humanitarian assistance. 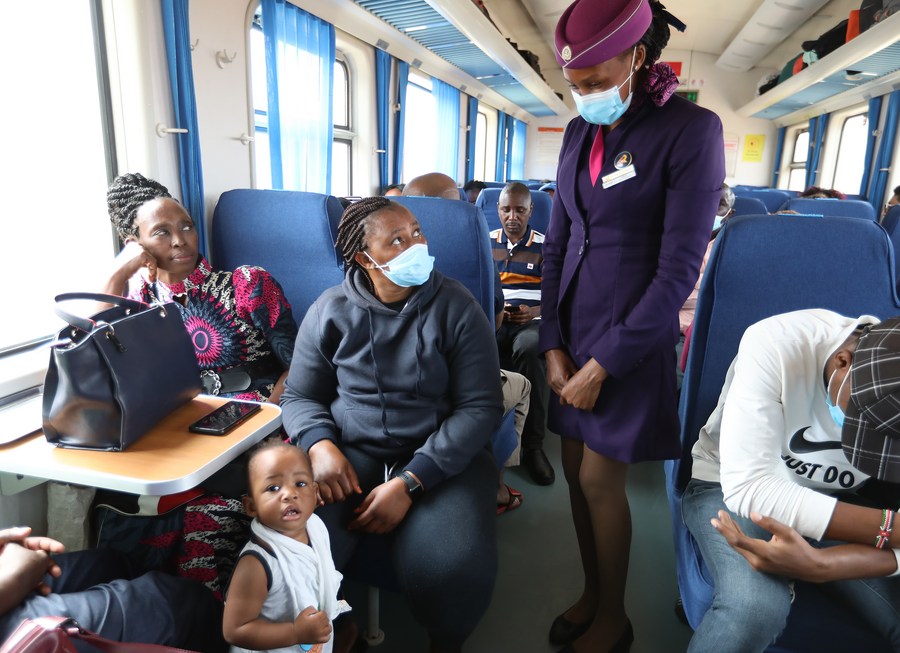 The enthusiasm across the Global South in participating in China-proposed development initiatives has rendered the Western anti-China propagation null.

There are many reasons why Chinese investment has been welcomed. Fundamentally, Chinese development financing is recipient-driven, as "infrastructure projects are determined by the recipient country, not China, based on their own economic and political interests," the above-mentioned Liberation News report observed.

Furthermore, China often advances loans at fairly low interest rates, and is willing to restructure the terms of existing loans to be more favorable to the borrowing country, or even forgive loans. As seen in the debt of African countries, the amount owed to Western private lenders is three times what they owe to China, and interest rates on private loans are twice those on Chinese loans, according to a study published in July by British charity Debt Justice.

Many low- and middle-income countries prefer Chinese investment to that from the West, not only because China appears more like a benevolent creditor, but rich countries typically brand developing countries as high risks plus low rewards, and impose onerous conditions that delay project implementation and increase costs.

"Western lending tends to extend its conditions beyond loans ... and tends to invest in financial services and other industries related to the service sector," Sri Lankan economist Kasun Kariyawasam told Xinhua. In comparison, "Chinese loans are more flexible and do not include any non-loan conditions," and the funds commonly flow into "real assets that increase the value of the real economy."

Guided by the principles of sincerity, real results, affinity and good faith, and with a commitment to the greater good and shared interests, China endeavors to strengthen solidarity and cooperation with other developing countries and safeguard the common interests of the developing world, as stated in the report to the 20th National Congress of the Communist Party of China.

From the China-Laos Railway that transformed landlocked Laos into a land-linked hub to Kenya's Mombasa-Nairobi Railway contributing more than 0.5 percent to the African nation's economic growth, China has always upheld the principles of extensive consultation, joint contribution and shared benefits when partnering with other countries and abstains from internal interference.

Kenya is no stranger to the geopolitical games and anti-China narratives alike. Former Kenyan President Uhuru Kenyatta sighed that there are always some people who like to point fingers despite the fact that China has sincerely helped Kenya solve problems and meet its needs with actions.

Having witnessed the completion of the Chinese-built Kipevu Oil Terminal project in the coastal Kenyan city of Mombasa last year, Kenyatta said he was often asked why Kenya and China cooperate so closely, and he responded that is because China and Kenya respect each other and treat each other as equals.

Poll results effectively reflect the Chinese investors' image in the recipients' eyes. A survey released in June by Johannesburg-based think tank The Ichikowitz Family Foundation found that a majority of African youths see China as the most influential and positive foreign player on the continent. The principal reasons they cited for China's positive influence include affordable Chinese products, Beijing's investments in local infrastructure and China's creation of jobs.

In his bestseller "Confessions of an Economic Hit Man," John Perkins suggested that debt trap is nothing new, but in light of its history, the real culprit of virtually every crisis was the United States.

The U.S. dollar as the globe's most dominant currency, Washington's hegemonic status in the international financial system and the spillover effect of U.S. policies, among other elements, have all contributed to the surge in national debt of developing countries.

In a report issued in August, researchers led by Professor Tang Xiaoyang of China's Tsinghua University found that with encouragement from Western financial institutions, the stock of sovereign bonds of all low- and middle-income countries rose by nearly 400 percent to reach 1,737.2 billion dollars from 2008 to 2020. Now interest payments to these Western institutions account for more than 63 percent of the total interest expenses of the bond-issuing countries.

Since the Federal Reserve's seven straight "jumbo" rate hikes in 2022 -- lifting the rates to 4.25-4.5 percent, a 15-year high -- could have dramatically impacted the debt construction or financial stability of these countries, a quite stronger dollar will substantially increase the debtors' repayment burden and eroded their solvency margin.

Under such circumstances, many borrowing countries have to issue new bonds with higher interest rates to repay old debt, sliding into a medium- and long-term vicious circle.

As the U.S. establishment hunted for prey and squeezed poor countries dry, vulture funds, pawns of U.S. interest groups and the Wall Street, have also set debt traps in developing countries to fill up their own pockets. The distressed debt investors typically buy sovereign debt of countries near or in default at deep discounts, then fiercely litigate to claim full payments and employ all possible tactics to bring debtors to heel.

Take Argentina's 15-year scuffle with Wall Street vultures. In 2001, Argentina defaulted on 100 billion dollars of sovereign bonds and offered debt revamps twice in 2005 and 2010, accepted by about 92 percent of the creditors, while a handful of vulture funds shunned the settlement process and hauled Argentina to U.S. courts, which had jurisdiction over the bonds.

Unfortunately, the U.S. federal court in 2014 barred Argentina from repaying other bondholders until it paid the holdout creditors, and forced the country into an agreement in 2016 to pay 4.65 billion dollars, a sum equivalent to nearly 1 percent of Argentina's GDP that year.

To settle a deal alone with NML Capital, a subsidiary of Elliott Management headed by Paul Singer, a mega-donor for the Republican Party, Argentina paid more than 800 million dollars for the bonds the hedge fund spent merely 48 million dollars on -- a return of more than 1,600 percent.

Speaking before the UN General Assembly in 2014, then Argentine President Cristina Fernandez accused vulture funds of practicing "economic and financial terrorism." It's even more horrible that the rogue debt collectors who Fernandez said caused "hunger, misery and poverty" were supported by the U.S. political establishment.

Argentina is by no means the only victim that has fallen prey to traps set by vulture funds.

Pierre Jacquemot, who served as the French ambassador to Kenya and Ghana, said at least 32 African countries encountered legal battles with vulture funds over distressed debt issues. His notion was reinforced in a study by Harry Verhoeven at Columbia University and Nicolas Lippolis at the University of Oxford, which found the rise in African debt due to Chinese lending pales in comparison with the debt burden created by private creditors of other countries in the last decade.

"Western lenders for long have not been put on the spotlight for debt relief because they successfully managed to dupe the world that it's only Chinese lenders that pose a threat to Africa," Uganda-based Vision Group journalist Mubarak Mugabo said.

As a matter of fact, China has extended debt suspension to other developing countries during the pandemic, but private lenders in the West did not, said Tim Jones, head of policy at Debt Justice.

How ironic to see that the United States, though touting the Chinese debt trap fallacy in a high voice, holds its tongue on the topic of doing more to help poorer countries address debt burden.

"Western leaders blame China for debt crises in Africa, but this is a distraction ... The UK and the U.S. should introduce legislation to compel private lenders to take part in debt relief," Jones said.

Should those Western countries truly care about the developing world, demonstrate their sincerity to give unflagging support long craved by the indebted countries or simply more concession on debt relief, instead of playing the old trick of "Chinese debt trap." Or at least, just stay out of the way of those genuinely lending a helping hand.

Clearly, they have neither such noble intention nor honorable deeds in this respect.