Why Changsha leads the country in GDP growth

Changsha, the capital of Central China's Hunan province, has taken the lead among 33 major cities nationwide in terms of GDP growth rate over the past 10 years.

From 2005 to 2015, Changsha's GDP grew by 460 percent, increasing from 152 billion yuan to 851 billion yuan ($127.8 billion). The incredible rate of growth has outperformed all other major cities across the county, according to a recent report by China Business News.

The Shanghai-based daily reached the conclusion by analyzing the economic data released by local statistics bureaus over the past 10 years.

According to follow-up analysis by Changsha Evening News, the rapid economic growth owes itself to the city government's support in industrial reform, innovation and entrepreneurship. 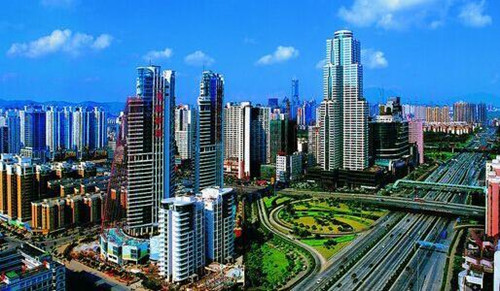 Changsha used to be a city with a weak industrial base, but it now boasts four large-scale industrial clusters in the fields of materials, food, engineering machinery and electronic information.

The government has allocated special funds to award enterprises and support the planning and improvement of the 14 industrial parks scattered across the city. Meanwhile, the administrative and approval procedures for the industrial parks have been simplified to raise efficiency.

As former pillar industries adjust themselves to the new era, new industries, such as 3-D painting, robot manufacturing, and biological medicine have sprung up. In 2015, the total output of the new materials sector reached 262.1 billion yuan, replacing engineering machinery as the city's largest industrial sector.

Major projects have bolstered the industrial structure upgrading in the city as well. The Changsha government set quotas for each national-level industrial park so that they attain at least one major project with an investment of no less than five billion yuan per year.

Leading enterprises, such as China Railway Signal and Communication Corp, IKEA and Macrolink Group have set up bases in the city from which they have launched major projects. As the number of projects grew and grew, so did the driving force behind transforming the industrial structure. 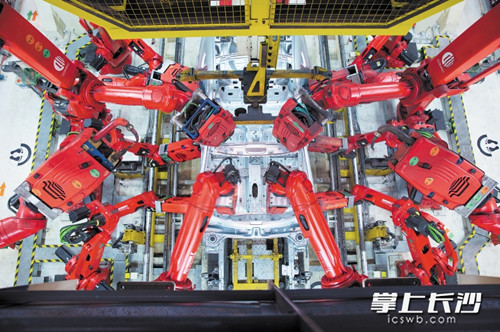 Robots assemble vehicles at a manufacturing plant in the Changsha Economic and Development Zone. [Photo by Wang Zhiwei/Changsha Evening News]

As one of the country's hubs for science and education, Changsha has 129 scientific R&D organizations, 57 colleges and universities and 17 national-level engineering and technological research centers. These organizations cultivate and produce innovative talents every year.

Meanwhile, the Changsha government has carried out supportive policies to stimulate innovation and entrepreneurship in new industries and startups.

Since the Internet plays an important role in contemporary economic development, Changsha has strived to boost the mobile internet industry. Crowned as a benchmark city for Internet Plus in June this year, it has built several technology parks designed for mobile internet enterprises, such as Xincheng Science and Technology Park, Changsha CEC Software Park and Hunan Lugu Infoport.

A man tests a virtual reality system at an intelligent technology company in Changsha. [Photo by Wang Zhiwei/Changsha Evening News]

A summit forum of the top 500 enterprises in China will open in Changsha on Aug 27, to discuss the innovation and transformation of industries in the new era. The city will use the opportunity to show its openness and vigor in promoting leading enterprises and investment.

Economic growth is always considered a priority for the city, and so it will continue to accelerate its efforts to achieve coordinated development among industries, the city and the people.

While housing prices soar in many major cities in China, the real estate market in Changsha remains steady regardless of the rapid economic growth. As a result, the city is a top choice for people wanting to start up a business and buy a home.