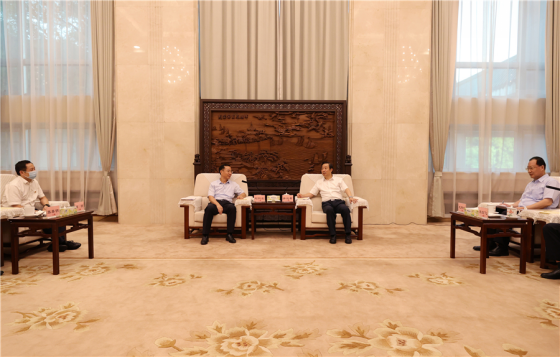 Secretary Xu said that last September, President Xi Jinping inspected Hunan Province and set the goal of Hunan's building the “Three Highlands” and fulfilling the “Four New Missions”. Over the past year, we have kept in mind his entrustment to implement the Three Highlands and Four New Missions Strategy; promote solid progress in high-quality development; and, consolidate and expand the sound development momentum. Forging ahead on a new journey, we welcome companies including China Unicom to Hunan to share development opportunities and create a better and brighter future. We expect China Unicom to keep deepening cooperation with Hunan government, and focusing on the development of the digital economy. It may continue to make efforts in the deep integration of informatization and manufacturing, the upgrading of the communication industrial chain, the new digital infrastructure, big data services, and digital benefits for the people. In particular, it could promote 5G application in such fields as industrial Internet, education, medical and health care, and social governance. Hunan government would offer an excellent environment and high-quality services as always, so that the pragmatic cooperation between the two parties will achieve more fruitful results, he added.

Chairman Liu remarked that Hunan is a popular province for entrepreneurs. China Unicom and Hunan have maintained sound partnership, especially in the areas of 5G convergence applications, and achieved many distinctive and promising results. In the future, China Unicom will closely follow the Three Highlands and Four New Missions Strategy implementation; increase investment in new digital infrastructure construction; continue to promote the deepening of 5G integrated applications to a higher level and in multiple fields; and, contribute more to accelerating the high-quality development of Hunan Province.