The chili peppers may be uniformly scorching, but how its heat is expressed differs in China, ranging from Hunan's pure flame to Sichuan's oily and numbing mala to Yunnan and Guangxi's tart taste

Editor's Note:China is divided into as many culinary regions as there are different ethnic groups. Its geographical diversity and kaleidoscopic cultural profiles contribute to an unending banquet of flavors.

The original spice girls are from Western China's Hunan province, where the lasses are famous for loving their red hot chilies. They are immortalized in a catchy ditty that has become the signature song of folk diva Song Zuying, who is also from Hunan.

Song first sang La Meizi or Spice Girls during the Spring Festival extravaganza on Chinese national television 15 years ago and later reprised it often in concerts, including her performances in Vienna, at the Kennedy Arts Center in New York and at the Sydney Opera House. 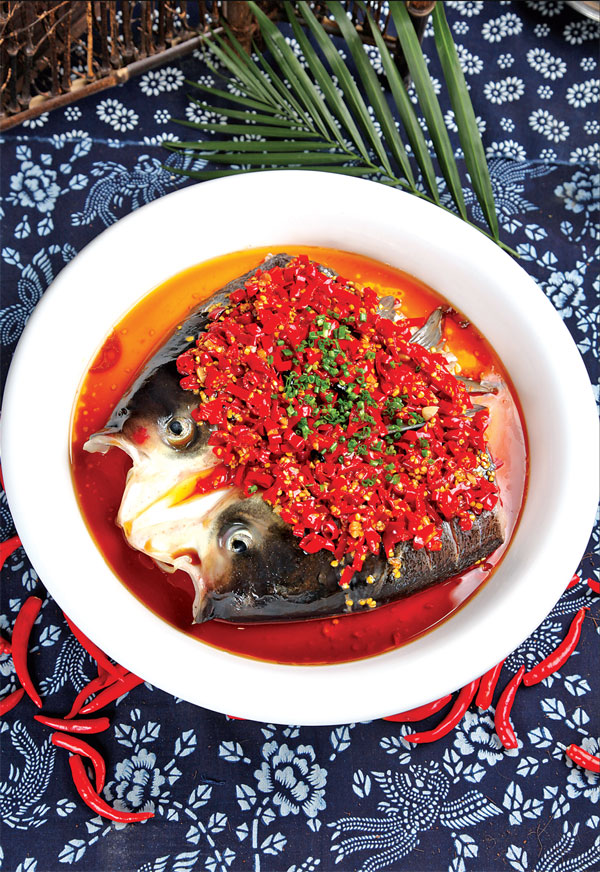 Chili peppers were introduced into China only during the late 15th century or early 16th century via the Silk Road. Provided to China Daily

Hunan girls - the la meizi, or spice girls, lauded in the song - are known as much for their fiery personalities as their love for the hot, red chili peppers. While Sichuan spiciness is mixed with the tongue-numbing influence of prickly ash berries, Hunan cuisine is pure, unadulterated heat, fueled solely by red peppers.

Spiciness is the final crescendo in the five tastes of the Chinese kitchen - and it was originally "foreign". That is to say, chili peppers were introduced into China only during the late 15th century or early 16th century via the Silk Road.

The peppers took root, literally, in the warmer Western province, as both chefs and gourmets immediately embraced the culinary stimulation of this new spice. Soon, it was firmly ingrained in local gastronomic traditions.

There are three main epicurean styles that have adopted the chili pepper as their own. The most recognized perhaps is the mala of Sichuan cooking - a numbing spiciness that comes from a mix of fresh and dried chili peppers and green and red Sichuan peppercorns, the native prickly ash berries.

Mala, an intensely spicy and oily flavoring, has become popular nationwide, following the migratory path of the Sichuan mala hotpot, and its cousin the malatang, which is skewers of meat, vegetables and tofu products dipped and cooked in a fiery sauce. And then there is that prickly supper favorite of urban night birds, mala crayfish.

Next is the xiangla of Hunan cuisine, a fragrant spiciness that depends on the smoky heat of red peppers, often caramelized to extract a sweet heat. This is true heat, and it is in classic Hunan cuisine - Xiangcai - that we see the chili pepper in all its incendiary glory.

Even in Hunan home cooking, red and green chilies are used as vegetables, stir-fried on their own. They are also used as seasoning, chopped up, minced and stir-fried in hot oil to optimize the pepper's natural fragrance.

Visit any fresh market in the province and you will see stalls with stacks of fresh peppers piled up high. Demand is such that Hunan is also the largest importer of chili peppers from all around China, from Hainan island, Sichuan and Yunnan provinces, and the Guangxi Zhuang autonomous region.

It is also in Hunan that the central agricultural department has established a chili pepper research center, and new varieties of peppers are constantly bred, grown and nurtured.

A classic Hunan favorite is a large fish head, either of grass carp or crucian carp from the region's many lakes, smothered in a seasoned chili sauce and then steamed. This is Hunan's famous chopped chili fish head - duojiao yutou - a dish that brings tears of joy to any homesick Hunan spice girl or boy.

Even the local version of red-cooked pork belly, or hongshaorou, is spiced up with garlic and chili peppers, a dish reputedly served to Chairman Mao Zedong every day. He was, of course, Hunan's most famous son.

The last spicy category is suanla, the spicy-tart flavoring popular in Yunnan and Guangxi, places where people also enjoy the heat of the chili pepper. Here, however, they add vinegar or tamarind juice to the mixture to make it all their own.

In Yunnan, the heat and humidity often means people like salads and cold-tossed dishes. While the hot rice noodles, or mixian, are signatures of the local cuisine, lip-puckering tart and spicy cold noodle salads are just as popular.

The flavors are strong, to say the least.

Hot roasted chili oil, seeds intact, is dressed with vinegar, salt and sugar and tossed with blanched slippery rice noodles. Heaps of local dill, mint and cilantro are added to refresh the palate.

All over the southwestern region, chili peppers have become an indispensable seasoning. At every dining table it seems, a bowl of vinegarish chili dip is ubiquitous, ready to spice up noodles, rice, vegetables or meat.

Not everybody remembers the long journey the chili pepper took from its original home in Mexico, via Europe and then overland via the long, tedious Silk Road to China. All that matters to its ardent fans is that it's here to stay.

Prepare the fish headby cleaning it thoroughly, removing the bloodline inside the abdominal cavity, the gills and the black membrane lining the stomach. Slice the fish head and open it flat, skin-side up.

Smash the spring onions and whole gingerand squeeze them hard in the cooking wine to extract the flavors. Pour the marinade over the fish and leave for 15 minutes.

Prepare the chopped chili sauce.Heat up the oil in a large wok and add chopped garlic and ginger. Fry for a minute to release the fragrance, then add chopped chilies and salted black beans. Stir-fry over high heat until the mixture smells good. Add half a cup water or fish stock, then lower heat and cook another five minutes. Taste and adjust seasoning with salt and sugar. Sugar will take away a little of the heat.

While sauce is simmering, remove fish head from marinade and drain.Place on a large platter for steaming. Remove sauce from fire and pour immediately over the fish head. Steam over boiling water for 18-20 minutes.

Serve with plenty of steamed white rice and lots of Chinese tea.It will be spicy. If your tolerance is low, you can seed the chili before chopping.

This vinegar dip wakes up any humdrum home-cooked meal.

Some crushed toasted peanuts, to taste

Place chili flakes, peanuts and sesame seeds in a large bowl.When oil heats up to a sizzle, pour over chili flakes mixture.

Best made fresh every meal.