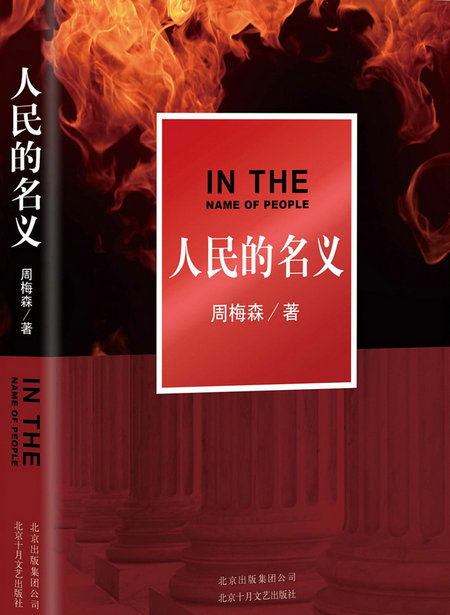 In the Name of People. [Photo/amazon.cn]

The novel behind the popular television drama In the Name of People has sold out in bookstores, both online and hard copies, around the nation.

According to Douban, a major Chinese arts and culture portal, the selling of the novel ranks the first both on China's largest online bookstore dangdang.com and leading e-commerce operator jd.com. The kindle version of the book has also been a hit seller on amazon.cn.

Now, the book is only open to booking on dangdang.com and jd.com. On amazon.cn, the paper copy is available but can only arrive after April 16.

Written by Zhou Meisen and published in January, the 54-chapter novel focuses on Chinese politics and officialdom in the ongoing campaign against corruption.

Before the release of the TV series on March 28, the drama adaptation has been staged at the Poly Theatre in Beijing on March 8-11.

Audiences to the television version that consists of 55 episodes, have been drawn to watch the series by the tension, drama and struggle of characters featured. Since the TV adaption has been a slow release, many viewers have bought a copy of the original book to get ahead.

Yet those who haven't got the book may find it difficult to buy the paper copy at present. And popularity of the book is beyond many sellers' expectation.

"We never thought the book would be so popular and didn't stock enough copies," said a book shop assistant, Chen Yan, who is based in a branch of Xinhua Bookstore in Shanghai. "And now buyers will have to wait."

Chen went on to state the estimated time of the new stock, which should be around April 18.

Followers can't wait turn to the digital version. On yuedu.163.com, an online reading platform, the book has been read by more than 170 million people and had 2,000 reviews.

According to Baidu Index, a majority of readers are aged between 25 and 39, and those aged 30 to 39 cover 51 percent of the readership.

"I can't wait to read the book when I finish episode 5 of the TV version," a netizen 2S said, "It is undoubtedly an excellent book, revealing the fight against corruption."

"The book has 300,000 words and the TV script 600,000 words. To people who are following the TV series, I personally advise you not to read the book. There are too many stereotyped characters in it. I think the TV adaption is more interesting," a Douban user Li Xiaobu commented.