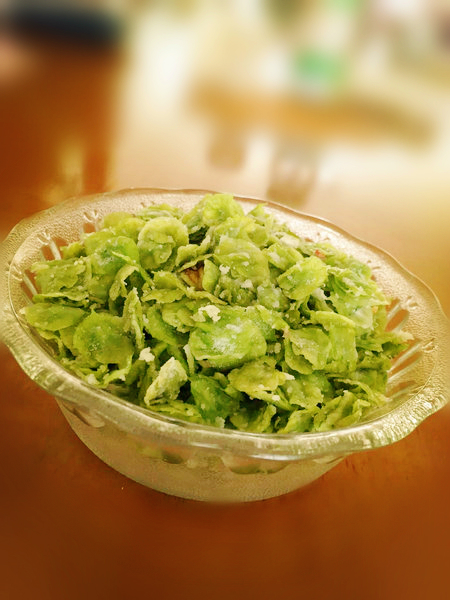 Yu qian (literally meaning left money), or the seeds of elm trees, got the name from its resemblance of coins used in ancient China.

The seeds, often mistakenly considered flowers of elm trees, are found around March and April each year.

Each spring, my mother goes outside with her friends to pick yu qianand use them to cook some dishes.

She often blends the green flower-shaped seeds with a little flour and steam over a strong fire for 10 minutes. After she adds a little sesame oil, crushed spring onion or chili sauce, the seeds become soft and taste fresh.

In the past, people who didn't have enough food ate this dish often.

Here are five dishes made from yu qianthat are easy to make and nice to eat.

Different from the recipe above, the sweet version requires chopped tomatoes, sliced cucumbers and oranges. With a teaspoon of sugar, the salad tends to improve people's appetites.

Slice a tomato and a peeled orange first. Put yu qian, the sliced tomato and orange in a pot, add enough water and cook for 10 minutes on high. Then add a little sugar to enhance the flavor.

Wash a large bowl of yu qianthoroughly and blend with a tablespoon of flour. Steam blended yu qianon high for 10 minutes. Add some vinegar, soy sauce, sesame oil and mashed garlic and the dish is done.