China will exhibit a dazzling array of minerals and gems in the city of Chenzhou, Hunan province, providing a "visual feast" for both exhibitors and collectors from around the world.

The fifth China (Hunan) International Mineral and Gem Show will be held in Chenzhou from May 18 to 22.

Organized by the Hunan provincial government and the Ministry of Land and Resources, the annual event is said to be the largest of its kind in Asia.

Liu Zhiren, mayor of the city, said that this year's event will provide more kinds of exhibits than previous sessions, covering mineral crystals, fossils and precious stones from across the world.

This will be the first time for this red tourmaline, which industry insiders call one of the world's most mysterious gems, to be displayed to the public in 48 years.

Other rare treasures, such as natural gold, emeralds, aquamarines and fluorite on loan from famous United States, French and German collectors, will also be exhibited.

Many jade pieces and gems in the expo are affordable for ordinary visitors. To guarantee the genuineness of the products, the organizing committee has established a traceability system for the first time.

"All exhibitors must join in the system so that we can track the product information such as manufacturers and raw materials," said Zheng Jianrong, head of Chenzhou International Mineral and Gem Exhibition, a company responsible for the expo's market promotion.

This year's event will provide 2,600 international standard booths and has mapped out seven exhibition zones to showcase fine mineral crystals, fossils, jewelry pieces, jade pieces and tourism resources in Hunan, according to the organizers.

Exhibitors include more than 100 foreign clients from over 50 countries and regions such as the US, Canada, France and Italy, and more than 300 companies from the Chinese mainland.

The Chenzhou International Conference and Exhibition Center will be the headquarters of the expo.

There are also three supporting venues to showcase part of the exhibits: the World Nonferrous Metals Museum, the Hunan Chenzhou Shizhuyuan National Mine Park Museum and the Chenzhou International Mineral and Gem Museum.

More than 10 activities will be held during the five-day expo, including a promotional event to showcase 50 geological tourist spots in Hunan's 14 cities and prefectures.

Due to years of development, the Chenzhou expo is becoming one of the world's major events in the industry and has brought ample business opportunities to Hunan.

As the province's only international-level exhibition, it has helped promote the local mining economy, integrating and complementing it with the exhibition, cultural, tourism and commercial sectors, local officials said.

"Hosting the expo has not only increased Chenzhou's world reputation, but also brought numerous economic benefits to the city," said Yi Pengfei, the city's Party chief.

Total sales revenue in hotel, restaurant, tourism and traffic sectors reached 300 million yuan ($43.48 million) during the third session of the show. Sixteen project contracts were signed during the fourth session, with a combined value of 22.8 billion yuan, Yi said.

As the permanent host city of the expo, Chenzhou is famous for its diverse mineral resources and rich reserves.

It has been called China's Silver City, The Land of Nonferrous Metals in China and The City of Ornamental Stones.

Chenzhou attributes its abundant natural resources to its geographical location, as it is at the intersection of the middle range of the Nanling Mountains and the southern range of the Luoxiao Mountains.

In 2015, the city government labeled the gemstone industry an important emerging industry of Chenzhou.

It also planned to develop the industry into a new multibillion-yuan sector in five to 10 years.

With the rapid development of science and technology, gems and other high-end stone materials can be used in increasingly more fields thanks to the internet plus technology and 3-D printing.

Chenzhou has formed a complete industrial chain ranging from trade in minerals and gems, and silver and gold jewelry production, to related handicrafts and art exhibitions.

The output value of the city's mineral and gem industries reached nearly 15 billion yuan in 2016.

Chenzhou currently has about 200 gemstone processing companies and nearly 100,000 people working in the mineral and gem-related fields.

With a good natural environment and abundant resources, Chenzhou in Hunan province has its own advantages in developing the gemstone industry. Photos Provided To China Daily 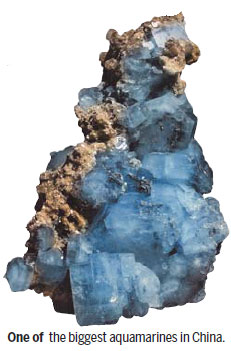