CRRC on the fast track for global expansion 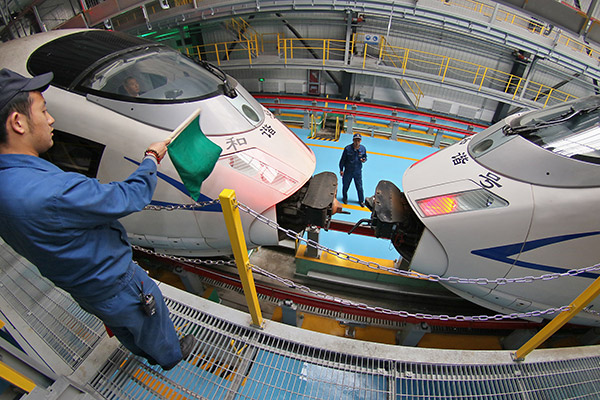 A worker guides two bullet trains to connect at a CRRC plant in Qingdao, Shandong province. CRRC hopes to take a 10 to 15 percent global market share by 2020. [Photo/China Daily]

Editor's note: In the run-up to the 19th National Congress of the Communist Party of China, China Daily will cover a series of key projects and advanced equipment of national importance, showcasing the country's huge improvements and relentless efforts in manufacturing upgrading and innovation.

The 11 regional branches will be set up in countries such as Russia, the United Kingdom, South Africa and Australia. The company wants to manufacture trains, purchase parts, and build maintenance and service facilities through a localization strategy and hiring local employees in key markets in 2020.

CRRC set up its first regional branch for North America in Massachusetts last year. The branch is designed to coordinate its businesses and participate in project bidding in the United States, Canada and Mexico.

CRRC is currently in talks with the Czech Republic's Skoda Transportation AS for a 100 percent stake, a move to increase its market share in Europe's railway markets.

The Czech company mainly produces trams, electric locomotives, carriages and electric buses, as well as traction motors and complete drives for traffic systems. If the deal is sealed, this will be the first time the Chinese group has taken over a full-set rail transit equipment manufacturer.

"Our market development strategy has already shifted from only shipping trains to overseas markets to building a global network to compete with established foreign rivals," said Xi.

CRRC hopes to take a 10 to 15 percent global market share and is expecting to raise the total volume of its overseas orders to $15 billion in 2020.

"Even though a lot of money can be made from selling trains, providing maintenance services and selling trains directly in overseas markets can also be profitable and convenient," said Feng Hao, a rail transportation researcher at the National Development and Reform Commission.

The competition is fierce. Foreign rivals such as Siemens AG of Germany, France's Alstom Group and Bombardier Inc of Canada, have all built their global service and sales networks to boost their sales revenue in major overseas markets in Asia, the Middle East and Europe.

CRRC has so far pushed a number of products, including high-speed trains that can run at 350 kph, middle-to-low speed magnetically levitated shuttles, high-speed commuter trains running at a maximum speed of 140 kph, piggyback wagons, hydrogen-powered tramcars and oil-electricity hybrid locomotive, into both the global and domestic markets.

Hunan-based CRRC Zhuzhou Locomotive Co Ltd, a subsidiary of CRRC, announced last week that it has developed a smart bus to tap lucrative urban transit markets in both the domestic and global markets.

A standard bus is about 30 meters long and equipped with sensors that can read the dimensions of roads and plan its own route, and a standard bus has three carriages with a capacity of 300 people.