Beijing Enterprises Group Co, a major infrastructure builder in Beijing, says it will use Beidou to help accelerate the construction of Tongzhou district, which is designed to be the subsidiary administrative center of the capital.

Beidou is the fourth navigation satellite system in the world, following the GPS system of the United States, the GLONASS system of Russia and the Galileo system of the European Union.

The company signed a deal with the BDS Precise Service System on June 12 to expand cooperation in building smart cities. The BDS Precise Service System was built by the Global Navigation Satellite System and the Location-Based Services Association of China to promote the application of Beidou in diverse sectors including the supply of electric power, water and intelligent transportation.

By using BeiDou to track gas pipelines, Beijing Gas, a unit of Beijing Enterprises, has managed to swiftly locate gas leaks before they cause serious damage.

The move is part of China's broad efforts to boost the commercial application of Beidou technologies. In 2016, the output of China's navigation system and satellite location-based service market - including sales and other associated economic activity - reached 211.8 billion yuan, up by 22 percent year-on-year. 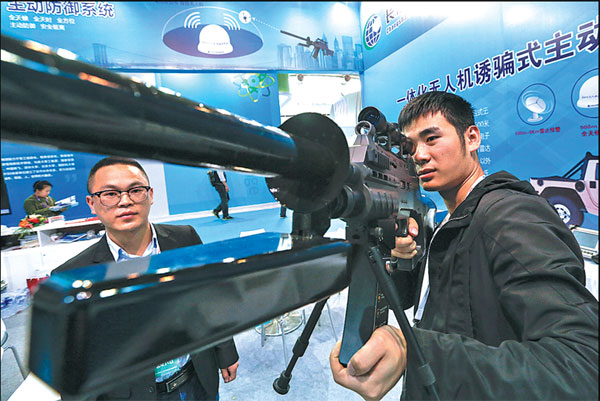 An exhibitor from Beidou Changsha in Hunan province displays an electric gun during an industry expo in Beijing. Kuang Linhua / China Daily