Learning lessons at the grassroots 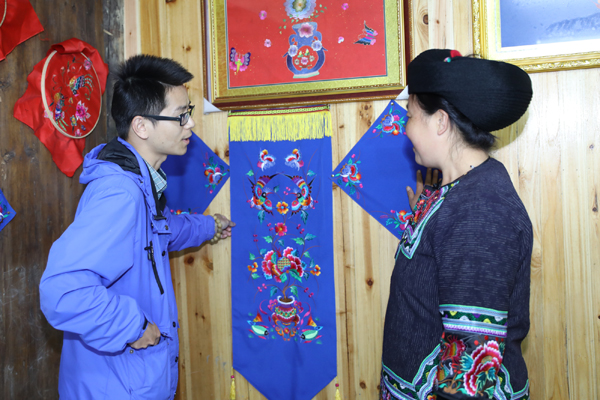 Liu Xiangrui speaks with a member of a Miao embroidery and dress cooperative in Huayan, Hunan province. Wu Hongyan / For China Daily

Editor's note: In the run-up to the 19th Communist Party of China National Congress, China Daily sent six reporters to live in poor villages for a month to see how China's poverty eradication plan is improving people's lives. Three of those stories were published on Wednesday, so these are the final three personal accounts of life in some of the nation's poorest regions.

My month in the countryside was a rare opportunity to spend an extended period observing and experiencing the lives of the residents of a remote village that is home to people from the Miao ethnic group.

Before I arrived in Shibadong, in Huayuan, Hunan province, I was expecting to find a stereotypical ramshackle village. At least, that's what my knowledge and impressions of villages in other poor, mountainous regions had led me to believe.

However, during my interviews with villagers, I learned that Shibadong was indeed once run-down, but that was several years ago.

Present-day Shibadong is totally different, and it offered surprises from the beginning of my trip to the end.

The road to the village is a well-built blacktop which zigzags along the mountainside and overlooks a valley. The village is clean and tidy, and the traditional-style wooden houses are well maintained. Located at the top of the mountain, the superb views, lush greenery and clean air make the village a popular destination for tourists.

However, you have to learn from the villagers' own mouths how they and their ancestors suffered from a lack of arable land, inconvenient transportation links and a dearth of clean drinking water - the main causes of poverty.

That was before the changes that have happened in the past few years.

The first road capable of being used by motorized vehicles was built in 2001 by mobilizing the entire village under the guidance of the old village chief Yang Wuyu. Before that, only narrow mountain paths existed.

"We dug the road hoe by hoe, and it took three years to complete," recalled Yang, adding that many senior villagers used crutches to attend the completion ceremony, where they saw a car for the first time.

At the time, the village was still very isolated. When President Xi Jinping paid a visit in 2013, he passed by the home of villager Shi Basan and stopped to shake her hand. However, the villager, 64 at the time, didn't recognize him and asked "How should I address you?" Her comment aroused surprise among bystanders.

During his visit, Xi stressed the importance of "precision" in eradicating poverty, saying that poverty alleviation should be based on real situations, must be targeted at the right people and industries, and appropriate methods should be used.

Since then, the local government has endeavored to explore new methods and develop suitable industries to eliminate poverty in areas such as Shibadong.

One of the biggest projects is a collectively owned kiwi fruit plantation, which was started in 2015 when the villagers pooled the relief funds provided by the government - about 6,000 yuan ($884) per person - some of the villagers' own money and investment from an agricultural company.

Without enough farmland, they creatively transferred land and rented about 67 hectares from another village. They then mortgaged the land management rights to secure a bank loan of about 10 million yuan so they could farm the extra hectares. The kiwi trees will start bearing fruit this year, and the plantation is eventually expected to bring each villager about 10,000 yuan every year.

As a reult of the growing number of tourists, many cooperatives, such as one for raising pigs and another to cultivate honeybees, are flourishing, as are family-based businesses, such as home restaurants.

In 2014, the original road was upgraded and widened to 6 meters, thanks to money from a special poverty alleviation fund. The village infrastructure and people's homes have also been renovated via a joint program between the local government and the villagers themselves.

The greatest change, in addition to the financial improvement, has taken place in the villagers' minds, according to members of the poverty alleviation team who live in Shibadong.

Encouraged by the improvements in the past few years, the villagers are now confident and optimistic, and they all aspire to a better life through hard work.

"The villagers are more cooperative and have a strong sense of participation because they can see the blueprints we promised several years ago gradually becoming a reality," said Shi Denggao, Party chief of the village.

The villagers also have a strong sense of collective honor. For example, they are willing to sacrifice personal or family interests to benefit the whole village - one family gave up their farmland to make way for public projects, including a public parking lot and the new road.