Zhao Xiaoyong has made more than 100,000 copies of Van Gogh's works. [Photo provided to China Daily]

The trip to the area helped Yu form bonds with local painters such as Zhao Xiaoyong, who came from rural Hunan province, and Zhou Yongjiu, also from a peasant family. Zhao, Zhou and many others like them became part of Dafen's reputation as a "village of oil paintings"－churning out reproductions of Western masterpieces such as Vincent van Gogh's portraits and sunflowers that end up on shelves and walls worldwide.

The documentary offers a perspective on the relationship between China and the globalized world, Yu says.

"These Chinese painters working intensively to produce copies of Western masterpieces still play the role of cheap labor in the chain of global capitalism. But I think their paintings are different from those industrial products generated on an assembly line," he says. "Their creativity and artistic imagination are reflected in their copies of Van Gogh's paintings."

The origins of Dafen's position as the "world's largest oil painting reproduction factory" can be traced to 1989, when Hong Kong painter Huang Jiang started an oil painting business and gradually gathered a group of painters to reproduce classic paintings.

Zhao alone has made more than 100,000 copies of Van Gogh's works, while Zhou and his apprentice have painted more than 300,000 classic replicas.

Yu believes the phenomenon of Dafen is unprecedented in art history. The peasants-turned-painters come from rural China, yet their personal destiny is in European culture. Yu describes feeling "a kind of artistic power that passes through time and space, integrating Eastern and Western culture".

Yu also started taking pictures in Dafen in 2005, when traditional film still dominated. He took about 20 rolls of film a day and many in the village became familiar with the cameraman sporting long hair.

Huang from Hong Kong gave his support to Yu. After the photographer discussed his ideas with him, Huang took Yu to several studios to meet students whom he had trained earlier.

"I had many conversations with those painters. We sat together to drink Chinese tea. While sampling the tea, I also savored their life stories," Yu says.

Yu became good friends with the painters and they regularly invited him to their homes for dinner, drinks and karaoke.

"Their paintings and lives, expectations and dreams are deeply connected to me," says Yu. "They are used to communicating through the lens and I often kept my sights low to capture their emotions."

Yu's photo story on Dafen won the 49th World Press Photography Contest in 2006. It was also exhibited at the San Francisco Museum of Modern Art and London's Victoria and Albert Museum.

In 2011, Yu began to work with his daughter, Yu Tianqi, on the documentary. 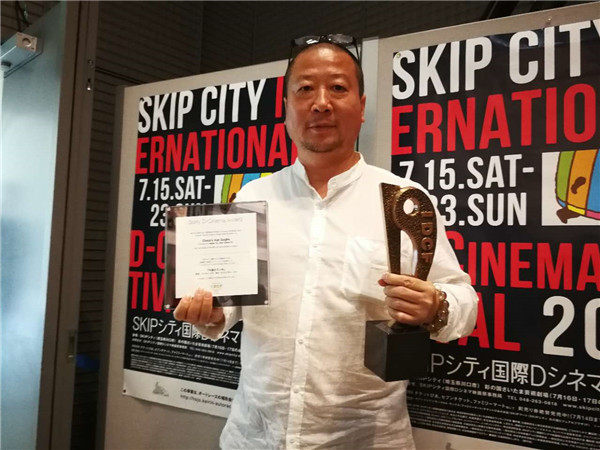 China's Van Goghs shows how the principal subject, Zhao Xiaoyong, feels a sense of affinity with Van Gogh after so many years of being immersed in the Dutch master's brushstrokes. He longed to see Van Gogh's original works. The film recorded his journey to Europe to see what Van Gogh's paintings really looked like.

In a souvenir shop near the Van Gogh Museum in Amsterdam, Zhao saw one of his best clients, an art dealer from the capital of the Netherlands. He was also excited to see his reproductions being sold. When Zhao learned that the retail price of his work was more than 10 times what he was paid, he fell silent and kept smoking. When he eventually arrived at the museum and stood in front of the original works of Van Gogh, he was not as excited as expected.

"In Europe, we talked heart to heart late into the night. It was a thought-provoking journey for Zhao. He began to reflect on the meaning of Van Gogh's work as well as the value of his own art," Yu says about Zhao.

One of the most-asked question by audiences who saw Yu's documentary was: "What is the current situation of the painters?"

For Zhao, after returning from Europe, he began to paint original works instead of copying classics. He gradually moved to Zhejiang province, where he opened a gallery in Ningbo. Most of his works are now sold in China. Other painters are also making bold attempts at defining their own art.

The struggle from "copier to creator" mirrors the complexity of the transition from "made in China" to "created by China" in the 21st century, Yu says.

"Dafen is exploring a new development path by producing original artworks and creative, art-related products. New forms of art and artists might also spring up in the future."