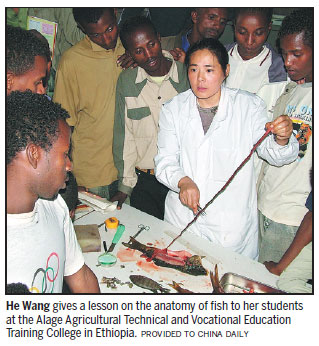 For many Chinese people, Africa is not only far away, but also strange and wild. He Wang, however, has spent most of the past decade living on the continent.

She has just left her 92-year-old mother for the eighth time to visit Africa, where she stays for more than 10 months at a time.

While He was busy packing at home in Changsha, Hunan province, her mother repeatedly came into her room. It seemed the older woman had something to say, but she didn't speak, He recalled.

"When I was leaving, she sighed and said she doubted if she would see me again the following year," said He, who is a researcher with the Hunan Institute of Aquaculture Research.

Yet she said she is determined to continue her work to help Ethiopia develop its aquaculture.

He is one of more than 400 Chinese experts who, since 2001, have taken part in an aid project funded by China's Ministry of Commerce. These experts have worked in 13 agricultural colleges, teaching and drafting textbooks.

Even during her two-month stay at home, He often stayed up until midnight drafting Ethiopia's first fish production textbook.

Before she left on Oct 16, she went to a publishing house in Beijing to talk about the publication of the textbook. The 53-year-old said she has almost finished the draft and expects to use it in her teaching this year.

In addition to the textbook, He has four big suitcases, which contain daily necessities, kitchenware, teaching aids and gifts for her friends in the Alage Agricultural Technical and Vocational Education Training College, where she works.

"Each time I go, I take as much with me as possible, as it's difficult to buy things there," she said.

The nearest town to the college is Bulbula, 50 kilometers away, while Addis Ababa, the nation's capital, is a further 190 km to the north.

Cars are a rare sight on the unsealed road from the college to Bulbula, and are always followed by a thick trail of dust.

When He first went to Ethiopia to teach in 2013, she was astonished to find she had to start from scratch, as there were no textbooks and few facilities available for her to use in the 4,200-hectare college. Students had to travel to a farm more than three hours away for practical experience.

With no machinery or engineering experience, she spent four months digging a 200-square-meter, 1.5-meter-deep fishpond with students and colleagues. The project led to He being given the nickname "the Iron Lady".

So far, 13 fishponds have been built on the college grounds. Students also now have other equipment thanks to He, such as microscopes and pH test strips.

"Power failure is no stranger. Heavy winds and rainfall sometimes result in power failures of up to a week," she said. "Outages cause a lot of trouble. Food in the refrigerator goes bad and there is no internet access or phone services."

There is also usually no water supply to the college in the afternoon, and sometimes after 10 pm, she added.

Before Alage, He worked in the Holeta ATVET College from 2003. In 2009, she went to Zimbabwe for a year.

Although Holeta is only 40 km from Addis Ababa, life there was hard. Without access to phone services, it was difficult to keep in touch with family and friends. The water supply was unstable, and students and teachers had to use a horse-drawn vehicle to travel to the market to buy vegetables.

Over the years, He has helped Ethiopia cultivate more than 1,000 aquaculture experts, many of whom have played key roles in the country's agricultural development. In July, she received an award from the Ethiopian government for her contribution.

With her recommendation, one of her colleagues, Endashaw, completed his master's degree in genetic engineering in the South China Agricultural University and is planning to continue his studies in China.

"Endashaw told me a journal in the United States may publish one of his papers, which will help him to continue studying in China," she said.

She said she felt sorry for her family, as she has spent little time with them in recent years. In November, she had to leave for Ethiopia on the day of her daughter's wedding. But her family has been supportive of her work, He said.

Her husband, Zou Zhongyi, said of his wife: "She has responded to the country's call. Her work is of great significance. We all support her."