Land of the peach blossom beckons once more 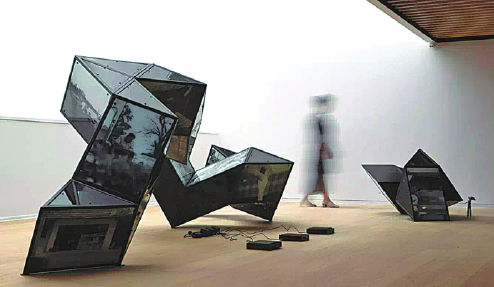 An installation of sound and photos is one of many avant-garde artworks by top Chinese artists on display in a newly opened art center in Changde, Hunan, in which many locals expressed their interest. [Photo provided to China Daily]

When night falls in the city of Changde in Hunan province, you will find many people playing cards, relaxing with a soothing foot massage or taking part in some other activity to while away the time. A fancy art center that opened in September now offers another choice to those yearning to be involved in cultural activities.

In the inaugural show of the art center, which cost 60 million yuan ($9.07 million) to build, works of top Chinese artists were on display, including those of Xu Bing, known for his large-scale installations, and the sculptor Sui Jianguo.

Following the exhibition were performances of modern dance and music that seemed to leave many of those who saw them perplexed, even if they maintained a polite silence throughout and stayed in place until the two-hour performance－with no intermission－had concluded.

Jiang Han, who is in charge of the art center, says he was surprised about the local audience's eagerness to talk with dancers and directors after the performance.

"They admitted they did not really understand it, but they liked it," he says.

When the likes of Xu Bing and Sui Jianguo were invited to display their works in Changde they were surprised because they thought there would be little interest in their avant-garde art in small cities, Jiang says.

In fact, many of those in the audience said they had never been to a theater or to an art museum before, he says.

Feng Shilin, 76, who lives in a shantytown nearby, has visited the art center twice. One visit was for the inauguration exhibition and performance, and the other for a concert by a local violinist who studies at the Julliard School in New York

"I don't know anything about art, but I can feel its charm," says Feng, who was once a factory worker. "It's great."

The art center is located in a shantytown that is to be cleared and replaced with new buildings. The center, surrounded by the remains of dilapidated buildings and redbrick apartments built last century, was designed by the Hong Kong architectural firm Atelier Global and looks out of place in its current environment, but that will change once everything has been cleared and the new buildings have been completed in six to eight years.

It consists of a theater, an art museum, a bookshop with tens of thousands of books on art, architecture, history and literature, a coffee bar and an education space for children.

"The bookshop is always full on the weekend and has become the most popular one in the city," says Jiang, pointing to a special space in the bookstore that sells English books, including a biography of Andy Warhol.

Many local art societies have approached Jiang, asking about holding activities in the art center. There are more than 100 art societies in Changde, including operas, poetry reciting and tea art, Jiang says.

"We have to provide an art platform for people first and then the seed of art will grow."In October a children's play festival and a series of modern dance and music were held in the art center, and tickets sold out rapidly.

Hu Quanchun, an artist who specializes in public art, was in Changde to take part in a one-month art project in April. He says he was thrilled by people's acceptance of contemporary art. During his stay he held classes at night with his students from the Central Academy of Fine Arts in Beijing to discuss their ideas on what kind of works they would produce. He was pleasantly surprised by the keen interest that locals showed in his classes.

"I think people's passion for art here must be related with the city's history. After all, it was once a breeding ground for poets and writers."

Changde is where the utopia of the ancient poet Tao Yuanming, in his fable The Peach Blossom Spring, is located. In the fable, a fisherman finds a utopian world where people live in harmony with nature and keep a distance from the outside world. The city has also been prominent in works by the writer Shen Congwen.

The artist Zhao Ming, who took part in a residential art project sponsored by the local government, says she thinks the city has the potential to recreate the peach blossom land described in poet Tao's fable.

"It has clean rivers and mountains, and people here are simple and love taking part in artistic activities."