The innovation program's finale event, the BMW China Culture Journey Festival, successfully opened to the public free of charge in Beijing from Nov 10 to 12.

BMW said the three-day finale was transformed into a series of interactive experience events instead of a static exhibition, with the aim to better nurture, rejuvenate and promote the nation's cultural intangible heritage. 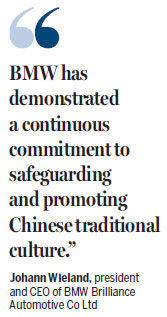 "Based on our vision of 'In China, for China', BMW has demonstrated a continuous commitment to safeguarding and promoting Chinese traditional culture," said Johann Wieland, president and CEO of BMW Brilliance Automotive Co Ltd, at the gala night of the festival. A grand graduation ceremony for 10 inheritors was also held at the gala night. They were recommended by the Hunan Provincial Center of Intangible Cultural Heritage Safeguarding and Tsinghua BMW Innovation Center for Intangible Cultural Heritage Safeguarding during 2017 BMW China Culture Journey's 10-day visit to Hunan province from the end of July to early August. The 10 intangible cultural heritage inheritors completed their studies at the center.

Subsequently, along with the other inheritors from the innovation center, they displayed and sold their unique and creative works at the finale festival.

Together with inheritors with innovation potential and needs, they presented their crossover creative works at the gala night of the festival.

"The achievements of the BMW China Culture Journey in recent years have fully embodied our strategic corporate social responsibility philosophy that 'teaching a man how to fish is better than giving him a fish'," said Wieland.

Wieland said: "At BMW, we always seek to discover insights from social issues. These help us to develop targets, from which we can explore innovative implementation methods."

The ambassadors and inheritors were invited to present their crossover works, including pop songs, gourmet food, handicrafts and fashion shows, at the gala night of the festival.

Such designs showcased the concept of "integrating intangible cultural heritage into modern life" at the Creative Lifestyle Showrooms during the festival.

The luxury carmaker said that 2017 BMW China Culture Journey Festival invited intangible cultural heritage inheritors from around China to showcase and promote creative products. These featured the beauty of intangible cultural heritage, through a handicraft bazaar, interactive experiences and a range of other exciting formats for public engagement.

"In the future, BMW will continue to work in an innovative, efficient and sustainable way to safeguard and promote Chinese traditional culture and create more shared values for Chinese society," Wieland said. 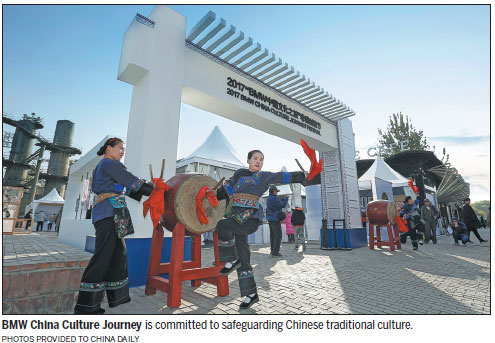 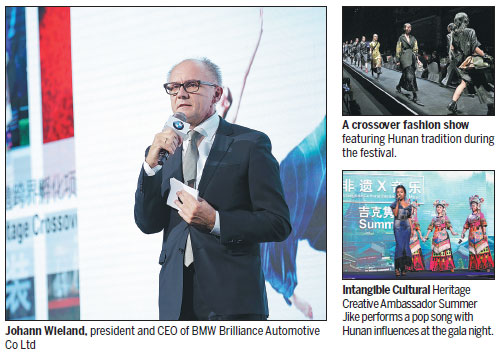