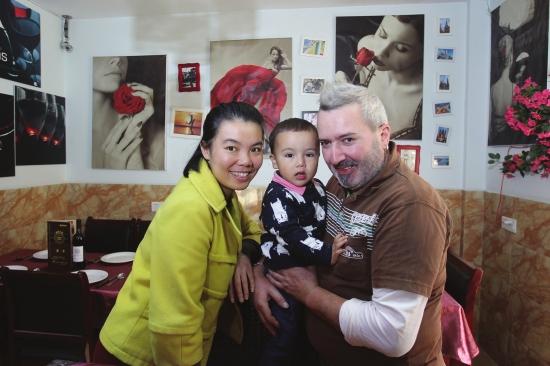 Mario, a German, opens a restaurant in Changsha. The photo shows his wife Liu Pei(left), his son and Mario (right), October 26, 2017.

On October 26, German restaurant Mario and his Changsha wife Liu Pei, along with their 2-year-old son, opened the restaurant.

Mario's opens his restaurant in the district where he lives. His restaurant is with a sign of 柏林小镇 (meaning Berlin Town) in several Chinese characters.

Mario is a chef and he has worked in Michelin-starred restaurants in several countries. Ten years ago, Mario came to Hangzhou, Beijing and other places and later he settled in Changsha City. He worked in a beer house, later he worked as a chef in a hotel, where he met his wife Liu Pei who worked in the hotel. The two got married and later opened the restaurant together.

As a star-up in Changsha city, Mario witnessed the change that brought him entrepreneurial convenience. For example, the ingredients in the store are all airlifted from Germany to Changsha within four days. Mario said that it is just 16 hours of direct flights from Frankfurt to Changsha."Changsha government service is getting better. We used to wait for a long time for certain service, but now any service can be done in about half an hour."