Luxurious resort in Hainan is the venue for awards ceremony for the Jack Ma Foundation, Liu Xiaoli reports.

Sitting in the plush lobby of Shangri-La' s Sanya Resort &Spa - after having taken in the magic of the surrounding sea, and felt the sea breezes and gentle rhythms of the coconut trees outside - Ma Yulan is truly content.

The 55-year-old teacher at a village school in Hunan province never dreamed she could visit the resort city, let alone experience this kind of ultra luxury hotel.

Ma has been teaching at the Hanglai rural school in the Xiangxi Tujia and Miao autonomous prefecture in Hunan for 20 years, since she became its only substitute teacher in 1998.

A 4-kilometer commute to work is a set routine in her life. 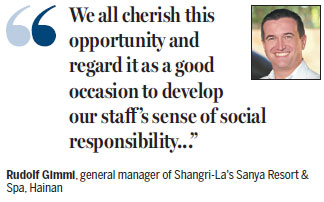 Without any colleagues, Ma also works as a housekeeper, cleaner, chef and even repairman. But then she became a prizewinner in a campaign launched by e-commerce giant Alibaba to reward rural teachers nationwide.

That's what gave her the chance to take the flight and reside for a while in the luxury hotel in Sanya. It has been a life-changing experience: she had never seen the sea before.

The Jack Ma Foundation hosted the awards ceremony at Shangri-La' s Sanya Resort &Spa, Hainan, on Jan 21. It was the third year that the foundation held the event.

A total of 100 rural teachers from 28 provinces, municipalities and autonomous regions in China were given awards at the ceremony, for their contributions to education in rural China last year.

Besides Ma Yulan, the award winners included those from Yunnan, Guizhou, Sichuan, Shaanxi and Gansu provinces, and the Ningxia Hui autonomous region.

The educators each received a cash prize of 100,000 yuan ($15,500) and will start three years of professional skills training provided by the foundation.

The billionaire businessman, a former English teacher in Hangzhou, Zhejiang province, launched the program in 2015 to support rural education, and pledged to donate 10 million yuan annually to carry out the plan.

The Jack Ma Foundation announced a new plan in late 2017 to invest at least 300 million yuan to encourage graduates of teaching colleges, called normal schools, to educate in rural areas over the next decade.

Like Ma Yulan, some of the awarded rural teachers also saw the sea for the first time and experienced the unimaginable services of a luxury resort.

It was the third time for the resort to host the event, as its exclusive hotel partner.

Considering that most of the rural teachers were from areas where Chinese dialects are predominantly spoken, the resort set up a volunteer team with 100 employees to make teachers feel at home.

"The caring service provided by the hotel and the volunteer team eased my anxiety over being far away from home," Ma Yulan said.

Rudolf Gimmi, general manager of Shangri-La's Sanya Resort &Spa, Hainan said: "We all cherish this opportunity and regard it as a good occasion to develop our staff's sense of social responsibility by learning from the rural teachers and their giving spirit."

Since 2016, the resort has set up a support program to help the students in Bingcun Primary School in Haitang Bay in Sanya. Of the students, 31 were from villages near the hotel.

The resort staff has donated more than 200 books, and organized fundraising for charity groups. The donations were used to build a library in the school.

In addition, the hotel delivers a free nutritious breakfast specially made for the students at the school once a month.

The hotel's volunteers also want to help sharpen the teachers' educational skills. The hotel gave the school a number of second-hand computers and offered teachers training to help give the students better access to the outside world.

The resort's volunteers also helped the teachers to give students English lectures and training, as well as information about the environmental protection and natural resources.

To improve guests' awareness about the protect of Hainan gibbons, the resort created a mascot called Loo Hoo, based on the ape's image.

Hainan gibbons, found only on Hainan island, have been identified as a critically endangered species on the International Union for Conservation of Nature's Red List.

An education center has been established in the resort where guests can learn more about the animal.

Shangri-La's Sanya Resort& Spa, Hainan, has received thousands of guests since it opened its doors to visitors in 2014.

Its facilities include an adventure zone, a water park, pools, a zoo, archery, a Funventure Boot Camp and a 9,000-square-meter lawn.