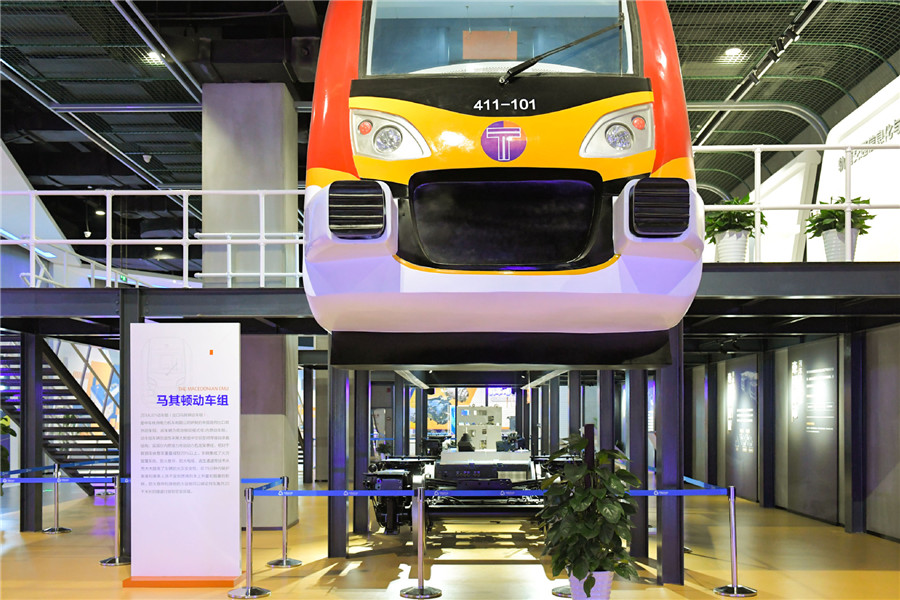 A bullet train model of Macedonia exhibited at the rail innovation hub in Zhuzhou, Central China's Hunan province, May 14, 2018. [Photo/Xinhua]

BEIJING — It was freezing cold in early spring in Astana, Kazakhstan, where the temperature had plummeted to minus 20 degrees Celsius.

In a shabby workshop, Long Guzong and his co-workers were working away in heavy clothing that made their movements astronaut-like.

After months of tests and adjustments, the technicians from CRRC Zhuzhou Electric Co., Ltd., based in China's central city of Zhuzhou finally solved a technical problem vital to the train's safe operation in extreme coldness.

"The biting coldness was impressive; we solved the safety problem that had frustrated many experts at the time," Long told Xinhua recently, 11 years after that assignment.

Dedicated to making people's lives easier and better, Long and his co-workers are among tens of thousands of Chinese innovators who are contributing to the country's innovation-driven development.

China's coastal cities can be considered the country's "locomotives" in its development, among them the city of Shenzhen. However, over the past 40 years of reform and opening-up, the middle and western parts of the country have been gradually catching up with the eastern area. The city of Zhuzhou that produced China's first locomotive is a classic example.

Zhuzhou, a small city in central Hunan province, is turning from a traditional industrial base into a Chinese innovation hub, where high-tech corporations, start-ups and innovators gather.

The metamorphosis started with the rapid development of China's rail transit.

Liu Youmei, 80, who worked in the train manufacturing industry for almost six decades, has witnessed the innovation-driven development with Chinese characteristics in China's rail transit history.

"There was no bus or other public transportation linking Zhuzhou railway station and our factory when I arrived at Zhuzhou 57 years ago. On the first day of our arrival, my classmates and I had to walk to the factory and return with a borrowed tricycle with a flat cart to transport our luggage," he said.

In 1961, Liu and some 20 graduates from Shanghai Jiao Tong University were assigned to work in a locomotive factory in Zhuzhou, which was established to repair locomotives imported from the West, where steam locomotives had been used for a century.

To bridge the 100-year gap, Liu and his co-workers worked night after day, and independently designed Shaoshan series electric locomotives, which was the dawn of electrification in China's railway industry.

The veteran engineer, who has been honored by the Chinese Academy of Engineering for his contributions to railway development, said that China must master core technologies in key fields.

"In 1998, we wanted to introduce the DC traction motor train, but developed countries refused our purchasing request, as well as the introduction of supercapacitors," Liu said.

"At that time, we were forced to do research and development independently, and finally broke technological bottlenecks and manufactured DC traction motors and supercapacitors with full intellectual rights; the latter even beat the U.S. industrial leader," he said.

Nowadays, trains with Chinese "brains" and "nervous systems" run around the world. The advanced electric locomotives, metro trains and maglev trains have made Zhuzhou a landmark of world rail transit.

Moreover, the city's general aviation and automobile industries have made names for themselves and its innovation park is attracting industries like electronic information, new energy, bio-medicine, as well as environmental protection, among others.