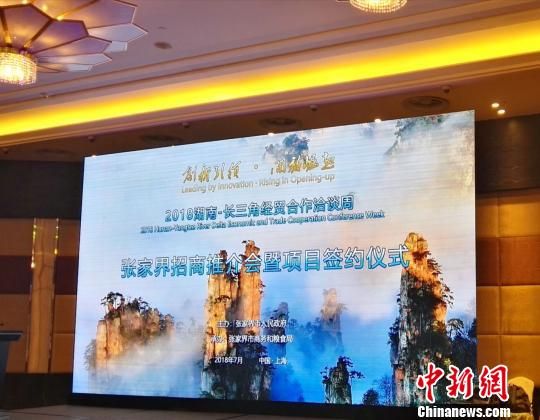 Zhangjiajie holds investment symposium with the Taiwan Businessmen Association of Shanghai on July 23.

The Hunan-Yangtze River Delta Economic and Trade Cooperation Promotion Week is about to begin. Zhangjiajie held an investment symposium with the Taiwan Businessmen Association of Shanghai and opened its investment promotion conference and project signing ceremony in Shanghai on the morning of July 23. At the conference, deputy secretary of the CPC Zhangjiajie Municipal Committee Liu Ge’an said that Zhangjiajie has made full use of its unique tourism resources to build a city suitable for visiting, investing, and living. Equal attention has been attached to both environment protection and economic development. Priority is always given to environmental protection as protecting natural resources is a precondition of Zhangjiajie’s development.

Since becoming a separate city 30 years ago, Zhangjiajie has transferred itself from a relatively unknown city into a well-known, world-wide, tourist destination. It has 6 forest parks, 7 natural reserves, and over 300 scenic spots including 2 national 5A-level scenic areas. These include mountains, gorges, karst caves, hot springs, lakes, streams, and primeval forest.

It was announced that Zhangjiajie will conduct comprehensive economic and trade cooperation in the Yangtze River Delta area.