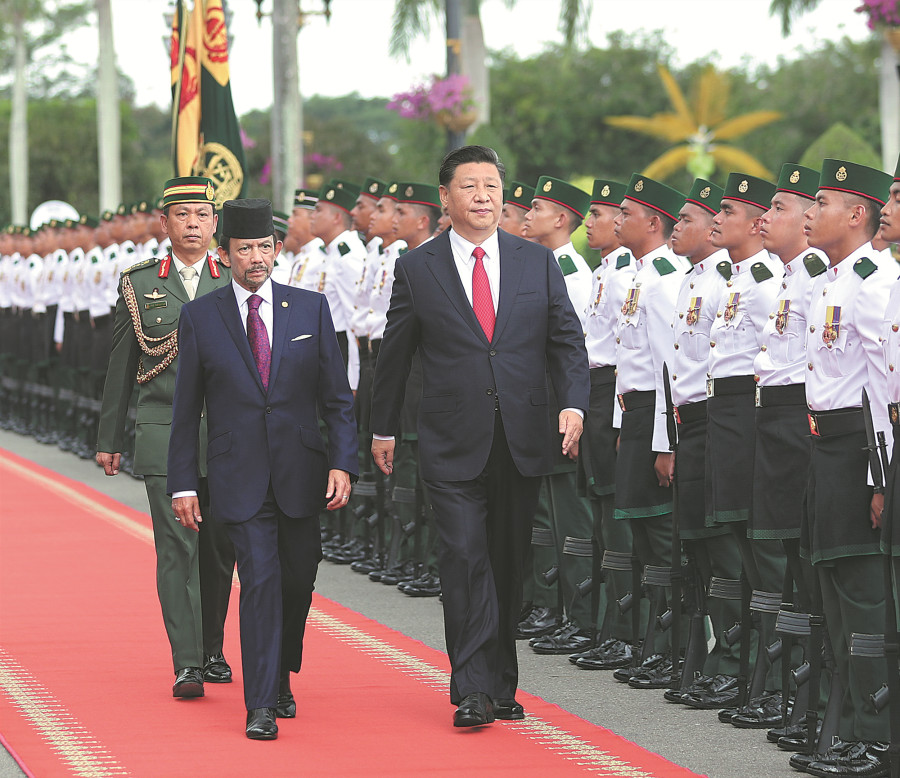 President Xi Jinping is accompanied by Bruneian Sultan Hassanal Bolkiah at a welcoming ceremony on Monday in Brunei's capital, Bandar Seri Begawan, during his state visit to the country. JU PENG / XINHUA

China appreciates Brunei's proposal to handle disputes via peaceful negotiations between the countries involved and safeguard the stability of the South China Sea through efforts jointly made by countries of the region, President Xi Jinping said on Monday.

Xi made the remark while meeting with Bruneian Sultan Hassanal Bolkiah in Brunei's capital, Bandar Seri Begawan, during his state visit to the country.

Safeguarding peace and stability of the South China Sea is related to the interests of China and Brunei, and it is also the common wish of both countries, Xi said.

The two countries should continue to promote maritime cooperation and build the South China Sea into a sea of peace, friendship and cooperation, Xi added.

Before their talks, the sultan hosted a grand ceremony to welcome Xi. After their talks, the two countries agreed to establish a strategic cooperative partnership. The two nations issued a joint declaration and signed a number of cooperation documents.

Mentioning that it is his first visit to Brunei, Xi said that he was deeply moved by the sincere smiles on the faces of the young people who welcomed him along the road.

China and Brunei, with a long history of cultural exchanges, are not only close neighbors separated by the sea, but also trustworthy friends and partners, Xi said.

Xi said the two countries should enhance high-level exchanges to provide guidance for the development of bilateral relations.

China appreciates Brunei's firm stance on supporting the one-China policy, Xi said, adding that China will continue to support Brunei in developing a path that fits its own national situation.

The president welcomed Bruneian companies to expand exports to China, saying that China would like to enhance cooperation with Brunei in infrastructure, agriculture, fisheries and energy.

The two countries should enhance coordination under such frameworks as the United Nations and Asia-Pacific Economic Cooperation, and jointly promote the development of relations between China and the Association of Southeast Asian Nations, Xi said.

The sultan welcomed Xi's visit, saying that it would deepen traditional friendship and promote mutually beneficial cooperation between the two countries.

He reaffirmed Brunei's firm stance on upholding the one-China policy. Brunei would like to take the opportunity of the visit to enhance bilateral cooperation in such areas as trade, investment, agriculture, tourism, education, people-to-people visits and justice to bring benefits to the people of both nations, he said.

Brunei would like to connect development strategies with China, he said, adding that Brunei spoke highly of China's role in promoting the stability of the world.

It's good for Brunei to see that countries in the region have jointly maintained the peace and stability of the South China Sea and promoted maritime cooperation, he added.