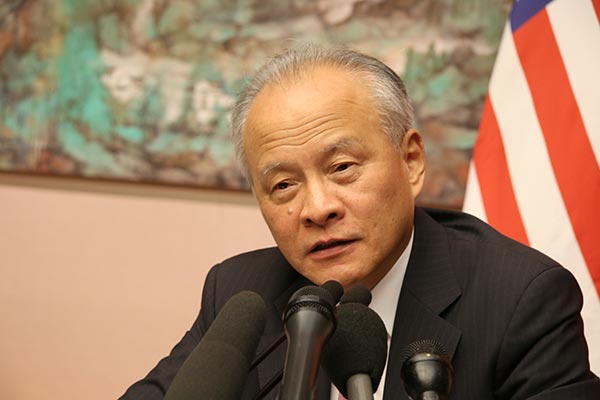 China's ambassador to the United States Cui Tiankai said that he hoped the meeting between Chinese President Xi Jinping and US President Donald Trump will enable both sides to make further progress on the trade and other issues.

In an interview with The Wall Street Journal that was published on Monday, Cui said he would expect the two presidents to review bilateral relations between the two countries when they meet during this week's G20 in Buenos Aires.

"I think it's necessary for the two leaders to review the developments of the relations, and also give us a clear strategic guidance on where the relationship is going and how the two sides should conduct this important and complicated relationship together," Cui said.

"Hopefully, this meeting will enable us to make further progress on many fronts, including on the economic and trade issues," he added.

Cui said that the Mar-a-Lago summit between Xi and Trump in April 2017 was a great success.

"I think both our leaders were happy about their first meeting. They got to know each other. They were on very friendly terms," he said.

On negotiations between China and the US to settle the current trade dispute, Cui said, "For a negotiation like this, people have to make their position clear and consistent. If their position is shifting all the time, I don't think it's helpful for any negotiation."

The top Chinese envoy in Washington said that if there is some agreement, people have to remain committed to this agreement and try to make further progress.

"You cannot have some tentative agreement one day and reject it the next day," he said.

"We fully understand that the US side, the current administration, they love the principle of mutual respect, fairness and reciprocity. Then people make all of these comments and statements without any sense of mutual respect, without any indication of fairness. How can we have mutual confidence to proceed with a negotiation?'' Cui said.

Cui also said that China and the US have to be fully aware of "our shared responsibility to the global economy, the prospects of global economic growth.

Asked if he was concerned about the possible economic fallout from the trade battle, the ambassador said, "The problem is that if things go on like this, there's a real risk the global market might become fragmented."

When asked about complaints from US companies that they were treated differently in China now, Cui said he thinks that clearly there's more competition in China compared with 40 years ago, because the Chinese economy has grown, and Chinese companies are also learning how to be internationally competitive.

"But still, bilateral trade has been growing so fast. It has benefited both countries. As people do more bilateral trade and investment with each other and there is more and closer contact between each other, competition will also increase. This is just a fact," he said.

"We even set up special courts for intellectual property cases. We also discourage or even prohibit forced transfer of technology," he said.

When asked about some companies that said they are being pressured by Beijing to hand over technology, Cui said for some of the cases of transfer of technology, it's not forced transfer.

"These are commercial deals between the companies. If people don't like the deals, they can certainly walk away. Nobody is forcing them to do these deals.''