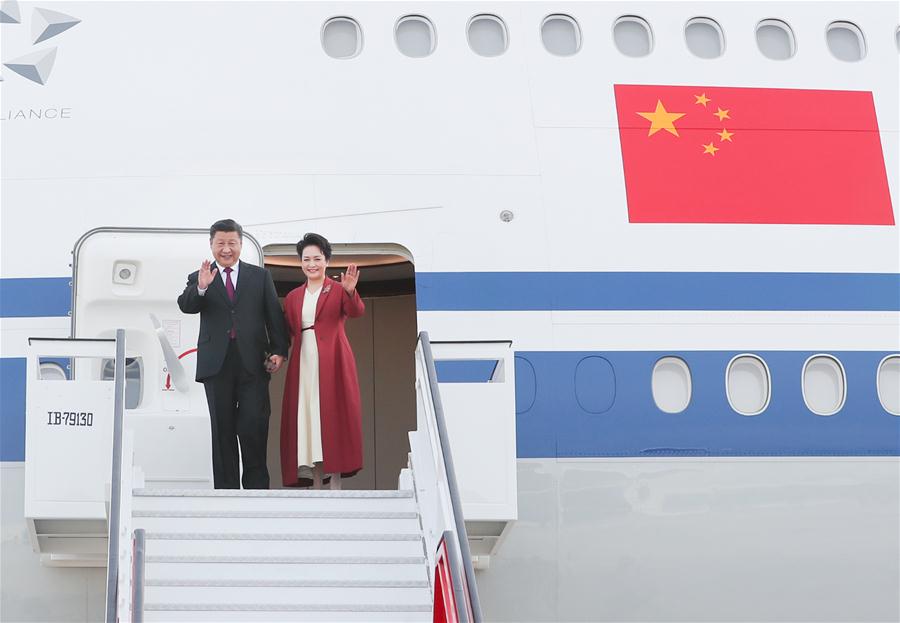 President Xi Jinping and his wife, Peng Liyuan, disembark from the plane in Madrid, Spain, Nov 27, 2018. Xi Jinping arrived in Spain on Tuesday for a three-day state visit. [Photo/Xinhua]

President Xi Jinping arrived in Madrid on Tuesday, kicking off the first visit by a Chinese head of state to Spain in 13 years.

Upon his arrival in the Spanish capital, Xi said in a written statement that expanding pragmatic cooperation between China and Spain will not only bring benefits to the people of both countries, but also contribute to global peace and prosperity.

The president said that he will meet with Spanish leaders and exchange views on bilateral relations and issues of joint concern to both nations to promote the China-Spain comprehensive strategic partnership.

In a signed article published on Tuesday in the Spanish newspaper ABC, Xi said a major aim of his trip to Europe and Latin America and his attendance at the G20 Summit in Argentina is to discuss with leaders of major economies ways to strengthen unity of the international community and improve global governance.

Xi said he is glad to have Spain, a beautiful country rich in natural resources, as the first stop of his trip. The nine-day trip will also bring him to Argentina, Panama and Portugal.

Though geographically far apart, Xi said China and Tarragona in Spain were first connected over 2,000 years ago via the ancient Silk Road, and were drawn to each other's culture.

Bilateral relations between the two countries have endured the test of international vicissitudes since diplomatic ties were established 45 years ago, Xi said.

China and Spain have always respected and treated each other as equals, and conducted mutually beneficial cooperation to push forward the sound and stable development of their relationship, he added.

The past years have been a period of deepening mutual trust, increasingly close contacts and a blending of cultures, he said.

The president said he is willing to have extensive contacts with the leaders and people of all circles in Spain during his visit in order to create a better and brighter future for bilateral ties.

To this end, he suggested the two countries consolidate the political foundation of their relationship, strengthen alignment of their development strategies, deepen pragmatic cooperation, expand people-to-people exchanges and maintain close cooperation in international affairs.

This year marks the 15th anniversary of the establishment of the comprehensive strategic partnership between China and Europe, and deepening this partnership is in line with the common interests of both sides under the current situation, the president said.

China hopes and believes that Spain, as China's good friend and good partner in the European Union, will continue to play an active role in pushing forward the sound and stable development of China-Europe relations, he said.