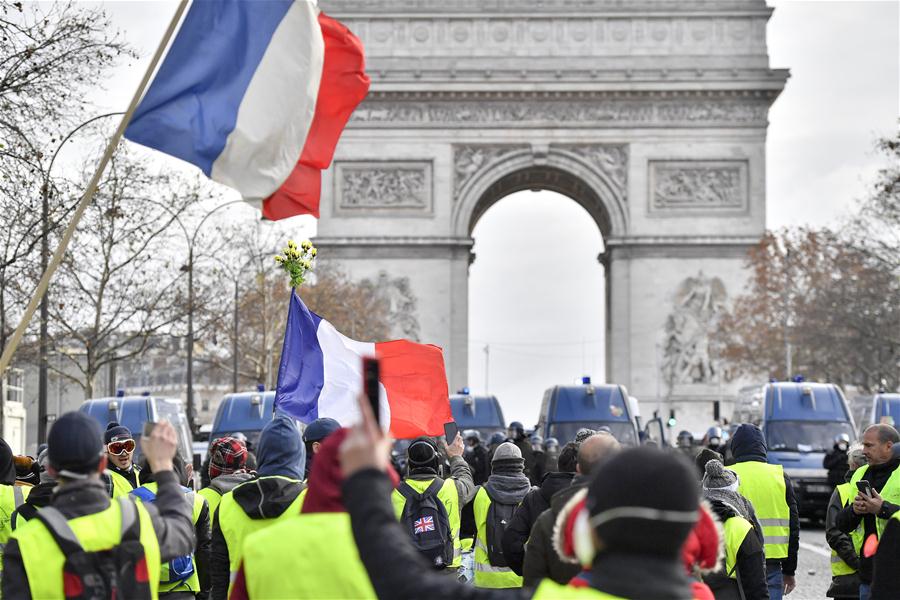 "We must respond to the anger of the moment that we have heard and understood, with strong measures, and also never give up the long time (answers)," he said.

"However, not all the problems of the "Yellow Vests" protesters will be solved by waving a magic wand," he added.

In an interview to RTL, Le Monde newspaper and LCI, Foreign Minister Jean-Yves le Drian said "President Emmanuel Macron will speak and send a strong message to the nation." But he did not give details on the planned measures and the exact time of Macron's speech.

Facing his worst street challenge, the French president is expected to reach out to nation "early next week" on television to try to convince people to keep faith in him to restore economy and handle social strains.

"I think this is what the French people want, they want answers. The president will send the message to the French that he is listening to their anger and that new solutions have obviously to be found," Transport Minister Elisabeth Borne said earlier this week.

Created on social media, "Yellow Vests" movement, referring the high visibility vests drivers keep in their cars, has lured people of all ages and backgrounds.

With no leader, it had turned into a bigger protest denouncing a squeeze on household spending, high living costs caused by Macron's fiscal and economic policy which they say favors the rich. Some of them asked Macron to step down.

In his last speech on Nov. 27, Macron said "I understand this rancor ...What has been said needs to be heard more deeply, society needs solutions...," refusing "to set up a two-speed France where the most modest will have to pay more..."

Since then, he offered a series of concessions that began with a review the rate of tax on diesel and petrol every three months to take into account changes in global prices.

Failing to quell the anger, he capitulated this week over plans for higher fuel taxes, his major U-turn since he took office.

For now, the protest shows no sign of abating. Protesters still demand concrete moves, notably a rise in minimum wage and lower taxes.

Offering more concessions, French Prime Minister Edouard Philippe on Thursday said he was open to new "measures that will help raise the pay of those on the minimum wage without doing excessive damage to our competitiveness and businesses."

"His speech will be decisive to know if there will be an "Act V" (fifth wave of protests,)" he added to BFMTV news channel.

Staging the fourth weekend protest in a row, 136,000 "Yellow Vests" turned out across the country to denounce Macron's leadership which according to them, aims to court big business and do little for lowest-paid workers.

According to the Interior Ministry's figures, 2,000 individuals had been detained countrywide, with 1,700 remaining in police custody.