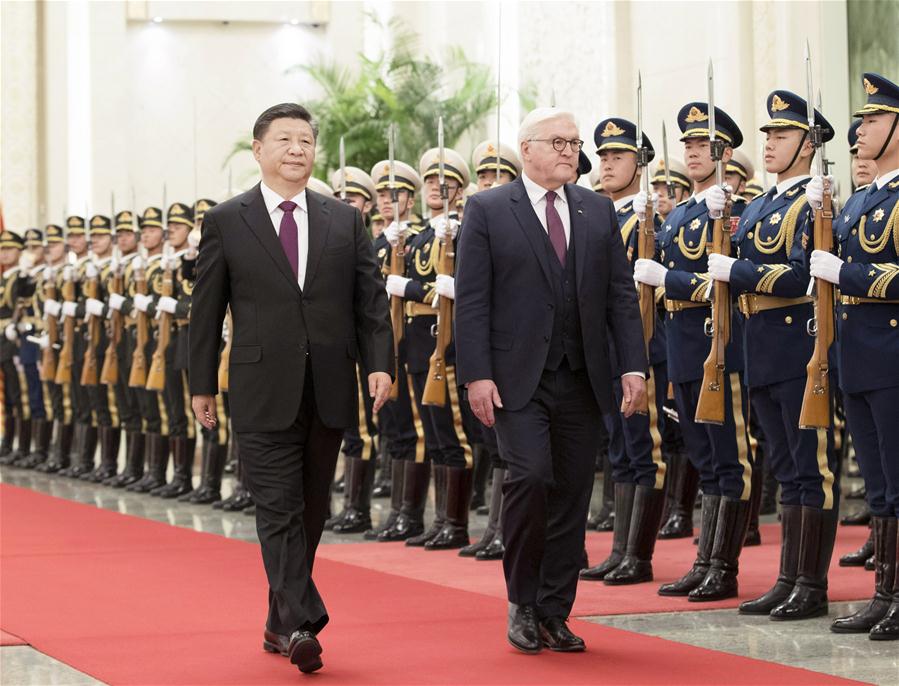 Chinese President Xi Jinping (L, front) holds a welcoming ceremony for German President Frank-Walter Steinmeier before their talks at the Great Hall of the People in Beijing, capital of China, Dec. 10, 2018. (Xinhua/Wang Ye)

Noting that the world is undergoing complicated and profound changes, Xi said China and Germany share the same or similar views on many issues.

The two nations need to continue enhancing bilateral and multilateral cooperation to benefit both peoples as well as bring more stability to the world, said Xi.

He made several proposals for future China-Germany cooperation.

Mutual understanding and trust are the basis of deepening bilateral ties, said Xi.

It is the mainstream view of both governments and all circles in both countries to have win-win cooperation, he said.

Xi called on both nations to summarize the successful experiences of bilateral cooperation and continue to surpass ideological differences and respect each other's development paths.

The two nations need to stick to openness and innovative cooperation to maintain the vitality of bilateral ties, said Xi.

This year marks the 40th anniversary of China's reform and opening up policy.

German enterprises have grasped the opportunities of China's new round of reform and opening-up, said Xi.

China is willing to continue to share its dividend of development and at the same time hopes Germany will remain open to Chinese investment, said the president.

On expanding cooperation, Xi said the Belt and Road construction could provide a major platform.

China would like to discuss trilateral cooperation with Europe and Germany and promote the synergy of the Belt and Road Initiative with the EU-proposed connectivity plan, said Xi, adding that China will further cooperate on the China Railway Express with Germany and countries along the route.

He also encouraged both sides to promote people-to-people exchanges and provide more platforms for exchanges in areas including culture, education, youth, and sports.

Xi called on both nations to forge ahead with global governance, jointly build an open world economy, uphold the multilateral free trade system, implement the Paris Agreement on climate change, promote the robust, sustainable, balanced and inclusive growth of the world economy and jointly safeguard multilateralism with the United Nations as the core.

He suggests China and Europe coordinate and support each other to safeguard the international order and promote global governance, adding that he hopes Germany can continue to play an active role to this end.

Steinmeier, who is on his first state visit to China as president, said that his visit to various parts of China has made him admire more the achievements China has made in the past four decades of reform and opening-up, especially the success of getting several hundreds of millions of people out of poverty.

The economic and social development of the areas in the southwestern Chinese province of Sichuan which were hit by an 8.0-magnitude earthquake 10 years ago was very impressive, said Steinmeier.

He said Germany is satisfied with the development of Germany-China relations and willing to enhance dialogue and mutual understanding, expand consensus, narrow differences, intensify coordination in international affairs and uphold free trade.

Germany opposes protectionism in any form, said Steinmeier, adding that the country will continue to promote cooperation between Europe and China and boost connectivity between Eurasia and China.

Before the talks, Xi held a welcoming ceremony for Steinmeier.

Steinmeier's state visit to China lasts from Dec. 5 to 10. Prior to Beijing, he went to the southern city of Guangzhou and southwestern city of Chengdu. 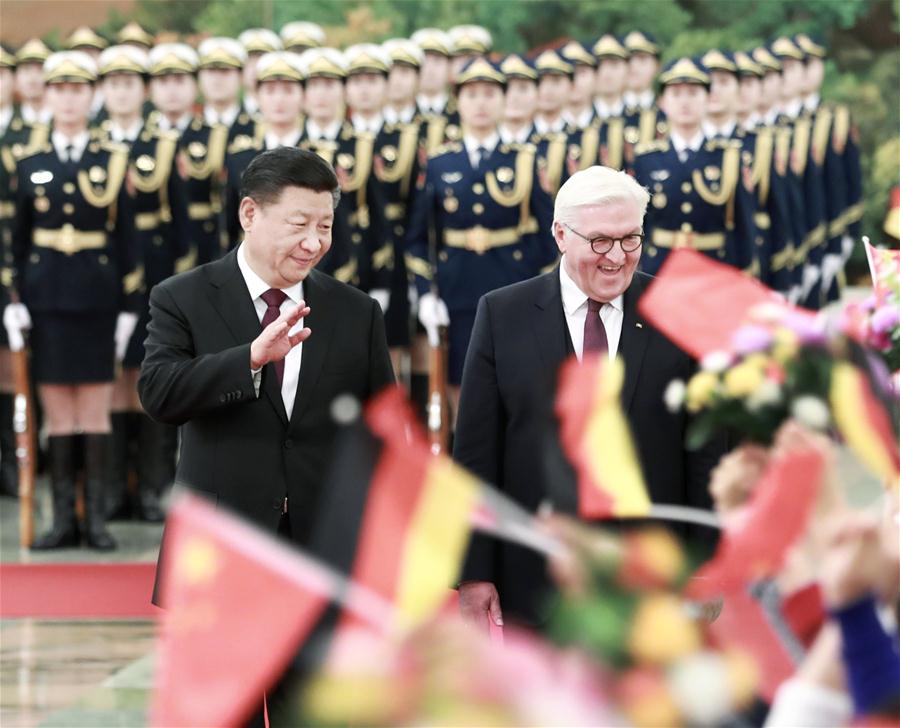 Chinese President Xi Jinping (L, front) holds a welcoming ceremony for German President Frank-Walter Steinmeier before their talks at the Great Hall of the People in Beijing, capital of China, Dec. 10, 2018. (Xinhua/Pang Xinglei)