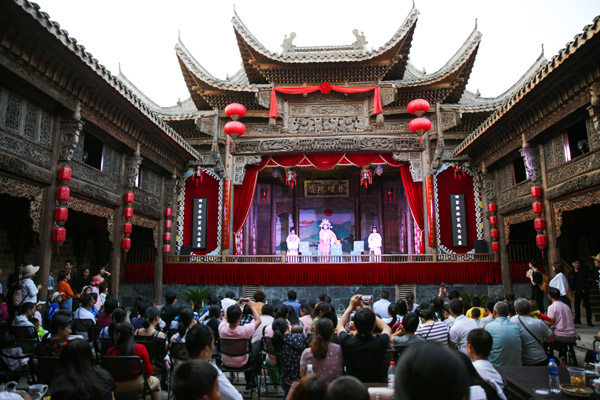 Locals and visitors from around the country enjoy a Huagu Opera performance at a theater in the old town of Tongguanyao in Changsha, Hunan province. [PHOTO/ZENG YONG FOR CHINA DAILY]

Deng Xia, a fan of Huagu ("flowery drum") Opera, a local art form of Yueyang in Central China's Hunan province, barely misses such shows at the One Yuan Theater.

"It has enriched the cultural life of residents like me," Deng, 35, says.

"In the past, we could appreciate the Huagu Opera, mostly during important festivals such as Lunar New Year, but now we can watch it often."

The One Yuan Theater, located in Rongjiawan town of Yueyang, has staged 30 to 50 Huagu Opera shows annually since 2012, with the audience numbers for each show sometimes touching 1,000.

"Some people bring along stools or are even willing to stand through a show of two or three hours," says Deng of the theater that has a seating capacity of 800.

To enjoy a show, each viewer has to pay only 1 yuan ($0.15) as admission fee to the theater, as the programs are covered by government funding. The initiative to provide regular and nearly-free shows to local residents has been successful in bringing the once-dead cultural heritage back to life.

Yueyang Huagu Opera originated more than 200 years ago. It is mainly popular in a dozen counties and cities in not just Hunan, but also in the adjacent Hubei province and the eastern Jiangxi province.

In its long development process, the opera has widely absorbed features of Yueyang folk tunes and artistic factors of other opera types to form its own style. Traditionally, Huagu Opera had no full-time performing troupes, and was only performed by amateur artists, most of whom were local farmers, during slack farming seasons on temporary stages.

In 2007, Yueyang Huagu Opera was recognized by the State Council, China's Cabinet, as a national intangible cultural heritage for its cultural, historical and artistic significance.

In recent years, measures have been taken by the local government to promote the art form.

The One Yuan Theater, which aims to cultivate more audience, has been a successful attempt, says Yi Wen, an expert of Huagu Opera, who works at a local cultural center in Yueyang.

"Traditional culture still means a lot to the local people. Even some younger residents have shown their interest in the opera," Yi says.

The shows at the One Yuan Theater are performed by a troupe that's affiliated to the cultural center where Yi works. Currently, there are about 30 members in the opera troupe, with ages ranging from 20 to over 60. The average age of the per-formers is 40, according to Yi. Being listed as a national intangible cultural heritage has drawn more efforts toward protecting the art form.

"Most of the young performers were recruited after the opera was listed as national intangible cultural heritage," Yi adds.

The local government's support in recent years includes adding to the troupe members' livelihoods and taking on costs for regular shows at the One Yuan Theater into its annual budget plan, Yi says.

Liu Liurong, 50, a leading member of the troupe, says she has witnessed the enhancement of the opera over the past years. Having performed such shows for more than 30 years, Liu is recognized as a provincial-level inheritor of the art since 2009. She says she had dreamed of standing on stage since she was in middle school.