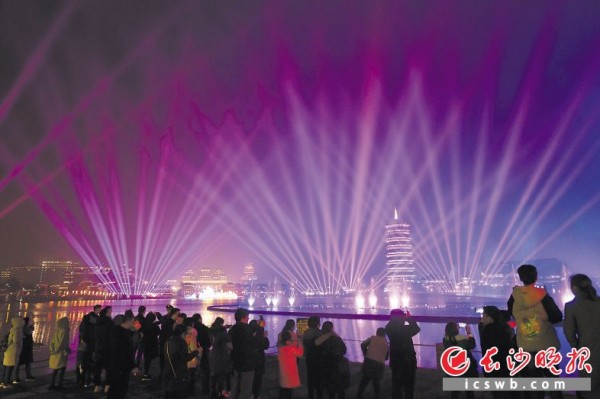 During the Spring Festival holiday, wonderful activities like this lantern show are staged in Tongguan Kiln Ancient Town, attracting many locals and tourists.

There was much buzz on the internet about Changsha by the end of Spring Festival. The city has integrated its culture with its tourism to stage a variety of colorful Spring Festival holiday activities.

According to the Changsha Municipal Bureau of Culture, Tourism, Radio and Television, during the holiday, the city welcomed 4,089,200 tourists, up 10.06% over last year; and, tourism revenue reached 3.84 billion yuan, up 10.41 %.

During the holiday, a number of activities were held at Changsha’s major scenic spots to further promote the integration of culture and tourism.

In addition, visiting museums and watching movies became a new fashion. Between February 4 to 10, Changsha cinema total box office was 49.78 million yuan, with 1.18 million in attendance.

During the holiday, major scenic spots in Changsha, like Yuelu Mountain and Orange Isle, received 330,000 visitors. Crowded as it was in Changsha’s major stations, docks, and scenic spots, the tourists were well-behaved. Uncivilized behavior, like spitting, doodling, littering, talking loudly, and queue-jumping, was significantly reduced. People are getting into the habit of not wasting food in restaurants.

“After so many years of publicity and instruction, civilized travel is gradually becoming a social trend,” said Chen, who has been a volunteer on the Orange Isle for many years.