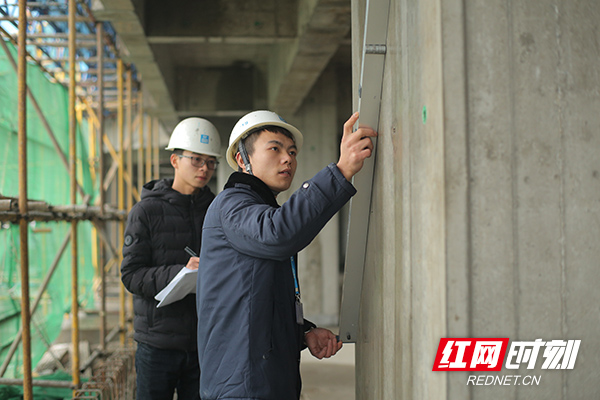 NPC deputy Zou Bin (right), who is also a quality inspector at the China State Construction Engineering, checks the quality of a construction project. [Photo provided to China Daily]

A young deputy to the 13th National People's Congress, 24-year-old Zou Bin, comes from a humble background and made his name as a highly skilled construction worker.

Zou was elected as a deputy to the NPC, China's top legislative body, last year.

Born in a village in Loudi, Hunan province, he worked as a construction worker for years and participated in various national and international craftsman competitions.

Zou said he believes he was elected an NPC deputy because he is able to represent the voices at the grassroots level, and the country has been paying more attention to the welfare of migrant workers, especially those with advanced skills.

Zou wants to do two things as an NPC deputy: help solve the wage arrears problem for migrant workers; and encourage young people with lower levels of education to pick up technical skills so that they can contribute to society.

"I began to work as a construction worker in Changsha with my father and uncle when I was 16, as many people in my village chose this profession," he said.

Young construction workers usually have to work as apprentices for three years before they can learn the necessary skills. However, Zou managed to become a professional within half a year due to his hard work.

In April 2014, he participated in a national construction competition and won the top prize. A year later, he represented China in the 43rd WorldSkills Competition in Sao Paulo, Brazil.

"The competition really broadened my horizons and made me realize that there are many things to learn, such as how to use the latest technologies and tools in construction," Zou said.

Since being elected an NPC deputy, Zou has started to feel the responsibility of helping other migrant workers solve their problems.

"Many migrant workers have come to tell me their difficulties, like wage arrears, children's education and housing," he said. "I do my best to help them solve their problems."

Zou also wants to use the skills he gained in construction competitions to guide others, so he has set up workshops to teach the skills to others.

"Being an NPC deputy has helped me broaden my ways of thinking while providing better clarity regarding my construction work and ways to further improve my skills," he said. "To work toward a prosperous society, we need to work hard for ourselves and not just wait around for the government's help. If I can be successful, other people can make it too."