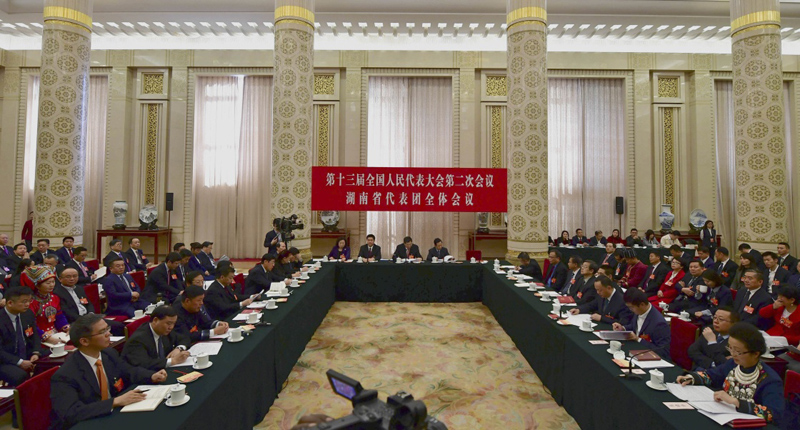 Deputies to the National People's Congress from Hunan take part in a panel discussion on March 7, 2019. [Photo/Xinhua]

According to a report released by the Academy of Greater Bay Area Studies in December, the business environment of Changsha, the capital city of Hunan, ranked at ninth place among China’s 35 major cities last year, climbing 11 spots since 2017.

The improvement of Changsha’s business environment is a reflection of Hunan’s overall improvement, said Xu at a panel discussion with the Hunan delegation, on the sidelines of the ongoing annual session of the National People's Congress.

Xu said cities in Hunan, including Changsha, have the advantages of lower land and home prices, which is very helpful for attracting investment.

At the same time, Hunan provincial government also aims to build up a fair environment for all kinds of market entities, facilitate investment and cut administrative approvals, and delegate powers to improve the business environment, he said.

To facilitate the enterprises, the local government reduced the certificates needed for enterprises, lowered taxes and fees, and also fulfilled the tax cut policies released by the central government, Xu said.

Measures such as shortening customs clearing time, reducing the time for starting a business and cutting the approval time for construction projects also have been used to improve the environment, he said.

Hunan provincial government is also committed to building clear and friendly relations between the local government and enterprises to increase the investment confidence of enterprises, and continuously improve the quality of public services and increase government efficiency.

“The Hunan government will do well what they should do, and accomplish what they promised,” Xu added.