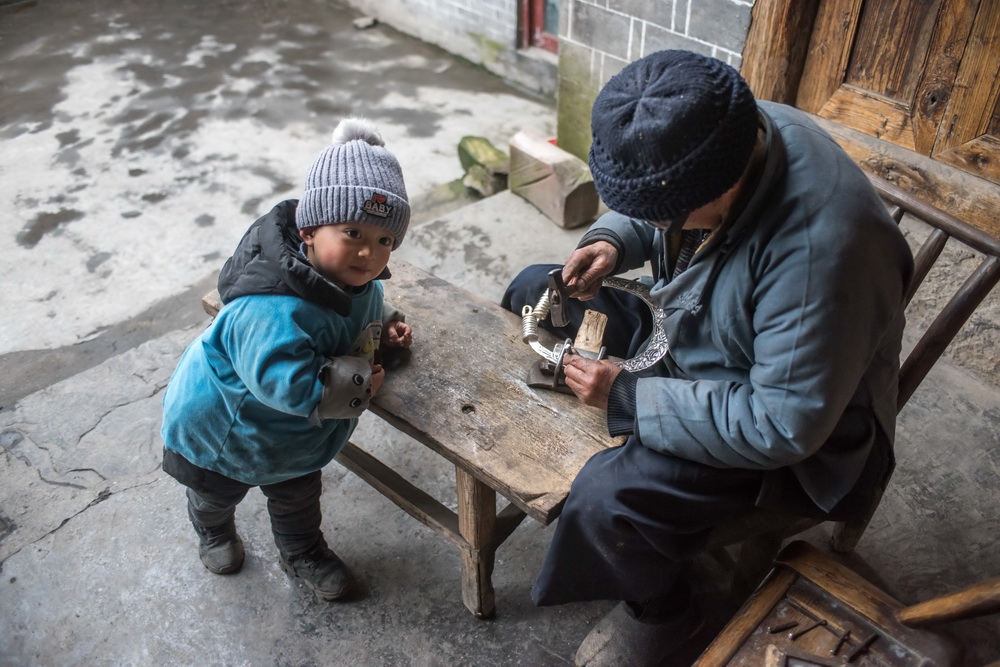 CHANGSHA - Bending over a tiny wooden table, Long Jitang rolls his graver with one hand on a silver collar and hammers with the other. In a few minutes, a delicate bird image appears.

Born into a silversmith's family, Long, 80, learned how to carve silver decorations during his childhood in Debang village in Central China's Hunan province.

The village is in Fenghuang county, part of Xiangxi, an autonomous prefecture for Miao and Tujia ethnic groups.

Miao women have a tradition of wearing silver accessories. When they get married, a set of silver decorations is an indispensable dowry.

According to Long, to make a silver accessory, one has to complete dozens of procedures, including designing, smelting, carving, hammering, inlaying and polishing.

"A whole set of silverware, covering the head, the face, the chest, shoulders, ears and hands, takes seven to eight silversmiths at least one week," Long said.

Making silver accessories was listed among intangible cultural heritage in 2006. 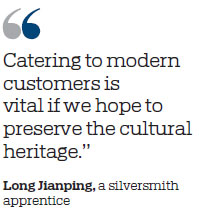 Long's family has passed on silver carving skills from generation to generation.

When Long was young, he followed his father to several provinces in western China to work as a silversmith. They carried a shoulder pole and offered door-to-door services.

The traveling experience enabled him to learn regional craftsmanship skills, which enhanced his work.

Because of his outstanding carving skills, Long had many apprentices after he returned to the village.

"My grandfather is a carving master and can instantly carve whatever he wants with no need for pre-drawn lines," said Long Jianping, his grandson who is among his apprentices.

Apart from manually carving traditional accessories like his grandfather and father, the younger Long, 23, uses molds and machines to produce teapots, bowls and chopsticks.

"People are getting richer and richer with a rising taste for beauty, and their expanding spending capacity has inspired us to be creative," he said.

The young man said products from factories with more diverse designs and at lower prices have challenged the craft, forcing many silversmiths to find other jobs in cities.

"Therefore, catering to modern customers is vital if we hope to preserve the cultural heritage," he said, adding that he receives orders mainly from wholesalers.

Supported by the local government, Debang village has developed into an integrated center for silver accessory exhibitions, production and manual workshops.

Developing the industry has also brought other benefits. The village has concrete roads that allow farming machines to reach farmland and every household has access to running water.

The village is now considering developing its tourism industry. They hope to entice tourists with their countryside and silver carving culture, according to village cadres.

Currently, there are some 200 silversmiths and more than 10 silver workshops, and the skills have become a weapon to fight poverty.

All the villagers are expected to be lifted out of poverty in 2019.

Wu Jinnan, a farmer, has been learning how to carve silver accessories for more than two years.

"Under the guidance of the elderly craftsmen, I'm a quick learner," Wu said. "I hope I will become a skilled silversmith in the future."

Long Jianping said he was not planning to force his child to become a silversmith, but would teach him anyway. "We must pass our heritage on to the next generation."