Solid progress has been made in the implementation of structural reforms for the industry in Hunan Province in recent years, with traditional sectors becoming more efficient and the strengthening of drivers of new growth.

President Xi Jinping called for advances to supply-side structural reform in a bid to improve the people's well-being and to accelerate the modernization of agriculture during a discussion with representatives from the province during the National People's Congress (NPC) and Chinese People's Political Consultative Conference (CPPCC) in Beijing in 2016. At the meeting, provincial officials committed themselves to speed up the pace of reform.

At the end of March 2016, the provincial government issued guidelines for promoting supply-side structural reform. In August of that year, it introduced a four-year plan to support industrial transformation and upgrading. As of the end of 2018, production overcapacity of 4.65 million tons of iron and steel, as well as 25.42 million tons of coal, were eliminated, and more than 3,000 large-scale industrial enterprises, one-fifth of the total in the province, were closed. And two months ago, 261 smelters and chemical enterprises were shut down at the Zhuzhou Qingshuitang Industrial Base on the Xiangjiang River in Changsha City. 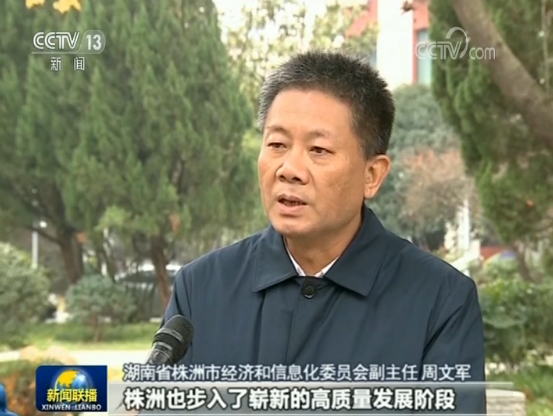 Zhou Wenjun, the deputy director of the Zhuzhou Economic and Informatization Technology Commission, is interview by CCTV. [Screenshot: China Plus]

"A major source of pollution in the Yangtze River Basin has been completely removed. Meanwhile, Zhuzhou has entered a new stage of high-quality development. In the near future, the Zhuzhou Qingshuitang Industrial Base is set to become a new industrial city that integrates cultural tourism, scientific innovation, and modern logistics," said Zhou Wenjun, the deputy director of the Zhuzhou Economic and Informatization Technology Commission.

But while old polluting factories are being shuttered, other businesses are booming. Engineering machinery has traditionally been a dominant industry in Hunan. Despite a slump in overall demand over the past couple of years, Zoomlion Heavy Industry Science &Technology Company is going strong. It recently sent its first batch of truck cranes built using a new modular production method to customers all around the country from its base in Changsha.

Liu Yuxin, the technical leader of the Zoomlion Heavy Industry Science &Technology Company, is interviewed by CCTV. [Screenshot: China Plus]

"A total of 467 patents have been newly granted, which brings about the mass production of goods and reduces the cost for users," said Liu Yuxin, the technical director of the Zoomlion Heavy Industry Science &Technology Company.

Another major area of focus for the provincial government is poverty alleviation. The region's hilly terrain poses a major headache when it comes to delivering relief projects in the province's many hard-to-reach areas.

Wang Zhiqun, the director of the Hunan poverty alleviation and development office. [Screenshot: China Plus]

"At this point, 19 poor counties have not been pulled out of poverty. Following President Xi's call, we have always regarded poverty alleviation as our greatest political task and top priority. We are defining the responsibilities of each department in a bid to identify problems, finding gaps, and making up for shortcomings," said Wang Zhiqun, the director of the Hunan poverty alleviation and development office.

A large trade fair kicks off every major holiday in the resettlement area in Hengshi Town in Ningxiang City, at which poor households can sell their agricultural products. This year, the government is also focusing on helping people from extremely poor areas by expanding the coverage of poverty alleviation programs and offering additional education and healthcare services.

They are also forging ahead work to provide new safer living conditions for local residents. So far, 178,000 unsafe houses in rural areas and 281,000 shanty towns have been renovated. This year, 1.2 million more rural households will have access to tap water. And the electricity distribution network will be expanded to cover all of the region's administrative villages.