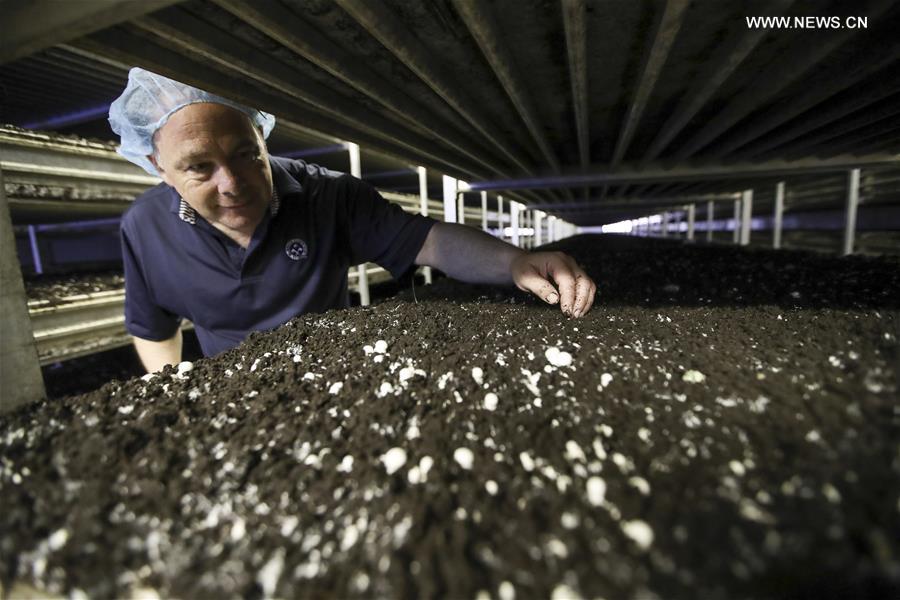 Chris Alonzo, President of Pietro Industries, checks the growth of mushrooms at his farm in Kennett Square of Chester County in Pennsylvania, the United States, July 9, 2018. (Xinhua/Wang Ying)

NEW YORK/WASHINGTON, March 19 (Xinhua) -- Chris Alonzo, a third-generation mushroom farmer from the county of Chester, in the U.S. state of Pennsylvania, will soon enjoy a strong foothold in China's much-coveted, growing mushroom market.

The mushroom grower could hardly gain entry into the Chinese market if Chester County had not established a sister city relationship with Funan County, in the northwest of Anhui, which is near the megacity Shanghai.

"That is a project that's probably the furthest along in terms of our relationship with sister cities," Chester County Commissioner Terence Farrell told Xinhua in a recent interview.

The county, with an area of 1,965 sq km and about 516,000 people, has long taken pride in its diverse agricultural products. Farmers there produce a whopping half of all the mushrooms in the United States.

Building relationships in a foreign market as big as China "takes a little bit more (time)," and "people have to get to know each other (first)," Farrell said. "So the sister city relationships provide a foundation for what you can continue to fill."

STRONG ENTHUSIASM ON BOTH SIDES

Sister city ties between China and the United States began shortly after the two countries established diplomatic relations in 1979.

Forty years on, bilateral sister city relationships are flourishing, as now the two countries have 277 pairs of sister relationships at different levels, and the momentum is still going strong, said Roger-Mark De Souza, president of Sister City International (SCI), a non-profit organization that promotes local-level ties between the United States and other countries.

"There's a real hunger to engage and partner" between China and the United States at local levels, De Souza told Xinhua at a celebration held by the Chinese Embassy in Washington D.C. on March 13, marking the 40th anniversary of sister city relationships between Chinese and U.S. cities.

The sister city program was created by former U.S. President Dwight Eisenhower in 1956 and was centered on the idea of promoting citizen diplomacy between countries as a supplement to government diplomacy. The SCI for its part was formed to serve as a platform to boost the program.

In the decades that ensued, the idea translated into a "fruitful and sustained" relationship at the grassroots level between China and the United States, said De Souza.

"There are a lot of opportunities because China is so large. It's such a large population. A lot is happening," said De Souza, noting there's equal enthusiasm on both sides.

"They have given birth to a number of innovations, exchange programs, and unique opportunities," De Souza said, as the relationships have expanded far beyond sister province/state and cities to sister counties, ports, and schools.

A TALE OF TWO CITIES

The sister relationship is often forged between entities sharing similar geographical features or trade opportunities and is fueled by common local interests.

A case in point is the sisterhood between the Chinese coastal city of Tianjin and the U.S. eastern city of Philadelphia. The two port cities became "sisters" almost 40 years ago.

"We are one of the first (of those relationships). We honor it. We want to do it well," said Samuel K. Chueh, director of international business at the Philadelphia Department of Commerce, noting that his city is fully devoted to its Chinese "sister" Tianjin.

"Tianjin to Beijing is like Philadelphia to New York," Chueh said, adding that both cities enjoy an abundance of cultural diversity.

Philadelphia has the largest temperature-controlled port along the East Coast of the United States, he said, "so we do have our advantage and the sister city relationship can help us better understand our friends in China and see how we can find more connectivity."

Chueh said he hoped that Philadelphia and Tianjin will set up a direct shipping route in the future, adding that Philadelphia also plays a leading role in life science, with the presence of about 80 percent of the world's pharmaceutical companies.

Next to Johnson &Johnson and GlaxoSmithKline (GSK), many Chinese pharmaceutical companies also have offices in Philadelphia, he said.

According to the Brookings Institution, from 2010 to 2016, foreign direct investment in Philadelphia's biotech industry from China was five times higher than that of Boston, which is home to Harvard and Massachusetts Institute of Technology (MIT).

In June, Tianjin is sending delegations to attend the BIO International Convention in Philadelphia, which excels in life science and looks forward to more collaboration with Tianjin.

"We are working very ly with China and see how we can support the life science development in China," Chueh said.

In 1998, a Sister City Scholarship was established to allow Tianjin high school graduates to study at Drexel University. Over the years, it has expanded to also include La Salle University, Moore College of Art and Design, and Temple University.

Yang Mu, the first recipient of the scholarship, pursued a degree in computer science and graduated second in her class. She later went to Temple Law School and is now an intellectual property lawyer at a local firm.

In addition, the sister city exchanges include a year-long "internship" with Philadelphia's finance department by a vice mayor from Tianjin, according to CDI, which runs the sister city program.

The cultural exchanges between the two cities are also expanding. In May, the Philadelphia Orchestra, the first U.S. orchestra to perform in China in 1973, is returning to China for the 11th time to play for audiences in multiple cities, including Tianjin.

LEGACY FOR GENERATIONS TO COME

"The sister cities relationship is a major channel for people-to-people exchanges and sub-national cooperation. It is an important driving force for our relations," said Minister Xu Xueyuan of the Chinese embassy at the celebration.

"Following the principles of friendship, mutual benefit, and practical results, the two sides have made great achievements in their trade and economic cooperation as well as people-to-people ties, with the purpose of common development and shared prosperity," Xu said.

Some Chinese high school students who come to the United States for an exchange program may later apply to a university in the same city, while a visit by a Chinese student may spark an interest to learn Chinese in a host family, he said.

"Sister city relationships touch the hearts and the passions of U.S. and Chinese citizens, because of that these relationships have endured over time," De Souza said.

"I think building these sister city relationships, the people-to-people relationships will actually spur our two countries to work out whatever difficulties we are going through right now," Farrell said. "Because people see the opportunities, the results, or the fruits from all of the bilateral trade."

"We do trade and investment, community development, youth and leadership and arts and culture, those areas will continue. Things like disaster mitigation, sustainability, resilience, economic development, cybersecurity are all areas that we want to continue to build on," De Souza said.

As sister city relationships between China and the United States continue to prosper, De Souza said he hopes they will become a legacy for the generations to come.

"I hope my great-great-grandchildren would be able to see that the U.S.-China sister city relationships have sustained over time and continued to allow us to better understand each other, to collaborate and engage and to build trust," he said. 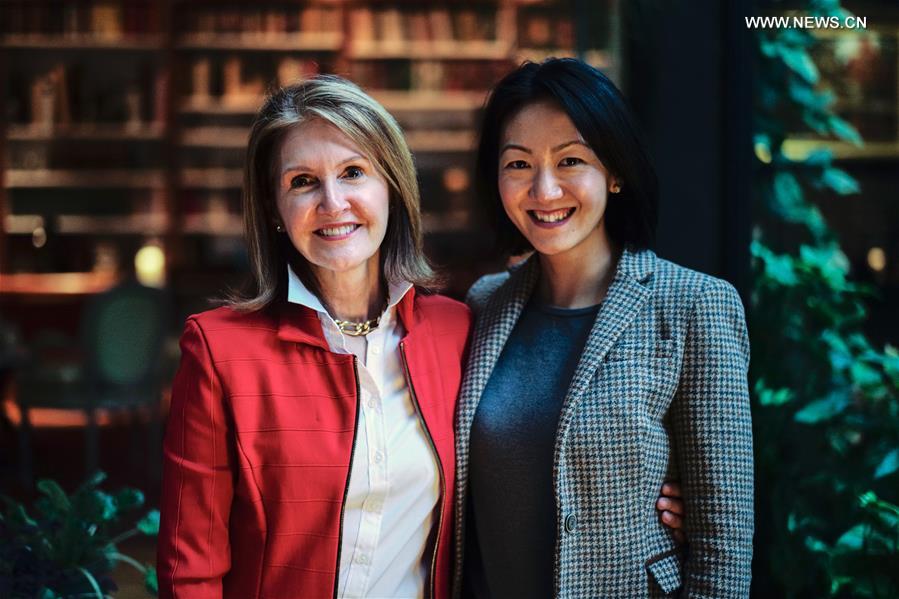 Yang Mu (R), the first recipient of the Sister City Scholarship, which allows Tianjin high school graduates to study at Drexel University, poses for a photo with Nancy Gilboy, former head of the Citizen Diplomacy International (CDI), during an interview with Xinhua in Philadelphia, the United States, March 13, 2019. (Xinhua/Li Muzi) 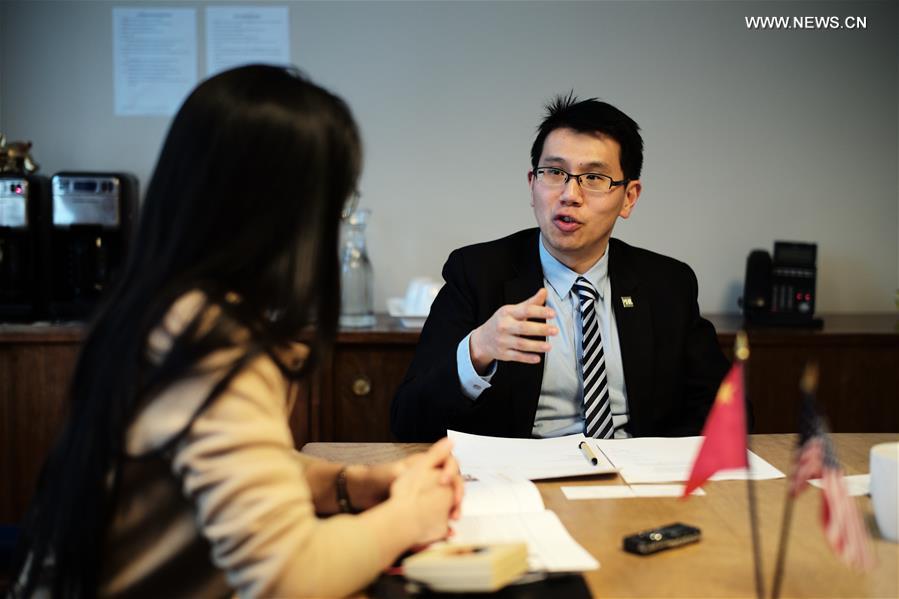 Samuel K. Chueh (R), director of International Business at the Philadelphia Department of Commerce, speaks to Xinhua during an interview in Philadelphia, the United States, March 13, 2019. (Xinhua/Li Muzi)