Local government authorities in the historic English university city of Cambridge are considering installing a "trackless metro" transit system that is similar to those developed in China.

The innovation would be part of a proposed 4-billion-pound ($5.3 billion) upgrade of the area's transportation network.

A feasibility report published on Tuesday said there was a "compelling case" for such improvements, which could include a fleet of "zero-emission trackless metro vehicles". 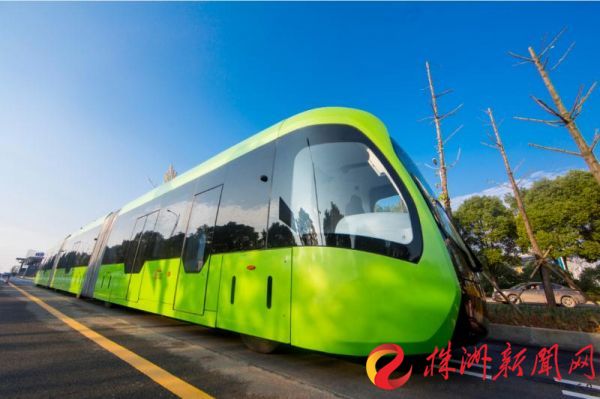 The Cambridgeshire and Peterborough Combined Authority, which commissioned the report, is yet to decide from where it should source the vehicles. However, the authority has included the transport system in the city of Zhuzhou, in China's Hunan province, among examples of systems it might want to emulate.

Zhuzhou has had a 3-kilometer trackless metro test line in operation since last year. The city's Autonomous Rail Rapid Transit, or ART, vehicles were developed by Chinese transport manufacturer CRRC in 2017.

The 30-meter-long vehicles have been described as a mix between a tram, a bus, and a train. They can be operated without a driver and use sensors to follow marks painted on the road, instead of metal tracks. They are battery-powered, which eliminates the need for overhead cables.

The vehicles do not require the installation of rail track, which is both costly and disruptive to urban areas. They have the speed, smooth riding, and capacity of light rail systems, and do not have the emissions and noise of buses.

James Palmer, mayor of Cambridgeshire and Peterborough, said the project would be "one of the most pioneering transport infrastructure projects seen in the UK".

"It will offer world-class public transport that will reduce reliance on the private car," said Palmer. "It will help to meet the ambitions we have to create jobs, deliver economic growth, and unlock new housing. The CAM will be the scheme around which we can tackle the transport infrastructure challenges which threaten our future economic prosperity."

As well as a trackless metro system, the CAM scheme would include 12 kilometers of tunneling under the city of Cambridge and two underground stations; one in the city center and one at Cambridge Station.

The CAM aims to bring the time it takes to travel across the city down to 12 minutes, and to halve several other key peak journey times.

Initially, drivers will be used to conduct the vehicles through the network, but the vehicles will transition to autonomous operation when it becomes viable in urban areas.

Construction could start as early as 2021, with the core metro infrastructure anticipated to be built between 2023 and 2029. The ultimate aim would be to accommodate 33 million passengers a year by 2051.

The local authority wants to raise an estimated 4 billion pounds to fund the project, partially from local housing developers and from the central government.

"To get government's contribution and support, it is critical that the next stage identifies the funding methods needed to secure close to 4 billion in capital and show the metro will have zero overall operating costs," said Lewis Herbert, leader of Cambridge City Council."The metro is a vital project that will boost national economic growth – like major London transport projects, we will need (the government's) help to give us the powers needed to generate funds ourselves or secure a significant grant for development."

The feasibility report estimates that 100,000 jobs and 60,000 new homes could result from the CAM, and says its economic benefits would outweigh costs by between two and four times.