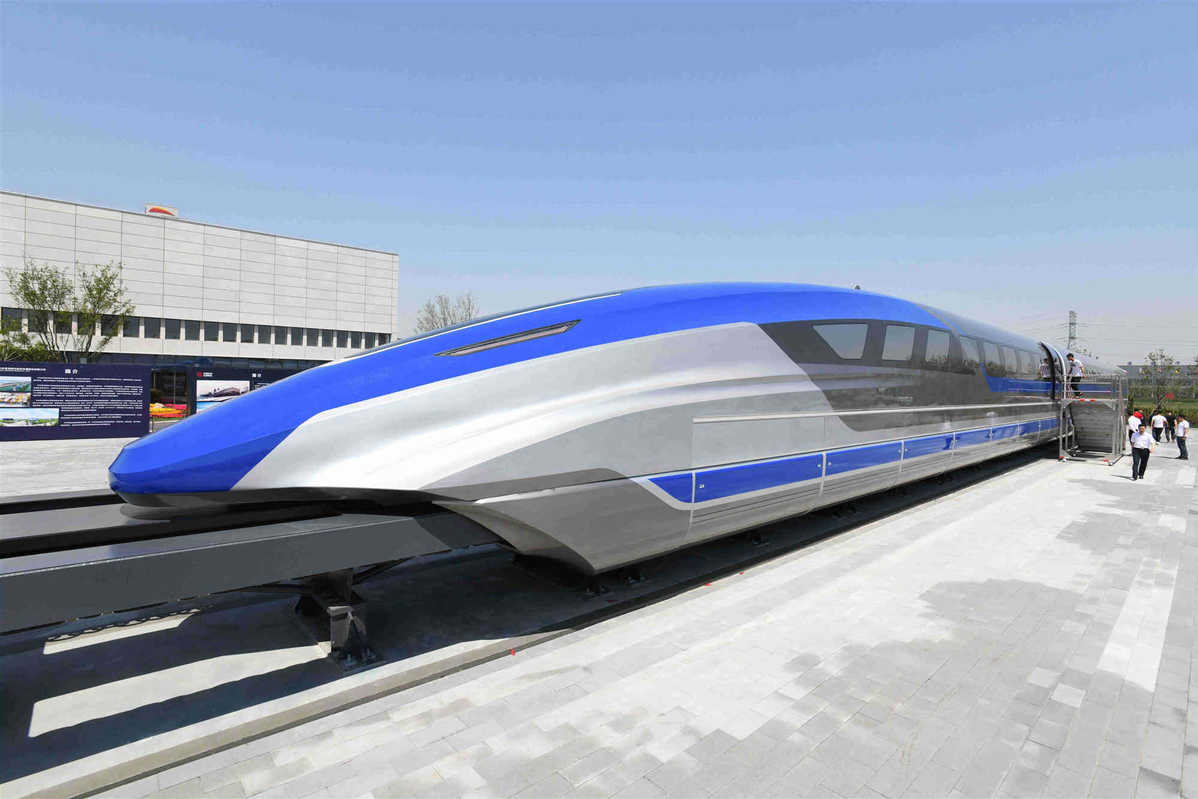 A prototype magnetic levitation train with a top speed of 600 km/h is unveiled in Qingdao, Shandong province, on Thursday. [Photo/Xinhua]

A Chinese manufacturer unveiled a prototype magnetic levitation train with a designed maximum speed of 600 kilometers per hour in Qingdao, Shandong province, on Thursday.

The train was designed and made by CRRC Qingdao Sifang Co in the eastern port city of Qingdao. The company is a wholly owned subsidiary of China Railway Rolling Stock Corp, the world's largest rolling stock manufacturer by annual production volume.

Experts said the debut of the prototype marks a major breakthrough by China in the high-speed maglev trains.

Ding Sansan, head of the train's research and development team and deputy chief engineer of CRRC Qingdao, said the prototype can help check and optimize key technologies and core system components of the high-speed maglev system and lay a technological basis for an engineering prototype.

"The prototype has already achieved static levitation and is in ideal condition," Ding said at a news conference in Qingdao.

"We are building an experimental center and a trial production center for high-speed maglev trains and expect to put them into operation in the second half of the year," Ding said, adding that research and development of a five-carriage engineering prototype is proceeding smoothly.

The engineering prototype, a key project in the Ministry of Science and Technology's 13th Five-Year Plan (2016-20) to promote an advanced railway system, is expected to roll off the production line next year and in 2021 to undergo comprehensive testing and be made ready for commercial manufacturing.

Feng Hao, a researcher at the National Development and Reform Commission's Institute of Comprehensive Transportation, said the prototype indicates China is a step closer to production capacity in high-speed maglev engineering. A prototype magnetic levitation train with a top speed of 600 km/h is unveiled in Qingdao, Shandong province, on Thursday. [Photo/Xinhua]

Chinese high-speed trains currently have a top operating speed of 350 km/h, while the cruising speed of commercial aircraft is about 900 km/h. A high-speed maglev running at 600 km/h could narrow the gap between high-speed rail and air travel, Feng said.

He added that Japan will remain a strong rival in bullet train development and high-speed maglev train technology and that over the past five years it has been eager to compete with China for train orders and railway-related projects in markets like India, Thailand, Malaysia, and Indonesia.

A Japanese maglev train reached 603 km/h on an experimental track in Yamanashi prefecture in 2015, and Japan plans to put its 500 km/h maglev trains into operation by 2027.