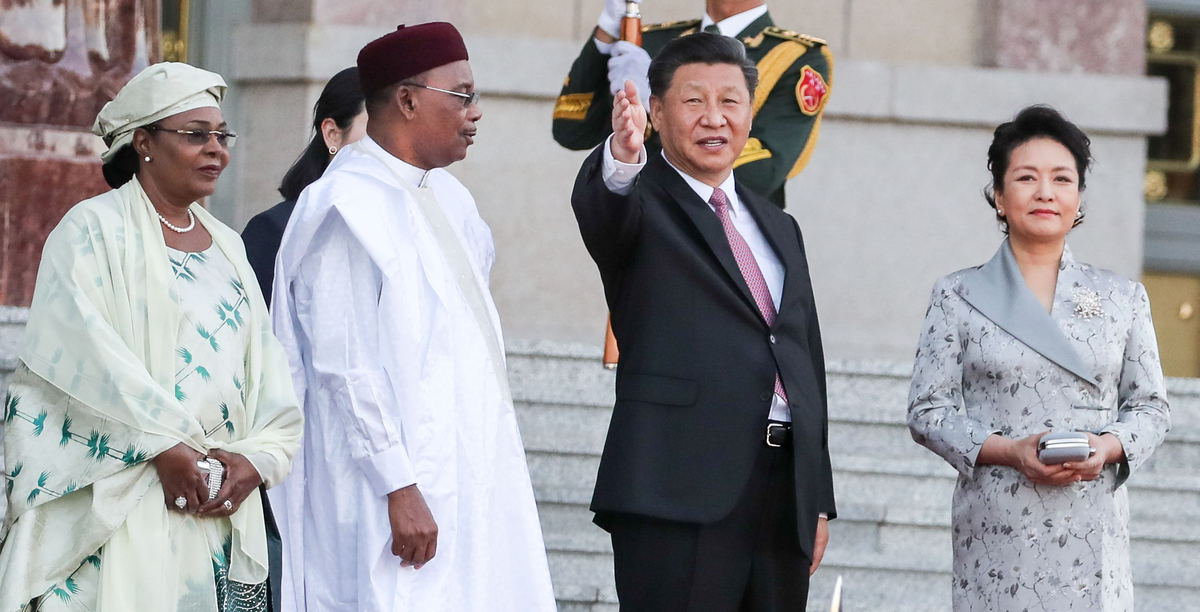 China and Niger should enhance Belt and Road cooperation and implement major projects in areas such as infrastructure, energy and agriculture, President Xi Jinping said on Tuesday. Xi made the remark while meeting with Niger's President Mahamadou Issoufou at the Great Hall of the People in Beijing. Issoufou is paying a state visit to China from Sunday to Thursday.

Witnessed by the two leaders, China and Niger signed a number of cooperation documents after their talks. Xi appreciated Issoufou's efforts in promoting the China-Niger and China-Africa friendship over the past few years. Noting that China and Niger are good friends, partners and brothers, Xi said that the two countries have enhanced mutual political trust and have achieved fruitful outcomes in practical cooperation in several areas.

China would like to work with Niger to jointly implement the outcomes of the Beijing Summit of the Forum on China-Africa Cooperation, strengthen strategic cooperation and bring more benefits to the people of both countries.

Issoufou attended the Beijing Summit of the FOCAC in September. The two countries should continue to understand, trust and support each other on issues related to core interests and major concerns, Xi said, adding that the two sides should share more experiences on governance and development. Xi called on the two nations to enhance connections under the frameworks of the Belt and Road Initiative and FOCAC.

China will continue to support Niger to fight terrorism and safeguard regional peace and stability, Xi said. China would like to help Niger improve its people's livelihood through such measures as medical assistance and via exchanges in areas including culture, youth, women and think tanks.

Mutual understanding between the people of both nations should also be promoted, Xi said. He stressed that as long as all countries stick to the development paths that suit their own national situations, make joint efforts to build the Belt and Road and remain dedicated to fulfilling the goal of building a community with a shared future for mankind, they will definitely achieve success.

Issoufou congratulated Xi on the 70th anniversary of the founding of the People's Republic of China and the great achievements that Chinese people have made under the leadership of the Communist Party of China. Noting that China's development has made important contributions to mankind, Issoufou said that China's inclusive economic growth has lifted a huge number of people out of poverty.

Niger supports the goal of building a community with a shared future for mankind, and the BRI put forward by Xi will bring benefits for the whole world, he said, adding that Niger would like to proactively participate in the Belt and Road. While meeting with Issoufou on Tuesday, Premier Li Keqiang said that China would like to offer a hand to Niger for the country's economic development and the improvement of people's lives.

Talks with Vanuatu PM China seeks no private interests and scope of influence in developing relations with Pacific island countries, and will be good friends and partners trusted by them forever, Xi said on Tuesday. Xi made the remarks while meeting with visiting Vanuatu Prime Minister Charlot Salwai in Beijing. The China-Vanuatu relationship has become a good example of relations between China and Pacific island countries, Xi said, adding political mutual trust between the two countries keeps deepening and exchanges and cooperation in various fields continue to expand.

Xi said the country appreciates Vanuatu resolutely adhering to the one-China policy, and supports it independently choosing the development path that suits its national conditions. Xi called for strengthening the alignment of the development strategy of the Pacific island country with the BRI and tapping potential for bilateral pragmatic cooperation.

Salwai highly commended China's achievements in its reform and opening-up drive, and said the country's success has not only brought changes to itself, but also has profound and positive influence on the world. Vanuatu firmly honors the one-China policy and supports the Chinese government in its efforts to realize peaceful national reunification, he added.