Rivers at the heart of China

Rivers, over time, have acted as inspirational forces for artists, writers, poets, musicians, travelers and more recently, of course, photographers. In a recent feature, on Shanxi, I reflected on the im-portance of the Yellow River down through China’s long history. I am writing this piece in Tianjin, a city to which I am attracted partly because of its river, the Haihe or “sea river”, for this historically represented the connection between the sea and the Grand Canal.

A river can act as a focal point that adds attraction to a city, just as the Huangpu does with Shanghai. As I look today at the Haihe, its calmness now only broken by a few pleasure boats compared to its earlier bustling maritime days, I think back to my earlier life in Scotland’s largest city, Glasgow and its river, the Clyde.

It is said that “Glasgow made the Clyde and the Clyde made Glasgow”. A former salmon river that was straightened and deepened. During the 19th and into the 20th century it became a major centre for shipbuilding, engineering and trade, transforming Glasgow into one of Britain’s major cities. As a boy, I was always fascinated with that river as boats would come from countries far and wide across the globe. International travel then was just a dream for many of us. However, although there were songs about the Clyde flowing from the hills to the sea I knew little of the complexity of rivers until I went on to study geography in two of my city’s leading universities. 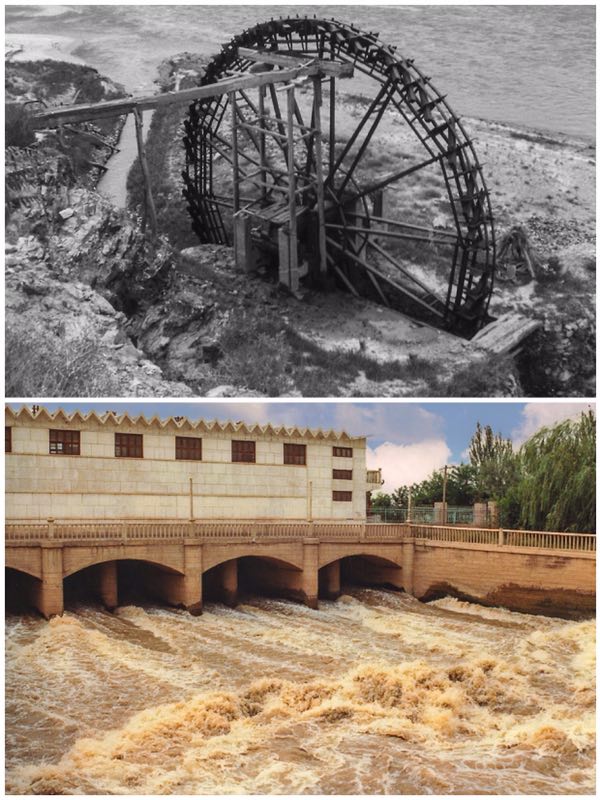 The Yellow River, flowing also from the high plateau of Qinghai, has had a very mixed history. Due to the large quantities of easily eroded loess it carries, many stretches are too shallow for navigation. Indeed where it flows out onto the Bohai Gulf in Shandong it builds up more and more land, a constantly extending delta. Over time, such continual deposition has consequently resulted in flooding and even changing course. Where I am writing this in Tianjin, historically this was where the Yellow River flowed toward the Gulf. Today the city rests on sedimentary deposits carried cen-turies ago from central China! Similarly Shanghai and islands such as Chongming along with sur-rounding areas are built up from the Yangtze’s river borne deposits.

In southern China, the Pearl River Delta has long been one of the world’s busiest waterways with Guangzhou at the apex while Hong Kong and Macao sit at its mouth. It is composed of a complex system of channels, some natural, others manmade. Many hills dot the area, some were once islands while the surrounding flat, increasingly urbanized, land is composed of silt brought down by wa-terways that extend right to the border with Vietnam. At Guangzhou the Pearl River (Zhujiang) is supplemented by the East (Dongjiang) while westwards, the North (Beijiang) and mighty West (Xinjiang) Rivers become part of an incredibly complex maze of major and smaller streams particu-larly across the western delta areas. All of these water channels remain today navigable highways busy with barge traffic but also larger container-carrying vessels moving to and from major Delta ports. This geographic area has long been one of China’s leading centers of mercantile activity. 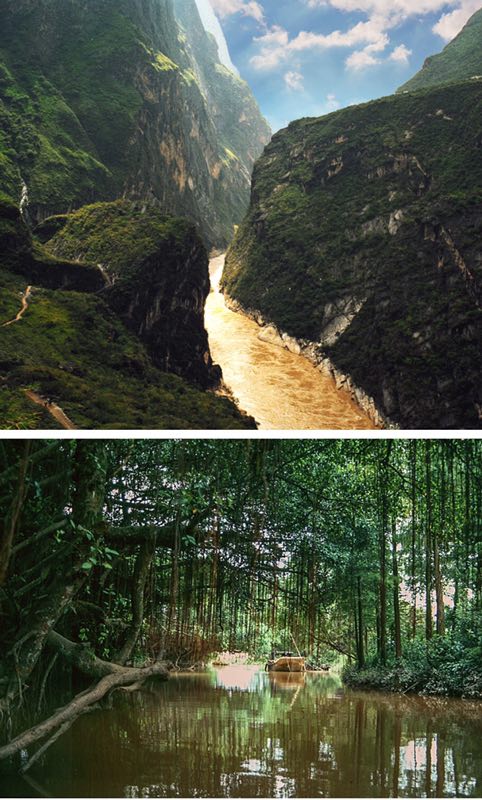 Rivers are part of a natural cycle where the sun’s energy causes evaporation from the sea that falls as precipitation due to condensation through higher altitude cooling. Rain falls over lower lands or as snow over higher peaks, some turning into ice. Without adequate sources of supply rivers can and do dry up for geological time is much greater than human existence with much changed during this planet’s geological history. A major debate now is whether climate change is affecting the high altitude reserves of ice and snow on which rivers depend.

It was while living in Guangzhou in the early 1990s I increasingly became aware of how vital rivers have been over China’s history. I watched with fascination the constant activity both on the waters and along the banks where boats were berthing. In 1992 I travelled by steam-hauled train to Zhaoqing where a massive bridge spans the West River. There again so many boats operated with a constant traffic bringing small vessels carrying people and agricultural produce across river to the markets of Zhaoqing. 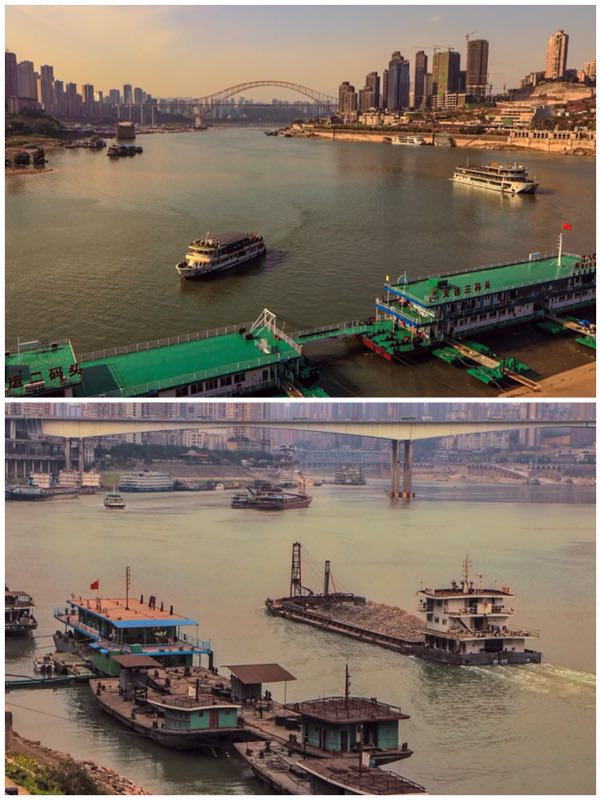 Increasingly determined to undertake a river journey myself, I headed up the West River from Guangzhou to Wuzhou in Guangxi. That journey lasted almost 24 hours in spring 1993. Much of the voyage I simply stood on deck surveying the scene, of bustling activity around Foshan where passengers were transferred to our lager passenger vessel by smaller wooden boats. Even as night fell, I still stayed on deck watching the towns we passed through. By sunrise the panorama was of misty mountain peaks rising above river banks where farmers walked their buffaloes to the water edges. People fished from simple wooden sampans while large rafts of bamboo logs were floated downriver past barges carrying shipping containers from the larger Delta ports. There was so much activity, this being before today’s expressways and high-speed rail. Indeed where I was travelling there were then no railways, the river was the main highway for people and goods. Later I would sail on the Li River between Guilin and Yangshuo, a tributary of the West River that was historical-ly linked to the Yangtze by canal. A few years later, I headed to Nanning, capital of Guangxi, close to the border with Vietnam. Even there boats then still connected with Guangzhou.

By far, my greatest river journey, in 1994, followed the “Long River” from Leshan where the Dadu He and Minjiang join below the massive sitting Buddha carving. It would be six days total sailing down to Wuhan. The river then was a vital corridor of life through central China where people’s lives centered on its waters and the commerce generated. The arrival of the boats, at the many river towns, would generate considerable activity around the quays and landing stages we berthed at. So much transferred on and off by porters using bamboo shoulder poles. I was impressed by the skills of the boatmen who safely navigated often wildly turbulent channels through the narrows of the Three Gorges. River boat journeys I discovered were also a way of appreciating nature, of bird life particularly among the lower lake wetland areas. It gave me the opportunity to view early construc-tion work on the Three Gorges Dam before my boat was lowered down through the locks of the earlier (1988) Gezhouba Dam. 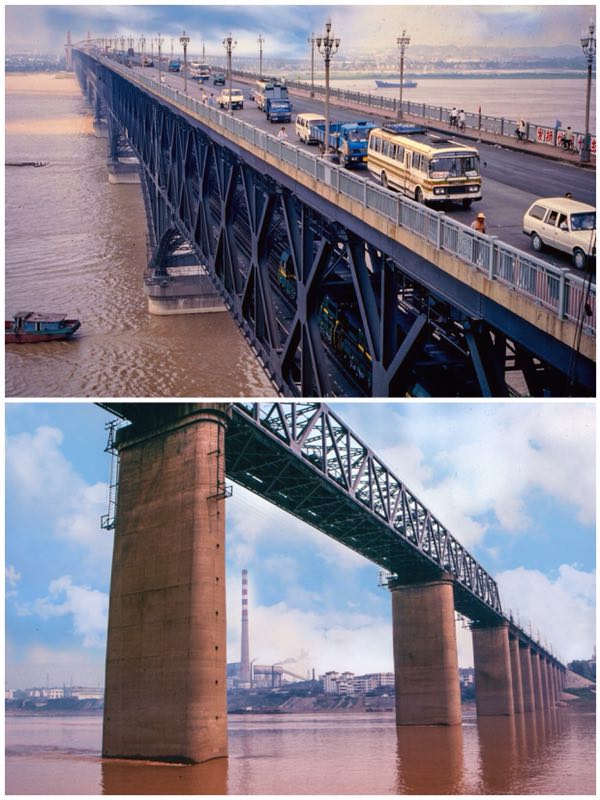 Beyond Nanjing, the Jiangnan or Lower Yangtze area is also fascinating how an incredible network of canals connect lakes such as the Taihu with the main river and to Shanghai via Suzhou Creek. This is an area where I could spend days just simply watching life on the waterways. A few weeks ago this year, 2019, around Tongxiang in Zhejiang, I was delighted to discover so much river life continuing to this day! However, sailing on the large passenger vessels is now mostly a thing of the past for expressways, bridges and high-speed rail have transformed journeys connecting inland towns to the coast from four days or more to a few hours!

Rivers now are home to many luxury tourist vessels where busy long-river passenger ferries once plied. However, considerable cargo is still carried along, for example between Shanghai and Chongqing, as water remains the most economical way for transferring bulk cargo. 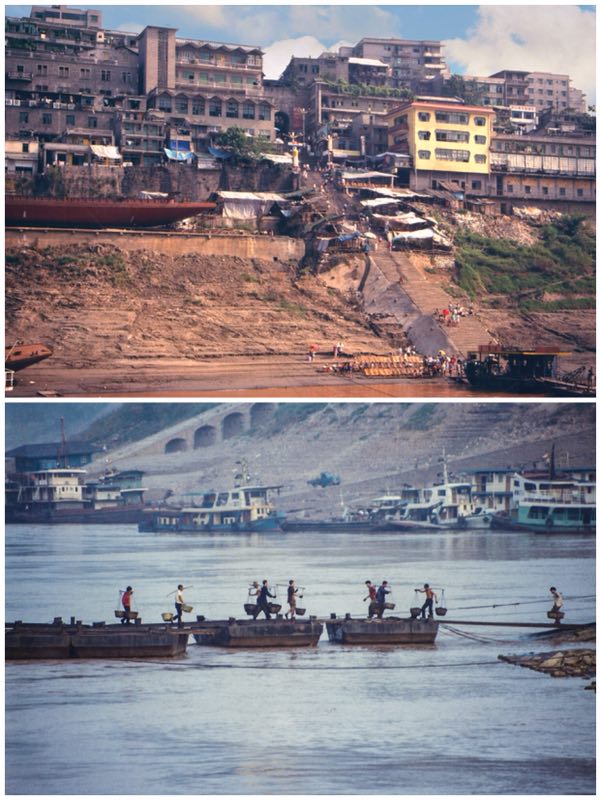 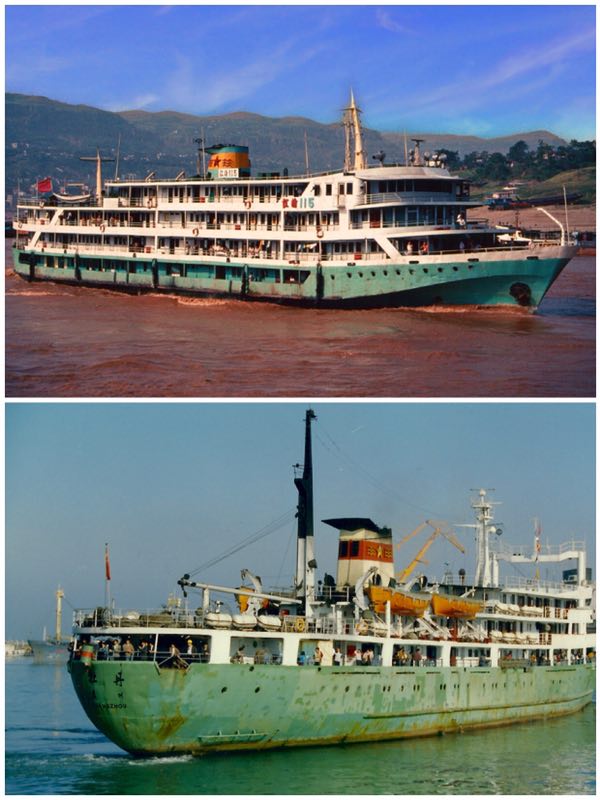 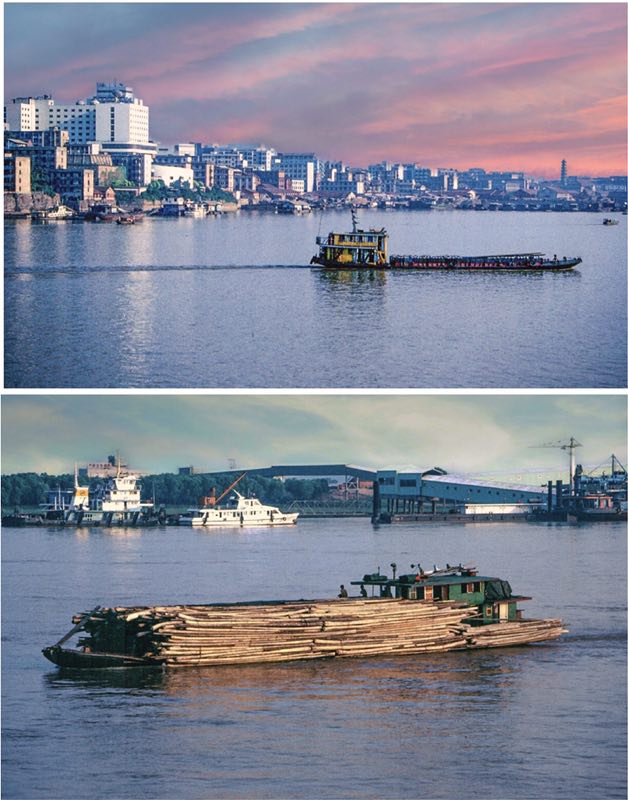 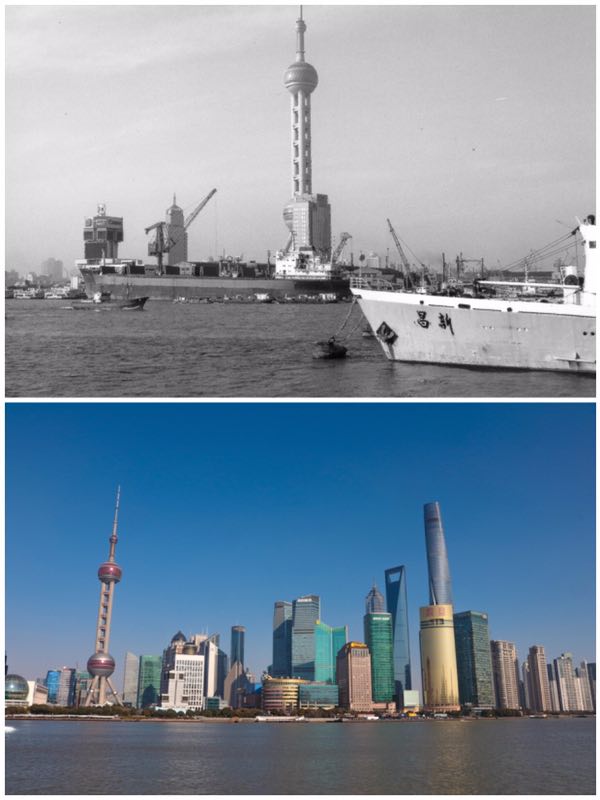 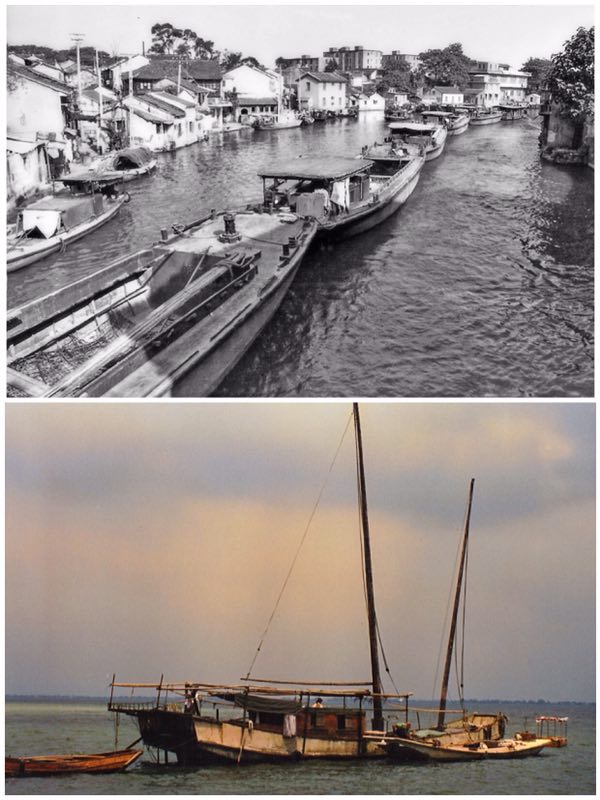 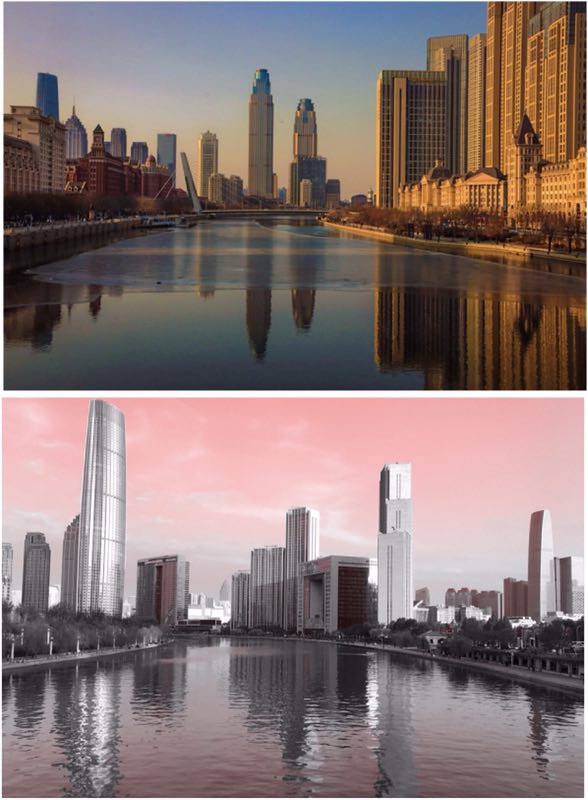