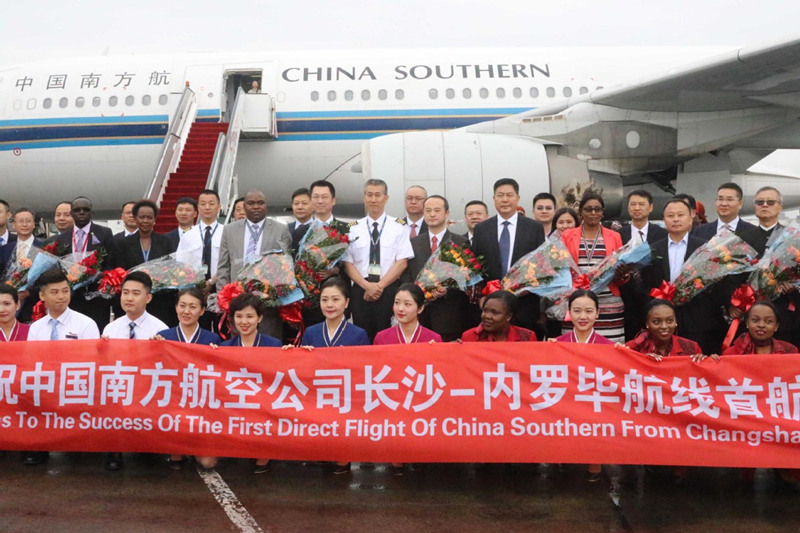 China Southern Airlines held a welcome ceremony for its first direct flight from Changsha to Nairobi at JKIA on June 12. [Photo by Liu Hongjie/China Daily]

The flight is the first non-stop regular route from Hunan Province to Africa, which will not only become a new travel option for residents in both countries, but also contribute to the promotion of the Belt and Road Initiative.

Speaking during the receiving of the inaugural flight on Wednesday morning at Jomo Kenyatta International Airport (JKIA), Abel Gogo, the airport manager, said the new flight has opened new opportunities for the east African country and the airport.

"This is a new opportunity for Kenya and JKIA, because it will facilitate transfer of our people, cultures and business," he said, "Looking at the portfolio of 230 passengers that arrived by the inaugural flight, it explains the kind of anticipation and interest that is already building up."

Gogo said the new flight has eased the travel for business people because they won't have to connect through other China's southern cities.

The new air route, which offers two flights each week, on Wednesdays and Sundays, will shorten the travel time from Africa to Hunan to 12 hours from 20 hours.

Passengers from Africa will thus be able to transfer from Changsha, taking advantage of the extensive route network of CSA, to other major Chinese cities, including Beijing, Shanghai, Guangzhou, Chengdu, Hangzhou and Xi'an.

Judith Nashipai, the supervisor CAS in Nairobi, said the number of passengers at the inaugural flight was encouraging, and noted that the total capacity of the flight is 260 passengers.

Nashipai said the choice of the direct flight to Changsha was dictated by the fact that it's an industrial city and therefore a preferred choice by many African business people.

She said they might increase the number of flights to Changsha depending on the response they will get, especially the number of people travelling from Nairobi.

"The non-stop flight will save passengers the headache of hours of transit wait," Nashipai said, "They will thus be able to conveniently plan for their trip or business meetings." Ticket price to Changsha range from $600 to $800.

Nashipai said the new direct flight, which will also be part of the code-share partnership with Kenya Airways, will further open up and strengthen the relationship between China and Kenya.

The flight is also expected to improve trade relationship between China and Africa. Over the past ten years, China has always been the largest trade partner of Africa, with the trade volume growing to $204 billion in 2018, a 20 percent increase on a year-over-year basis, CSA said in a statement.

Such increase in trade volume with Africa is also evident in Hunan province, which reached $2.8 billion in 2018.

The press statement also said that nearly $1 billion have been invested by more than 120 Hunan-based enterprises in Africa.

"With a solid cooperative foundation as well as the complementary industrial structures of the two, there is a huge potential and prospect for Kenya to carry out multi-faceted cooperation with Hunan in wide-ranging areas," CSA said.

Prior to the launch of the new air route, CSA has been operating two direct flights per week, on Mondays and Fridays between Nairobi and Guangzhou.

According to Nashipai, the volume of passengers per month on the route has been 8000.

China Southern Airlines transported 140 million passengers in 2018. The airline has the largest fleet in Asia.