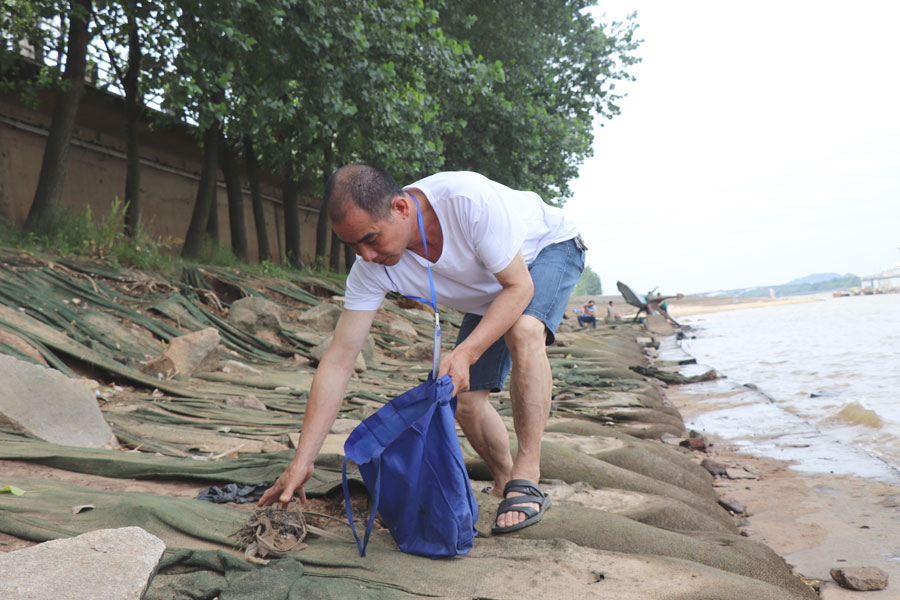 Zhou Haiming collects garbage on the banks of a section of Xiangjiang River for which he is responsible as a river chief in Changsha, Hunan province. [Provided to China Daily]

Changsha native Zhou Haiming has rescued locals from the river for years, but his efforts went largely unnoticed

Years ago, the dog days of summer in southern China meant spending a lot of time in the river. For many children growing up by the Xiangjiang River, the largest in Hunan province, it was more like a water park. However, those cool waters could be dangerous if they were not careful.

One summer day in 1975, Zhou Haiming went to the river in Changsha, capital city of Hunan, to meet his friends. Every week, the boys would swim in the wide and sluggish river. As a son of a local fisherman, Zhou was trained to be a swimmer, and his skills were put to the test that day.

As he was preparing to jump into the river, Zhou caught sight of a girl struggling in the water. Zhou quickly dived into the river to rescue the girl, who was underwater and gasping for air.

"I jumped into the water immediately and swam to the girl," Zhou said. "After I found her, I grabbed hold of her hand and tried to swim back. I had never done that before, but all I was thinking about at that time was to pull her back with all my strength."

Within a few minutes, Zhou had dragged the girl back to the riverbank. She was saved. However, when the police and doctors arrived, Zhou left quietly.

The girl he saved was 13 years old, while Zhou was only 12 years old at the time. That day was probably an ordinary day for most people, but it marked the start of Zhou's river rescues. Over the next four decades, he jumped into the same river 12 times and saved 14 lives. 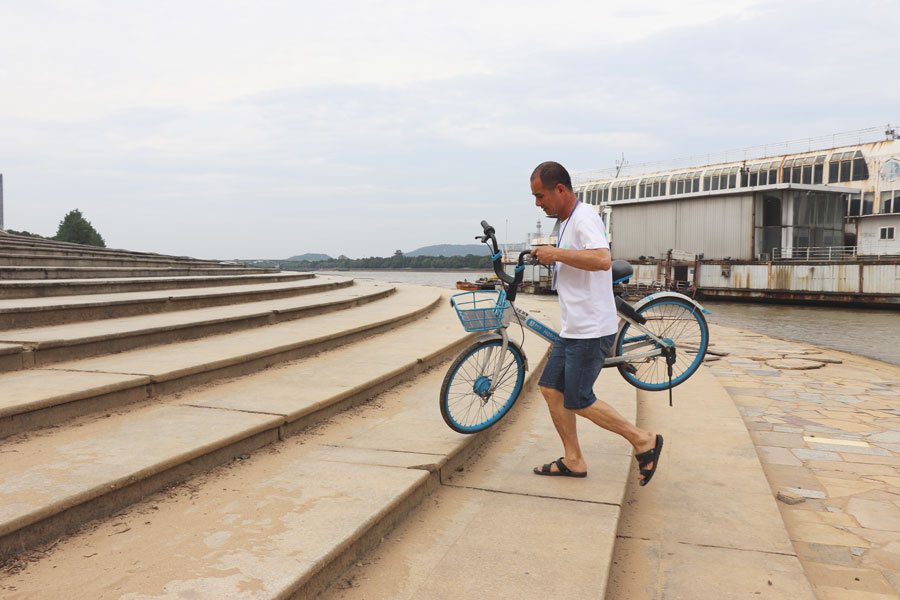 Zhou moves a randomly parked bicycle from the banks of the Xiangjiang River. [Photo by HAN BINGYU/FOR CHINA DAILY]

"People fall into the river for different reasons. I have rescued some people who accidentally fell out of boats and some greenhorns who tried to swim in the river, but I do not understand people who jump into the river to commit suicide, especially pregnant women," Zhou said.

In November 2010, Zhou was walking along the riverbank when he suddenly heard shouts from a crowd that a woman had fallen into the water. He quickly took his coat off and jumped into the bone-chilling waters of the river. Zhou gave her mouth-to-mouth resuscitation after pulling her up back on land, and the woman eventually regained consciousness.

"To my surprise, the woman was six months pregnant, and she told me that she had a fierce argument with her husband. She decided to end her life by drowning.

"I could only persuade her not to, in her unstable state, even though I totally disagreed with such a decision," Zhou said. "But no matter what, I saved two lives and that was gratifying."

However, not all his rescues proceeded smoothly. Zhou will always remember a rescue he made at the end of August 1979, when two teenage girls were drowning after swimming into deep water.

There were few people around, and Zhou did not have time to call more people for help, so he jumped into the river alone.

When he approached them, Zhou saw one girl totally submerged. Zhou caught her by the hair with one hand, and used his other hand to grab the other girl's arm. He used all his energy to swim along while holding onto the two girls until someone on the nearest pier came to help him.

"I never thought about giving up, but you can imagine how hard it was to save two people at the same time. Luckily, there were people who came to help, because I was really exhausted," Zhou said.

"But to see life come back into a person, the responsiveness of the eyes, crying and coughing, that is probably the best sound you will hear in your whole life, and it does not matter if anyone knows that you are the rescuer."

Zhou's heroic deeds were not known till July 2014. After he saw a woman falling overboard, Zhou once again jumped into the river and saved her. However, he sprained his ankle badly, and a friend had to call a doctor. That attracted the attention of the local media who were at the scene, and that was how the locals of Changsha came to know their hero.

"I knew how to swim at the age of 5. My family has been living by the Xiangjiang since my grandfather moved there. They taught me everything about the river and how to swim there, so I am very familiar with the directions of the river flow," he said.

Zhou's father became a fisherman like his grandfather after retiring from the army, and he was also a frogman on a rescue team. However, his father was injured during a rescue operation.

"My father would never think twice about putting his life at stake to help people, and his actions were an inspiration to me. He died years ago, but I believe what I did is a way to carry on his spirit," Zhou said.

He was appointed to be the river chief of a section in the Xiangjiang River in 2017, and the long-haul cargo driver uses his spare time to patrol the river, and is always ready for his next mission - Zhou's life is inseparable from the river.