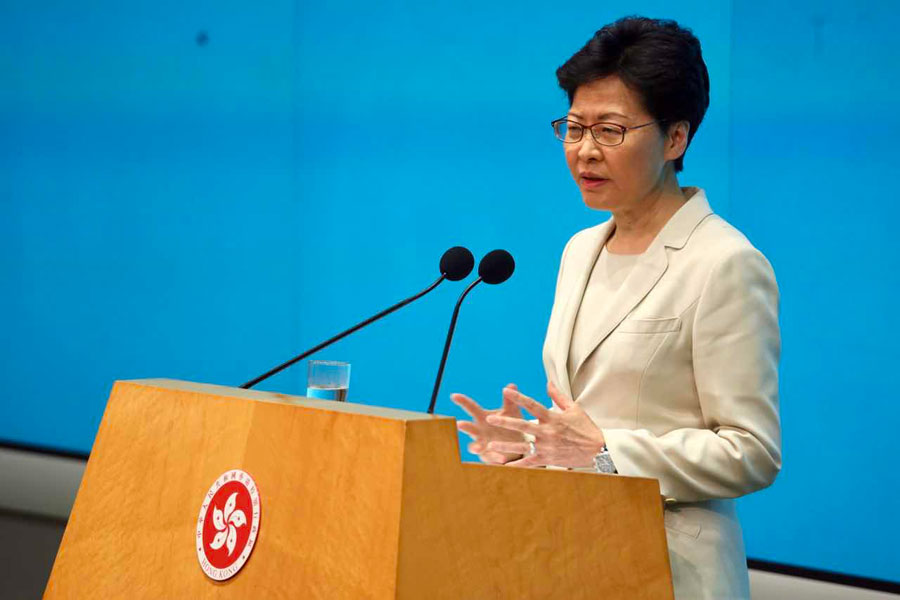 Hong Kong's Chief Executive Carrie Lam Cheng Yuet-ngor said she will redouble her efforts in serving the special administrative region and improving livelihoods and governance in the city for the remainder of her term.

Lam vowed to do her utmost to rebuild trust among the people of Hong Kong after the extradition bill controversy.

In a news conference on Tuesday, Lam offered her "most sincere apologies" to all people of Hong Kong for the anxiety and disputes caused by the SAR government's handling of amending the extradition law.

As the SAR's leader, Lam said she must shoulder "the largest responsibility" for the situation.

Following two mass public demonstrations against the extradition bill in the past two weeks, Lam said she was saddened for those who were injured, including demonstrators, police officers and journalists.

Over the past two weeks, hundreds of thousands of people marched in Hong Kong against the bill. Violent clashes between radical demonstrators and police erupted, injuring more than 100 people, including 22 police officers.

"I truly hope that those injured can fully recover soon, and that the rift in society could be quickly mended," Lam said.

The SAR government remains committed to numerous economic and livelihood issues over the next three years of her current term, Lam said, and she pledged to do better in balancing diverse interests, listen more to voices from all walks of life and strive for more opportunities for the people of Hong Kong, especially young people.

Responding to controversy over the extradition bill, the SAR government pressed the pause button to the amendments on Saturday, followed by Lam's written public apology on Sunday. By suspending the legislation in the Legislative Council, Lam hopes society can return to harmony and avoid injuries to anyone.

Meanwhile, she reiterated that the SAR government will not resume the legislative process if controversies and anxiety over the bill are not fully addressed. The current term of the Legislative Council will expire in July 2020.

"It's very unlikely that the bill will make the deadline of the end of this term (of the council). Should that happen, the government will accept the reality," she said.

Sixteen non-official members of the Executive Council-the top policy advisory body to the chief executive-said in a statement following Lam's news conference that they will do their utmost to assist the chief executive in the long-term interests of Hong Kong.

Starry Lee Wai-king, a legislator and chairwoman of the Democratic Alliance for the Betterment and Progress of Hong Kong, the largest party in the Legislative Council, said she hoped the incident would quiet down soon as there are numerous important economic and livelihood issues to be addressed.