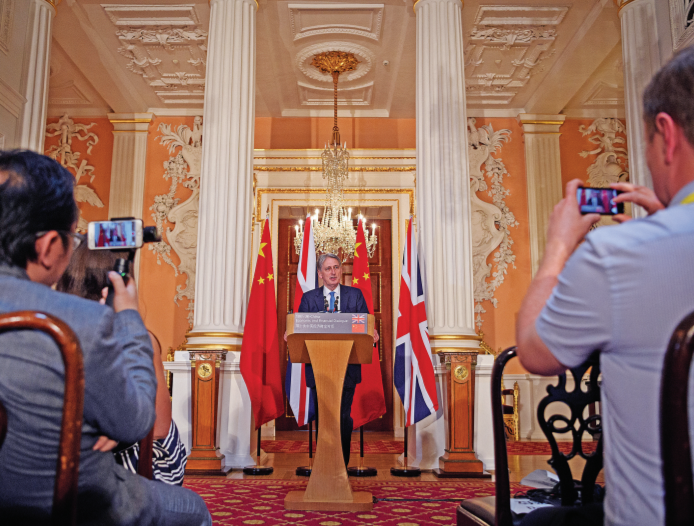 Britain's Chancellor Philip Hammond takes questions from the media after a joint news conference with Vice-Premier Hu Chunhua following talks on economic and financial ties between the two countries in London on Monday. LEON NEAL/POOL/REUTERS

China and the United Kingdom expanded and strengthened economic links amid global headwinds, and the closer relationship in trade, investment and financial services will help both nations resist external shocks, economists said.

Their comments came after the Ministry of Finance posted 69 policy outcomes in a document late on Monday night as the 10th China-UK Economic and Financial Dialogue concluded in London.

The economists agree that the strengthened economic ties between the two countries are in the UK's interest as it looks to bolster trade ties with major economies before leaving the European Union. Meanwhile, China has also been taking measures to consolidate growth momentum given softening global economic development and the near-term risks from trade tensions.

The two countries agreed to prioritize strengthening efforts to help de-escalate global trade tensions and work to resolve the current crisis through the World Trade Organization Appellate Body during a dialogue co-chaired by Vice-Premier Hu Chunhua and British Chancellor of the Exchequer Philip Hammond.

China will promote further opening-up of services, manufacturing and mining in the next revision of its current negative list－a list that restricts market access to specified industries, Hu said, adding that UK companies can legitimately repatriate profits made in China back to the UK.

Some other key milestones reached during the dialogue include the launch of the London-Shanghai Stock Connect with Huatai Securities being the first issuer of global depositary receipts on the London Stock Exchange; an agreement to widen Chinese market access for British beef and pork; a new private sector fund targeting 1 billion pounds ($1.25 billion) to help UK firms expand into Chinese markets, and deepening cooperation on infrastructure projects that meet international standards.

Foreign Ministry spokesman Lu Kang said on Tuesday that against the backdrop of rising protectionism, the launch of the Shanghai-London Stock Connect has injected positive energy into efforts to advance the building of an open global economy.

Lu said the project is conducive to promoting shared growth of both Chinese and British capital markets and conforms to the interests of both countries.

It also demonstrates once again that China will never slow its pace in deepening reform and expanding opening-up, the spokesman said, adding that the country will continue to firmly pursue a path of openness and development for mutual benefit and win-win results.

"From China's perspective, the pledges made by both sides in the dialogue are encouraging. It helps to show that China is supporting multilateralism and will continue to open up further to foreign companies," Tommy Wu, an economist with British think tank Oxford Economics, said on Tuesday.

"I would expect the pledges, if realized, to bring long-term benefits to China in terms of helping China to make progress in financial liberalization and reform, and to push forward the renminbi to become an international currency through the London market," Wu said.

Moreover, the UK can benefit from having easier access to the Chinese market, he said.

"External headwinds are unlikely to dissipate anytime soon given the escalation of trade tensions between the US and China, the possibility of US tariffs on Europe-an autos later this year and the continued uncertainty about when and in what way the UK will leave the EU," Fitch Ratings said on Tuesday.

Fitch said that US auto tariffs or a disorderly no-deal Brexit could reduce the UK's GDP growth and impact the eurozone economy. The slowdown in world trade is also taking its toll on the UK's open economy with a sharp fall in the manufacturing sector.

Christopher Bovis, a professor of international business law at the University of Hull, said this round of dialogue signified the importance of the future of Sino-UK trade relations, with an emphasis on large infrastructure projects and financial services.

"Both economic sectors will benefit enormously from Chinese investment in the UK, and China is expected to reciprocate with more market access to its evolving economy," he said.

Since the first China-UK Economic and Financial Dialogue in 2008, trade in goods and services between the two countries has more than doubled from 32 billion pounds to a record 69 billion pounds in 2018, with bilateral investment having almost tripled, according to the UK government.

Cao Desheng contributed to this story.