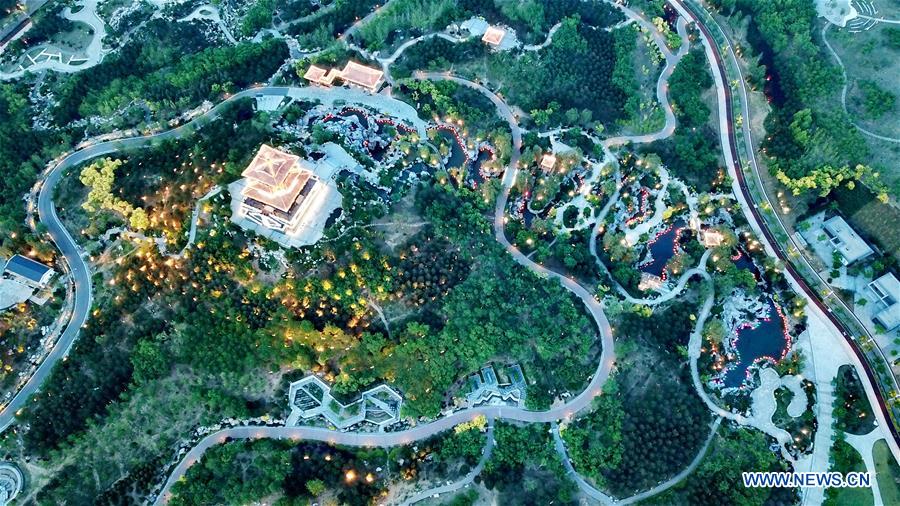 SHIJIAZHUANG, June 23 (Xinhua) -- With the head sheaves whirling on top of the derrick, the century-old No.1 pit of the Kailuan colliery still lifts coal from deep underground. The icon of the old industrial city of Tangshan is also a tourist site.

The shaft, the country's earliest of its kind that began operation in 1881, is at Kailuan national mining park, a sign of modern industrial heritage that includes the country's first rail track with a standard gauge. Culture and tourism are just part of the efforts of the mining company and the city's diversified development.

Like Germany's Ruhr region, Tangshan, to the east of Beijing, is one of China's old industrial bases with major coal, steel and chemical industries. As China deepens supply-side structural reform for high-quality growth, the coastal city is struggling to upgrade its traditional sectors, cut pollution and foster emerging sectors through innovation, investment and integrated regional development.

In recent years, the mine has been facing woefully inadequate resource reserves. "The transformation is pressing," said Zhang Yuliang, a senior executive of Kailuan (Group) Limited Liability Corporation.

To promote structural transformation, the company decided in 2017 to optimize and strengthen its backbone industries -- coal, coal chemical industry and modern services -- with advanced equipment and technology, and develop strategic emerging industries such as new energy and new materials.

"The corporate research team has been developing new coal chemical products to extend the industry chain toward the high-end," Zhang said. The company has piloted intelligent mining with one unmanned working face, conducted mixed ownership reform of its subsidiaries, and gone global with a mine-related service business in India and Kyrgyzstan.

Last year, the company's revenue hit 76 billion yuan (about 11 billion U.S. dollars). The coal chemical sector accounted for nearly a quarter of the total revenue and its profit soared by 146 percent year on year, while the logistics services created revenue of over 40 billion yuan.

As China made cutting overcapacity one of the major tasks in supply-side structural reform in late 2015, Kailuan was assigned to cut coal capacity by 18.55 million tonnes from 2016 to 2020 by the provincial authorities, involving 25,000 workers.

"Kailuan encountered difficulties in the first two years of the reform. My salary was sometimes delayed," said Li Wei in charge of the company's electrical and mechanical department.

"Today's Kailuan is quite different from the past when my grandfather and father worked there. What it needs is not more labor but technological innovation," he said. Li joined Kailuan after graduating in automation at Hebei University in 2008.

Intelligent production is also promoted by HBIS Group Tangsteel Company, a large steel enterprise founded in Tangshan in 1943. Designed to produce 1.8 million tonnes of finished products a year, the high-strength automobile plate factory has been a landmark project of Tangsteel to upgrade products with intelligent manufacturing.

"We have made big efforts to push technological progress and upgrading of products through investment and cooperation with institutes and universities," said Wang Lanyu, chairman of Tangsteel, a major subsidiary of Hebei Iron and Steel Group Co., Ltd. (HBIS), one of the world's largest steelmakers.

"Through hard work, Tangsteel has developed from a steel plant that used to produce ordinary construction steel into a large modern high-quality steel base for automobiles and home appliances," Wang said.

With a population of about 8 million, Tangshan is aiming to become a window city for economic cooperation in Northeast Asia, a new-type industrialization base in the Bohai Rim area and an important pivot of Beijing's economic circle. In 2017, Tangshan became one of the country's first 12 cities or economic zones which are demonstration areas for industrial transformation and upgrading.

Home to CRRC Tangshan Co., Ltd., one of China's major high-speed train manufacturers, the city has established an intelligent rail transit industry alliance and an innovation and development center for the rail transport industry.

"We invest more than 6.5 percent of our main business revenue in research and development each year to ensure our leading position in technology," said Lu Wentao, general manager of CITIC Heavy Industry Kaicheng Intelligent Equipment Co., Ltd. in the high-tech zone.

From January to April, the added value of the five emerging sectors jumped by 31.9 percent, or 20.7 percentage points higher than the average growth of the city, data from the Tangshan Industry and Information Technology Bureau showed.

"We take key emerging industrial projects as a booster for development," said Chen Jingming, deputy head of the municipal development and reform commission.

In the first quarter, Tangshan's GDP saw a year-on-year growth of 7.8 percent, the highest growth rate of the city in Q1 since 2014.

"Tangshan is in an overlapping period in which traditional industries experience arduous transformation while emerging industries are being fostered," said Zhang Gui, an expert on Beijing-Tianjin-Hebei integrated development at Hebei University of Technology based in Tianjin.

"Technological innovation is the lifeline for the successful transformation of old industrial bases," Zhang said. "Tangshan must embrace the new round of industrial revolution backed by the Internet, big data and artificial intelligence."

According to the 2019 Global Cities Outlook report by A.T. Kearney, an international consultancy firm, Tangshan ranks as the world's 77th most promising city.

The cargo throughput of Tangshan Port reached 637 million tonnes last year, jumping to third place in the country's coastal ports. In the first five months this year, the port's throughput grew by 7.1 percent year on year to reach 265 million tonnes.

As a new port area of Tangshan Port, the Caofeidian port zone in Caofeidian District is booming. It boasts two of the country's seven approved berths that can dock vessels of 400,000 tonnes. With a total of 101 berths for ore, coal, crude oil, LNG and containers, Caofeidian port zone has a handling capacity of 470 million tonnes.

With direct sea trade routes to more than 70 countries and regions, Caofeidian is a new growth pole for Tangshan as well as the Beijing-Tianjin-Hebei region. It has attracted hefty investment and emerging industries from Beijing under plans to jointly build Caofeidian into a demonstration zone for integrated development.

Last year, Caofeidian port area realized a logistics trade volume of 100 billion yuan. This year, the figure is expected to double. The booming port area aims to develop into the world's largest logistics center for coal and ore.

FROM BLACK TO GREEN

Besides cutting industrial capacity in such sectors as coal and steel, the resource-based companies are urged to adopt advanced, new craft to cut pollution and try to realize green production.

From 2013 to 2018, Tangshan has slashed nearly 80 million tonnes in iron and steel production capacity, dismantled and sealed off 147 converters and furnaces, and closed small polluting factories. The number of iron and steel firms in the city was cut by one third, from 58 in 2012 to 38 last year.

Apart from zero discharge of waste water, Tangsteel has invested 2.7 billion yuan in a number of projects aimed at reducing emissions and saving energy over the past two years, realizing ultra-low emission in all production lines. The company also took the initiative in cutting the emission of carbon monoxide.

"Tangsteel has been pursuing green transformation to realize green manufacturing," said Wang, chairman of the company.

In July, a greening project, "the Tangshan Sea of Flowers" in the Kaiping district, will open to the public as part of the city's efforts to restore damaged environment and develop tourism.

The Nanhu area in downtown Tangshan used to be an untreated mined-out area and a stinky garbage dump. After massive restoration efforts, it has become a scenic park free to the public. Last year, it received 4.8 million tourists.

"We will make the Nanhu area an attractive and dynamic zone and an emerging growth point to serve the city's strategic transformation," said Xue Shaojiang, an official with Tangshan Culture &Tourism Group, a firm devoted to the city's tourism development. 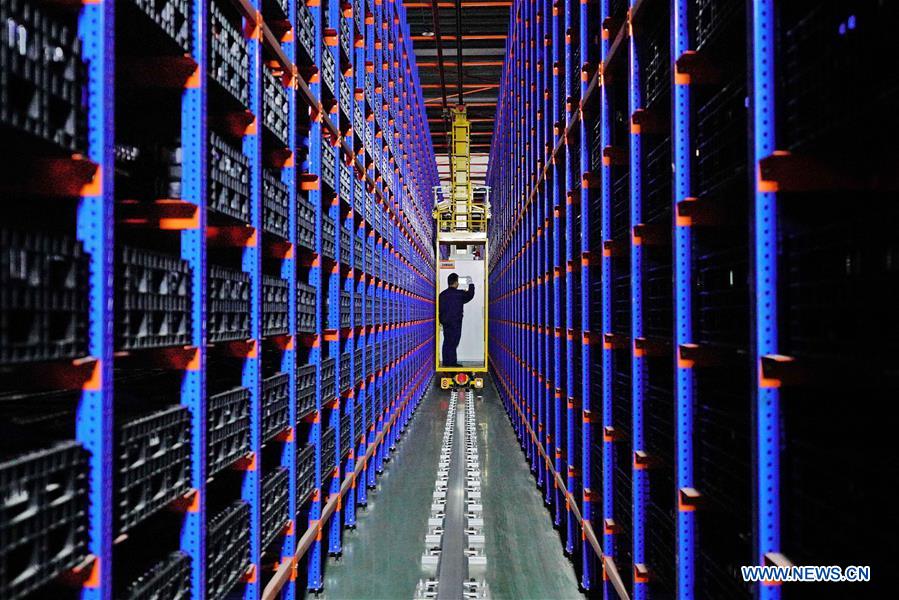 A worker is seen at a lithium battery manufacturing plant for automotive use in Tangshan, north China's Hebei Province, April 11, 2019. (Xinhua/Yang Shiyao) 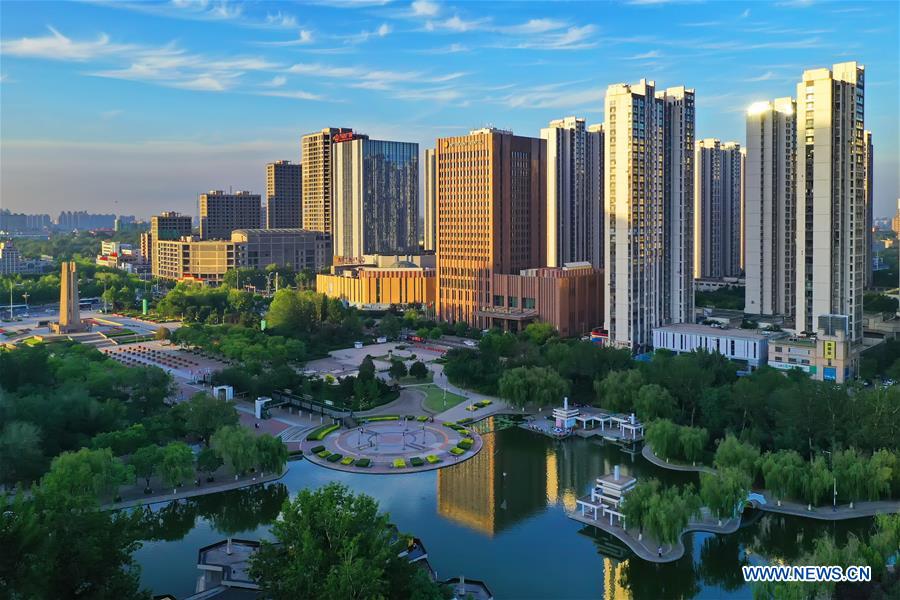 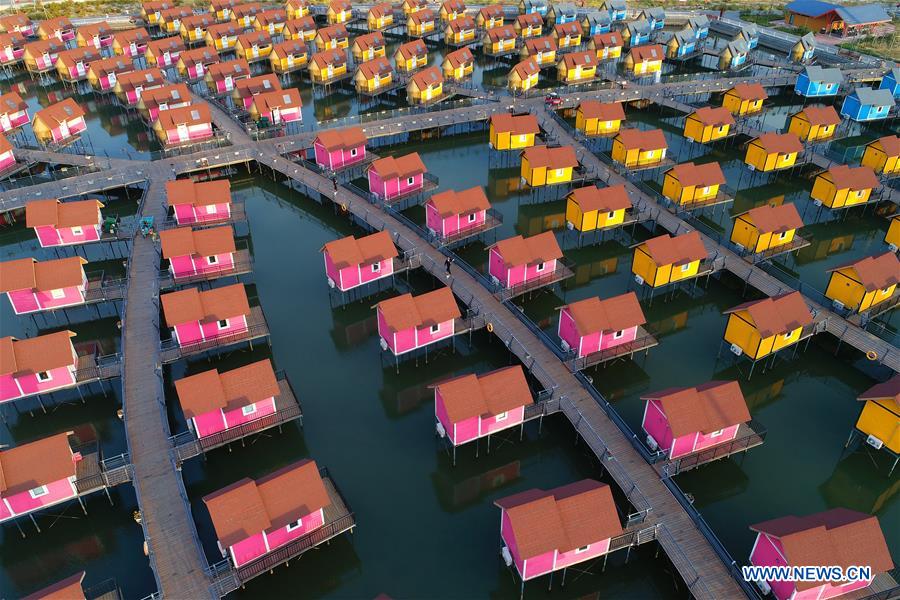 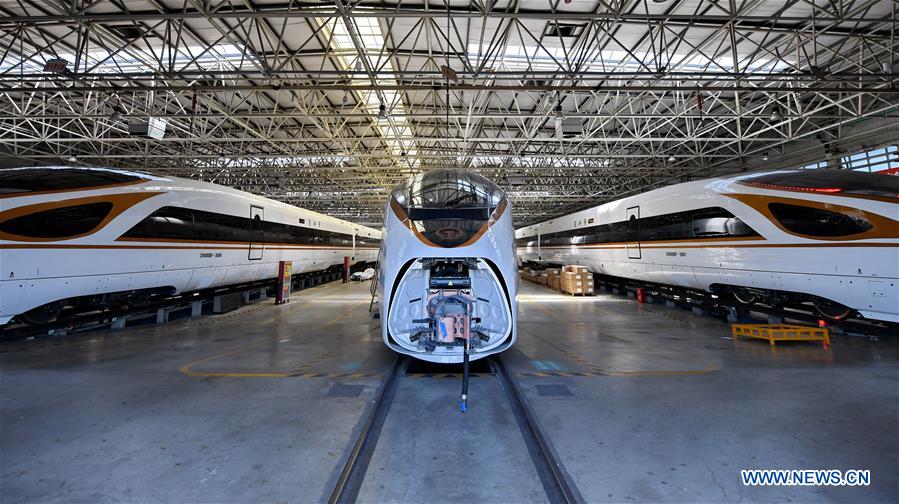 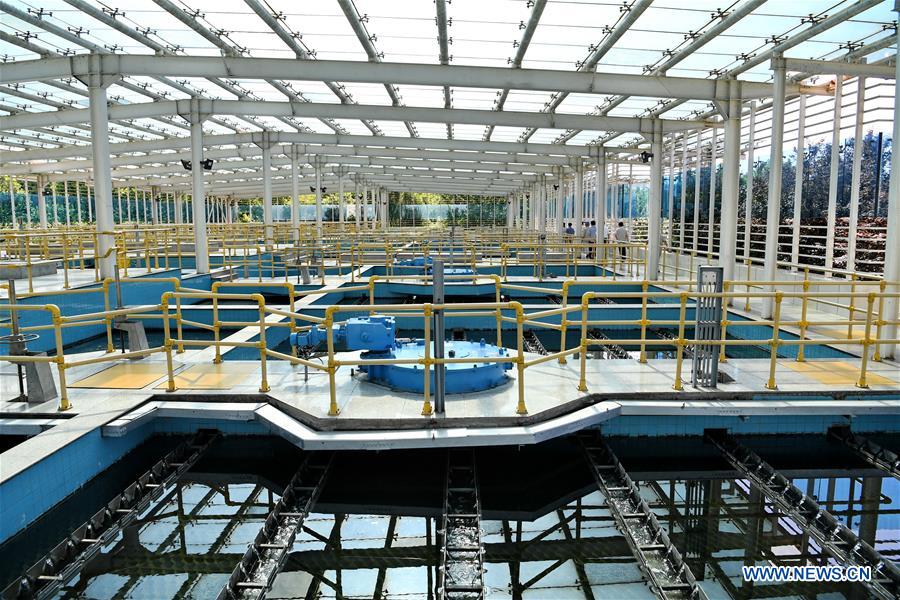 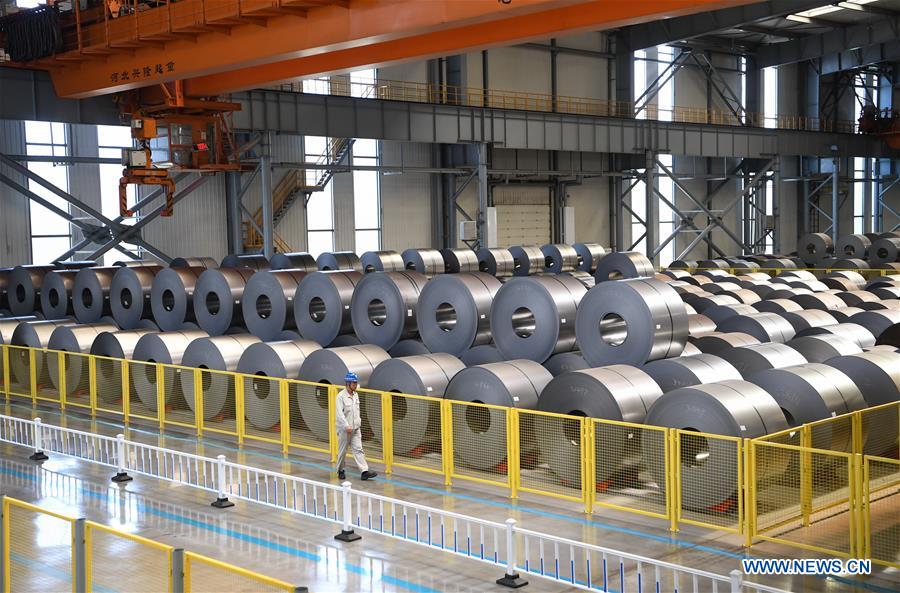 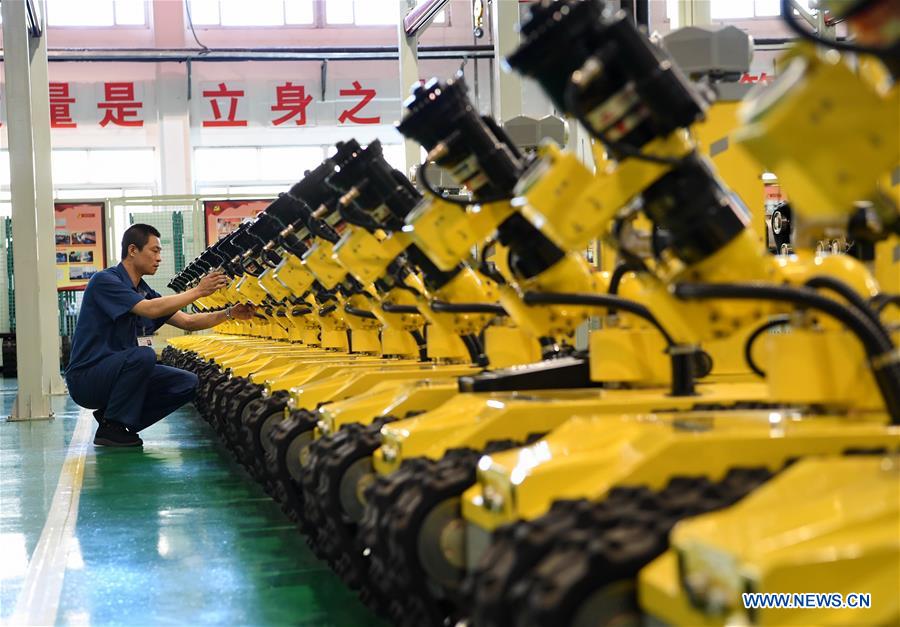 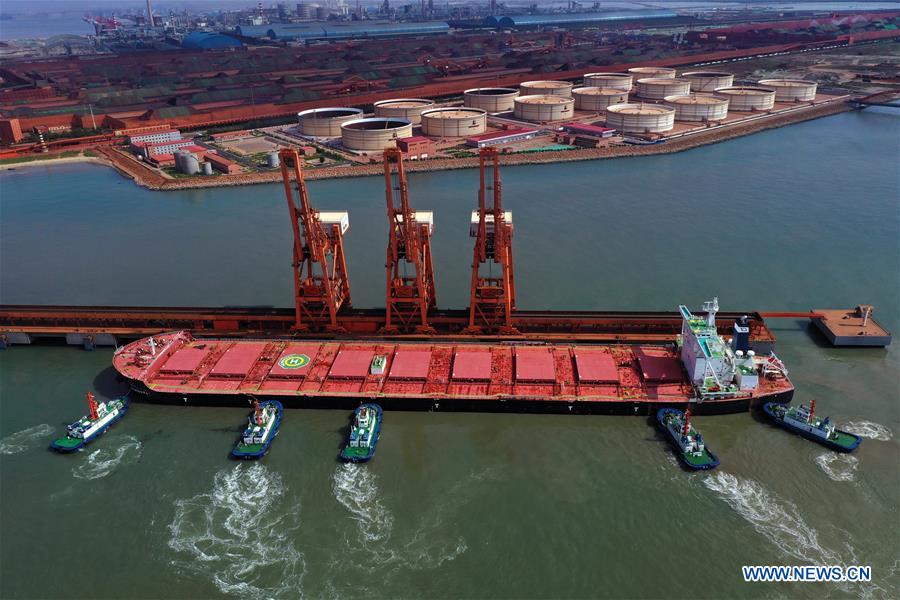 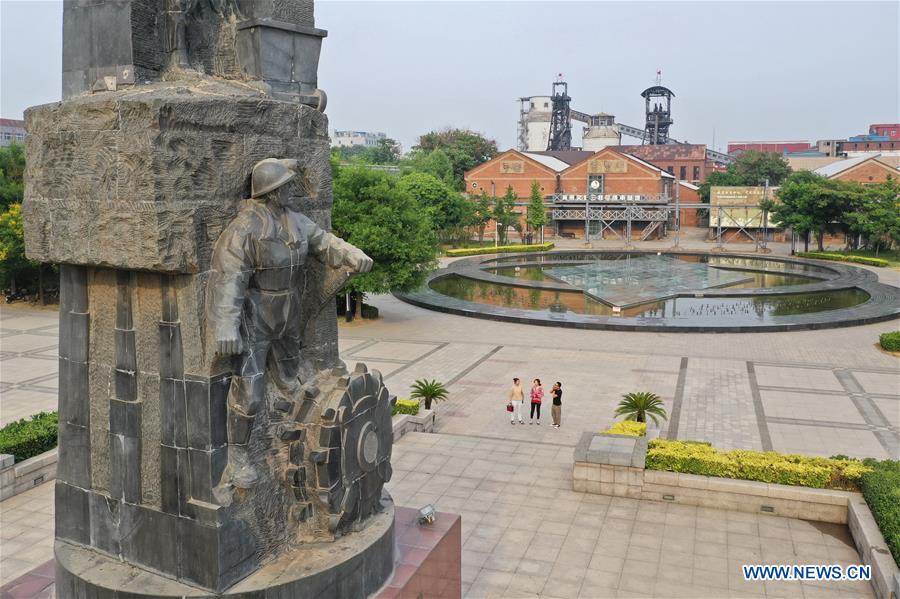