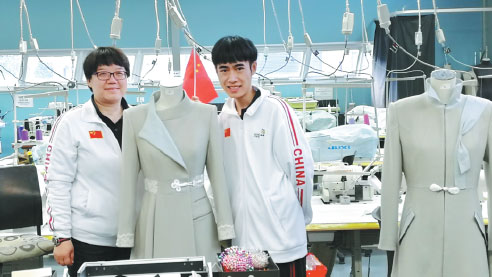 Tan Huiwen and his teacher pose with his work at the 2019 Global Skills Challenge in Melbourne, Australia, in early April. [Photo/China Daily]

Tan Huiwen, China's second winner of international skills competition, has designs on a career in Shanghai or Shenzhen

China's second winner of an international skills challenge in fashion technology, 22-year-old Tan Huiwen wants to become a fashion designer now that he has graduated from vocational college.

Born in Zhuzhou, Hunan province, Tan has been an art lover since he started learning how to paint at the age of 3. He graduated from the Hunan Arts and Crafts Vocational College in Yiyang in late May.

"My schoolteacher told me I was gifted in painting, which inspired me to learn arts related disciplines," he said. "Actually, I didn't do a good job of studying, so I chose vocational courses for both my senior high school and college."

Tan said his parents were not willing to send him to vocational school at first.

"Living in the countryside, their recognition of skills and vocational schools is limited," he said. "They hoped I would be admitted to a college and become a civil servant, living an average but stable life.

"Thankfully, my older sister persuaded them. Now, they are my supporters."

Tan has won several competitions at home and abroad, but he knew nothing about fashion design when he began his first year at vocational college in 2013.

"I had no idea what fashion design was at the time. What I knew was that I loved the arts and the subject that I got to learn was the arts, and that's it," he said. "Fortunately, the courses were not as difficult as I'd imagined. The teacher introduced the subject of fashion design with some simple lessons, like sewing, for example, which were rather helpful."

Praise from his teachers encouraged Tan to strive for excellence in class and afterward. "Once I received a compliment, I wanted more," he said. "I think it's the recognition of my work that motivates me to do a better job next time."

With a sharp eye for design, Tan was selected in June last year as one of 10 candidates for the national team preparing for the 2019 Global Skills Challenge.

"The selection process was painstaking, as well as the preparation for the competition in Australia," he recalled. "It was a real challenge but an unforgettable memory." 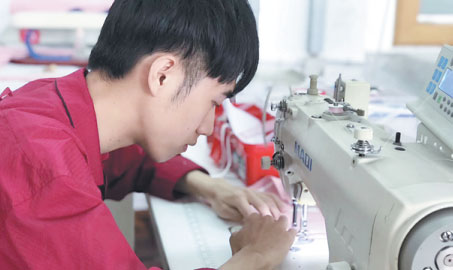 Tan works on a design at the Hunan Arts and Crafts Vocational College in Yiyang, Hunan province. [Photo/China Daily]

Tan encountered more challenges during the competition in Australia.

"The project that I was involved in was called fashion technology," he said. "It covered nearly all aspects of the design and production process, including sketching, pattern-making, cutting and construction techniques for different types of garments."

For the competition, competitors were asked to design a Russian-style coat with a decorative knot button.

"The organizers told us that the colors we would use were army green and red, but they were changed to light gray and blue when the challenge began," he said.

The mannequin the organizers offered him was also different from what he was used to in China, posing yet another challenge.

"The mannequin had the body curves of foreigners, who have chubby breasts and buttocks, very different from those of Asians," Tan said.

The competition lasted about 18 hours, with the competitors able to take a break every two or three hours before submitting their finished piece.

Since beginning his fashion studies, Tan has enjoyed sharing his achievements with his parents and has taken to making suits for them each Spring Festival.

He now hopes to find a job in fashion design in Shanghai or Shenzhen, Guangdong province.

"I've studied garment design for six years. I won't give it up," he said. "The most important thing is that I really love it and want to do something great in this field."

Zhou Mojun in Changsha contributed to this story.