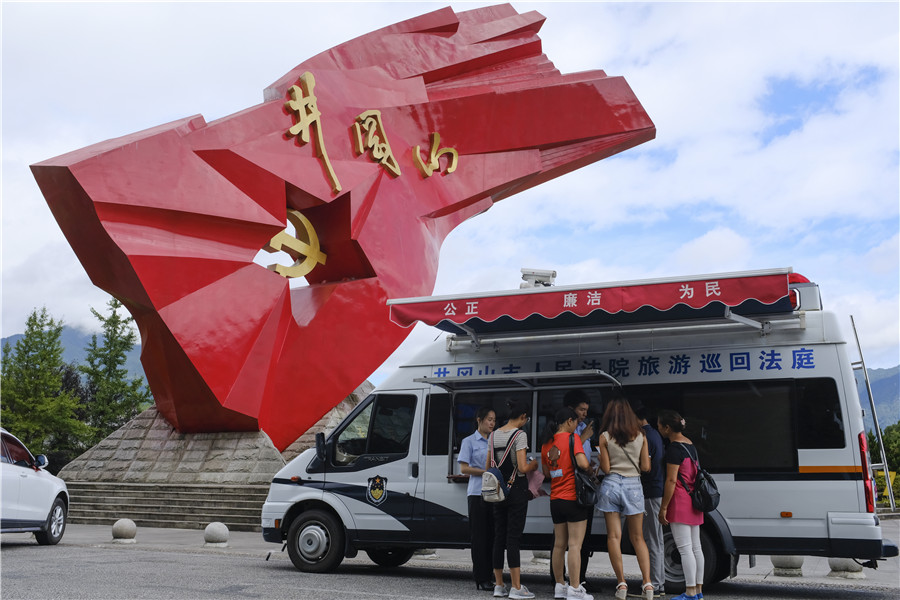 Liang Jun (middle), a judicial official in Jinggangshan, Jiangxi province, provides tourists with legal assistance at a minibus that serves as a mobile courtroom at several scenic spots. [Photo provided to CHINA DAILY]

Last month, Liang Jun, a judicial official in Jinggangshan, Jiangxi province, received a late-night phone call at home. After hanging up, he quickly drove a minibus bearing the logo "Tourism Court" to a restaurant near a scenic spot.

The call had been made by the restaurant's owner, who wanted to resolve an argument over a trivial matter between two groups of tourists.

To that end, he phoned a 24-hour hotline operated by Liang's "tourism and environment court" and also called the police.

After both parties had calmed down, Liang explained the relevant law and told them how much time and money would be involved if the case were brought to court. The dispute was solved via mediation a short time later.

The Jinggangshan People's Court established Liang's court to work with the public security authorities and tourist trade regulators to solve disputes. The model, established in 2016, has prevented much unnecessary litigation and helped boost tourism in the area.

"The police mainly deal with criminal cases and maintain order at scenic spots, and we mainly cover tourist-related financial disputes," Liang said. "In addition to case hearings, our job involves explaining the law and mediating in conflicts, and I believe we're better suited to it (than police officers)."

In his view, resolving disputes at the early stages to prevent them from becoming bigger issues is good news for local residents because litigation is sometimes a less-helpful solution. Instead, mediation has prevented many potential court cases, especially in light of a boom in "red tourism".

In recent years, China has stepped up efforts to promote red tourism, which revolves around visits to sites with significant revolutionary history.

Statistics from the Ministry of Culture and Tourism show that an average 800 million red tourism trips are made every year, and in March, 33,315 sites and memorials nationwide were designated as "revolutionary".

According to the provincial tourism academy, Jiangxi saw 471 million tourist trips in 2016, with 143 million, or about 30 percent, centered on red tourism in places such as Jinggangshan and nearby Ruijin city, acknowledged centers of early revolutionary activity by the Communist Party of China.

"We felt the rising number of tourists was sure to bring a surge in the number of disputes. So, about three years ago, we started working with other government departments to provide better legal services for visitors," Liang said.

Liang's tourism court has established legal stations in five major scenic spots in Jinggangshan, and the hotline number is posted in prominent places.

Every day, Liang and his colleagues travel back and forth between the scenic spots in the minibus resolving disputes between operators and tourists. Liang said the service is akin to a mobile court.

The interior of the minibus resembles a courtroom, where judicial officials sit in the middle and the two parties sit on either side. If no solution can be found through mediation, cases can be filed within 10 minutes because the vehicle is equipped with a printer and a fax machine.

The people's court in Ruijin has also established a lower court to solve tourist-related disputes, though it does not use a minibus.

"When we handle these disputes, we hope tourist agencies and scenic spot operators will be encouraged to regulate their management and services," said Deng Zeping, presiding judge at Yeping court, which is under the jurisdiction of Ruijin People's Court.

In the past two years, Liang's environmental and tourism court has successfully dealt with more than 30 cases, while its counterpart in Ruijin has resolved nine such disputes, according to statistics provided by the two courts.

"The number of court cases is low, because lots of disputes are resolved through mediation or the litigants drop their legal action after accepting our suggestions," Liang said. He added that the peak times are weekends and festive periods, such as the seven-day National Day holiday, when he can field eight or nine calls a day.

The disputes are mainly centered on contracts for tourism services or purchases, and compensation for personal injury. The services he and his team offer, including mediation and case filing, are provided free of charge.

"Our aim is to help tourists solve their problems before they leave Jinggangshan, because most are outsiders and they won't want to spend money traveling back to the city to attend court hearings," Liang said.

"To achieve that, we offer a 'quick channel' so tourists don't need to attend the court to resolve their disputes. Instead, their conflict can be resolved in the minibus."

In 2017, a tourist surnamed Wang was a beneficiary of the quick channel when his child broke a carving in a handicraft store during a family visit to Jinggangshan. Wang and the store owner were unable to agree on compensation, so Liang and his colleagues were contacted.

"The officials informed us of the regulations covering compensation and the responsibilities we both bore," Wang recalled. "They also outlined the disadvantages if I filed a lawsuit, such as the time and cost involved."

In the minibus, Wang accepted Liang's suggestion, and after mediation he paid the storeowner several thousand yuan.

"After all, we came to Jinggangshan for fun, not litigation," Wang said. "Thanks to the mediation service, we didn't miss any of our scheduled activities."

Deng, the judge from Ruijin, said: "The quick channel is not a green light for troublemakers, but if the two parties cannot agree, litigation is allowed. We want to end disputes before they start to stop them becoming aggravated. Also, as the mediation work is undertaken by court clerks and legal assistants, it leaves the judges with more time and energy to focus on complicated cases."

There is an old saw in China: 'Turn to the police when you are in trouble.' However, sometimes that isn't a practical way of handling disputes.

"Compared with judges, we are not good at legal explanations, especially in cases involving financial matters," said Xiong Da, an officer at Ciping Police Station in Jinggangshan. He welcomed the help provided by Liang's team, saying it has assisted many tourists who asked for a judicial official to rule on their dispute.

"Under China's criminal law, it was hard to file some cases where tourists reported the theft of small sums of money. They always asked the operators of scenic spots to help them find the money or even refund it, though sometimes they had just mislaid the cash. I think, judicial officials are better able to explain each side's responsibilities in such cases," he said.

Zhou Jianhua, director of the Law Enforcement Department for Scenic Spots at the Jinggangshan Management Bureau, agreed with Xiong.

"Before, many tourists complained to us when they had conflicts with operators of scenic areas, such as those involving ticket prices or personal injury, but our lack of deep knowledge of the law meant we had difficulty explaining how much compensation they should receive," he said.

"Now, the officials on the scene can explain exactly how much should be paid, which gives tourists a point of reference if they choose to bring a lawsuit, and also reduces the burden on us."

Deng said: "When a dispute happens, the tourists want to know who is right, who should shoulder most responsibility and how much compensation should be paid. These questions need clear, quick and professional answers based on the law, which is the job of the judiciary."

He regards every successful mediation as a legal lesson for operators and travel agencies: "The more regulated the tourism market is, the fewer disputes will occur."

In 2017, he handled a dispute in which a laborer attempted to sue a scenic spot operator after sustaining a fracture while painting walls in the area.

Deng's investigations discovered that the injury had been caused by the laborer's own carelessness.

However, having taken into consideration the fact that the man's injuries required medical attention, and the efforts he had made to complete the job, Deng called the two sides together to explain their legal responsibilities. He suggested that they resolve the problem via mediation, rather than litigation.

"If the laborer had insisted on litigation, he might have lost the case, while the operator of the scenic spot would have spent a lot of time on the judicial process," Deng said.

He added that the laborer accepted his suggestion that the operator should pay him several thousand yuan in compensation and improve safety measures at the scenic spot.