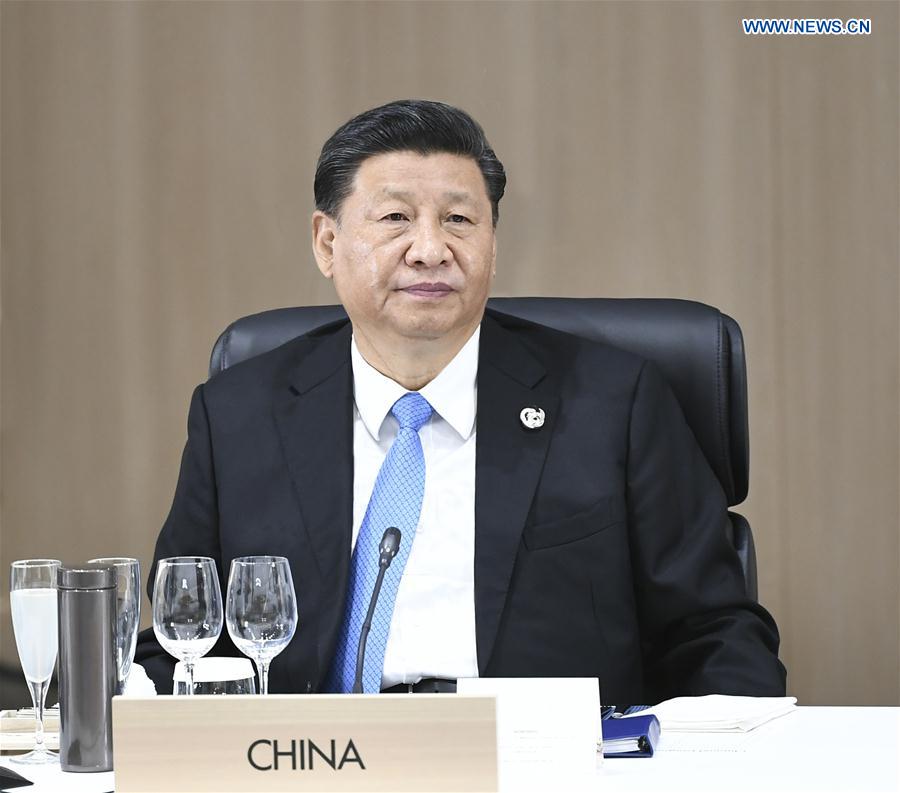 BEIJING, June 29 (xinhua) -- Attending the summit of the Group of 20 (G20) major economies and holding meetings with his counterparts, Chinese President Xi Jinping paid a three-day visit to Osaka, Japan, which has proved a success with expanding consensus on the promotion of multilateralism and providing direction for both the G20 cooperation and global growth.

Chinese State Councilor and Foreign Minister Wang Yi made the remarks while noting that the 14th summit happened at a historic moment when chaos and uncertainties have brought the world to a critical crossroads, and that Xi's tight diplomatic agenda marked China's continuous efforts as a reliable and responsible major country to help with broad visions and workable solutions.

Envisioning a new type of international relations and a community with a shared future for mankind, Xi's efforts were focused on promoting multilateralism, partnerships, mutually beneficial cooperation and joint development, which helped expand consensus, push forward cooperation, and increase confidence in global peace and development.

According to Wang, Xi's speech at the G20 summit struck an extensive chord and China's ideas received widespread support. In addition, the world is happy to see that Xi's meetings with other leaders will help shape healthier major-country relations, that new opportunities will come with the new measures Xi announced for China's further opening-up, and that Xi and U.S. President Donald Trump agreed that the two countries will restart trade talks.

During his trip to Osaka, by upholding multilateralism, the Chinese president guided the dialogue and discussions towards the direction of cooperation and inclusiveness in order to achieve win-win results.

Xi made four overseas trips since the beginning of June, setting a record for the history of the diplomacy of The People's Republic of China, Wang said.

Those proposals have outlined the direction to tackle the challenges facing the world economy, which is conducive to creating greater space for the global development and a better environment for international cooperation, Wang said.

With joint efforts, the G20 summit in Osaka has voiced support for multilateralism. It has been proven that upholding and practicing multilateralism is not just China's choice, but a consensus and wish of the majority of countries in the world, Wang said.

During the meetings, Xi urged more efforts to promote global governance based on the principle of extensive consultation, joint contribution and shared benefits, safeguard the international system with the UN at the core and the international law as the foundation, preserve the multilateral trade regime with the World Trade Organization at the core and the rules as the foundation, promote multilateralism and free trade, push forward the democratization of international relations, and build an open world economy, Wang said.

When meeting with UN Secretary-General Antonio Guterres, Xi said the more complex and severe the situation is, the more necessary it is to highlight the UN's authority and role.

As China's legitimate and lawful rights have been undermined by a series of unilateral and protectionist measures by the United States, China has to adopt necessary counter-measures, Wang said.

During the summit, Xi, at the invitation of his U.S. counterpart, met with President Trump, stating China's stance on fundamental issues concerning the development of bilateral relations, and conducting candid communication over major challenges facing the two sides, Wang added.

Summing up the experience and illumination in the past the four decades since China and the United States established diplomatic ties, Xi said the two sides both benefit from cooperation and lose in confrontation, and that cooperation and dialogue are better than friction and confrontation.

China and the United States have highly integrated interests and extensive cooperation areas, and they should not fall into so-called traps of conflict and confrontation, Xi said.

For his part, Trump said he values the good relationship with Xi and that it is of great significance for the two heads of state to maintain close contacts.

The U.S. side attaches importance to its relations with China, and harbors no hostility towards China, Trump said, adding that his country is willing to cooperate with China and that he hopes for better relations between the two countries.

During the meeting, Xi also reiterated the position of the Chinese government on the Taiwan issue, urging the United States to stick to the one-China principle and the three China-U.S. joint communiques.

The U.S. stance has not changed and it continues to pursue the one-China policy, Trump said.

When talking about the China-U.S. trade frictions, Xi emphasized that the essence of the China-U.S. economic and trade cooperation is mutual benefit and win-win, and that the two sides will eventually have to find a mutually acceptable solution to their differences through equal dialogue and consultation. Trump agreed with Xi in this regard.

Trump said the differences in such fields as economy and trade between the two sides should be properly settled, and that the United States will not add new tariffs on imports from China.

The most important consensus reached between the two heads of state is that China and the United States agree to continue to advance a China-U.S. relationship featuring coordination, cooperation and stability, Wang said.

They announced the restart of economic and trade consultations between their countries on the basis of equality and mutual respect. These significant consensuses send positive signals to the international community and global markets, Wang said.

As long as the two sides follow the principles and consensus established by the two heads of state, firmly grasp the correct direction of bilateral ties, expand cooperation based on mutual benefit, manage differences on the basis of mutual respect, and properly settle all problems that exist or will likely happen in bilateral relations, there is hope of a long-term and steady growth of the China-U.S. ties, and of more benefit to the two peoples and the people from other parts of the world, Wang said.

During the G20 summit and meetings with other world leaders, Xi explained China's development philosophy and cooperation proposals.

According to Wang, Xi stressed that China is confident in pursuing its path, handling its own affairs well, achieving peaceful co-existence and win-win cooperation with all other countries, which has enhanced their understanding and support for China.

Stressing that the Chinese economy is registering a stable performance with good momentum for growth, Xi introduced a clear attitude and the latest measures on opening up the Chinese market, expanding imports, improving business environment as well as advancing free trade arrangements and regional economic integration, Wang said.

The Chinese president said China is breaking new ground in opening-up and pressing ahead with high-quality development.

Meanwhile, during the summit, Xi invited all interested parties to join the Belt and Road Initiative, amplifying the positive effects of the second Belt and Road Forum for International Cooperation.

According to Wang, all sides are optimistic about China's development prospects, and believe that the new round of reform and opening-up measures announced by Xi are sincere and substantial, and the high-quality cooperation on building the Belt and Road corresponds with the trend of the times and the aspirations of people in the world.

It has been once again proven that China is a driving force for world economic growth, promoting openness in the world and providing a major market for other countries to explore business opportunities, Wang said.