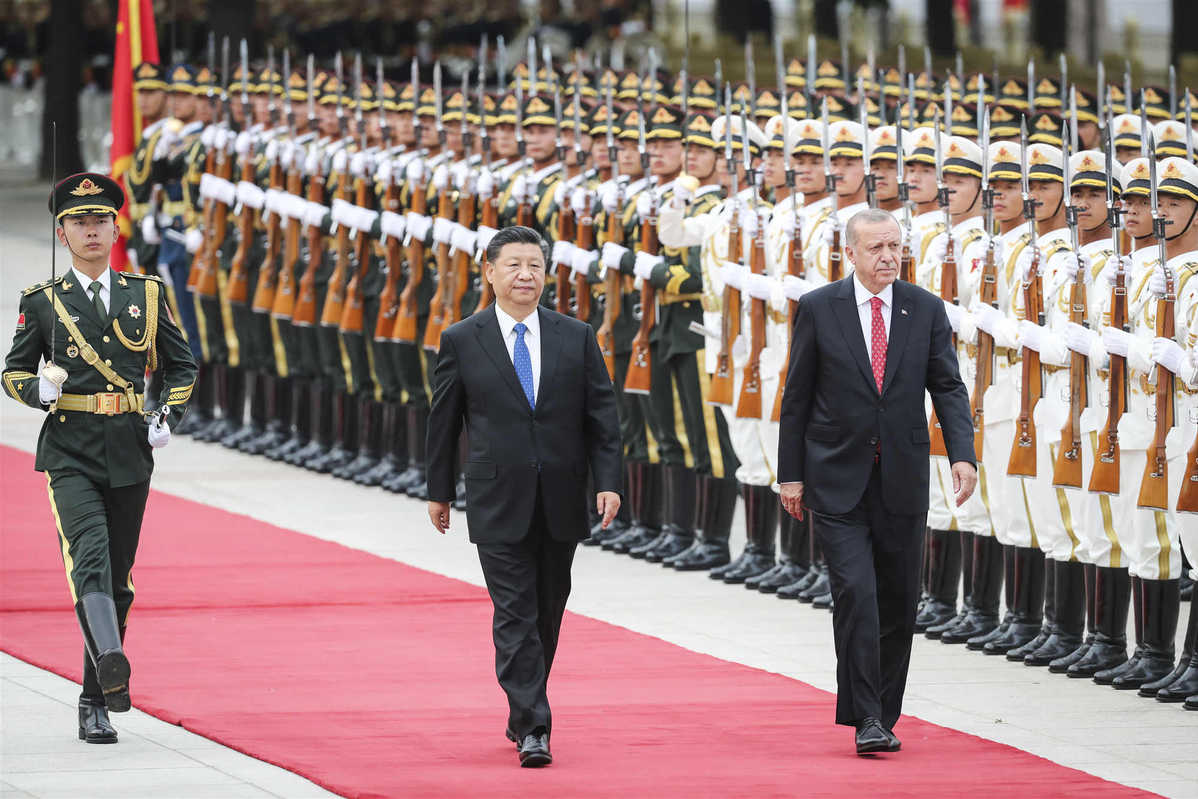 President Xi Jinping holds a welcoming ceremony for Turkish President Recep Tayyip Erdogan outside the Great Hall of the People in Beijing on Tuesday. [Photo by Kuang Linhua/China Daily]

China and Turkey should enhance mutual strategic trust and respect each other's core interests and major concerns on such issues as sovereignty, independence and territorial integrity, President Xi Jinping said on Tuesday.

Xi made the remark while meeting with Turkish President Recep Tayyip Erdogan at the Great Hall of the People in Beijing. Previously, Xi hosted a welcoming ceremony for Erdogan.

Erdogan said that Turkey firmly supports the one-China policy, and that it is a fact that the people of all ethnicities in Xinjiang are leading a happy life amid China's development and prosperity. Turkey will not allow anybody to sow dissension among the two countries, he said.

Noting that both China and Turkey are important emerging markets and developing countries, Xi said it is of great significance for them to enhance strategic cooperation.

The two countries also should strengthen strategic coordination, consolidate the political foundation of the China-Turkey strategic cooperation and cooperative relationship, and ensure that the bilateral relations always operate on a healthy and stable track, Xi said.

China appreciates that Erdogan has reaffirmed his commitment many times to not allow any forces to carry out anti-Chinese or separatist activities in Turkey, Xi said.

China attaches great importance to Turkey's stance of supporting China's fight against terrorism, Xi said, adding that China would like to enhance their anti-terrorism cooperation.

Xi said the two sides should enhance connection of development strategies and deepen practical cooperation. Hailing Turkey as an important partner for jointly building the Belt and Road, Xi said that China would like to speed up connecting the Belt and Road with Turkey's Middle Corridor plan, and promote the cooperation in areas including trade, investment, science, energy, infrastructure and major projects.

The two countries should also enhance cooperation on small and medium-sized projects to bring real benefits for more enterprises and people of both nations, Xi said.

Erdogan said that the Turkey-China friendship, which dates back to the ancient Silk Road, is now further consolidated. Turkey firmly opposes extremism, and it would like to enhance mutual political trust with China and strengthen security cooperation, he said.

Turkey firmly supports the building of the Belt and Road, and it would like to enhance cooperation with China in such areas as trade, investment and infrastructure, he said.