The sage in our age 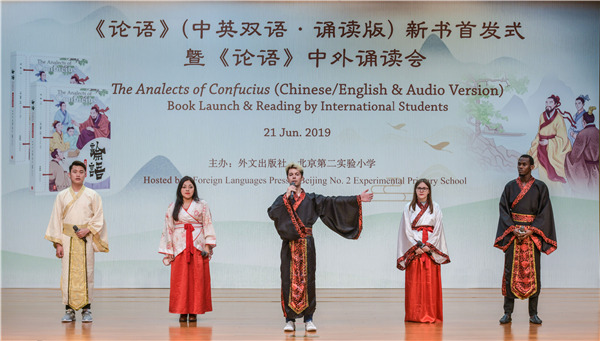 International students from Beijing Language and Culture University perform the recital of The Analects of Confucius. [Photo provided to China Daily]

A new bilingual audio version of The Analects of Confucius applies a modern tone to the words of the great philosopher.

Confucius said: "When three men walk together, there will be one I can learn from. I adopt his good points and note his shortcomings in order to correct my own."

When the international students of Beijing Language and Culture University - who hail from such countries as France, Mexico, Croatia and the Republic of Congo - performed a mini stage play based on this proverb, their audience of younger students from Beijing No 2 Experimental Primary School burst into loud recitations of these lines. They all know the words are those of the philosopher and educator who, in a large sense, shaped thousands of years of Chinese thought and culture.

The students had gathered for the launch of a bilingual audio version of The Analects of Confuciuspublished by Foreign Languages Press in late June.

The Analects is a record of the words and deeds of Confucius and his disciples. It's considered "indispensable reading for understanding Chinese culture".

The collection contains Confucius' guidelines to becoming a benevolent person, such as noting "the gentleman aligns with those of principle and disdains to run with the herd, whereas the opposite is true of the petty man", and how, "he who does not show concern for what is far from him will soon find worries close at hand".

It also includes his wisdom in the running of government. One example is when a disciple, Zi Gong, asked about the practice of benevolence, the master said: "A craftsman, in order to do his work well, must first sharpen his tools. Likewise, in government service, one must serve officials who are virtuous and befriend scholars who are benevolent."

This new version of the classical text is among the first to present a bilingual translation combined with an audio recitation, which its editors say are done by professionals from different fields.

The original text is in ancient Chinese accompanied by its pinyin transcription, a translation into modern Chinese and the corresponding English, which, as the book jacket states, "follows strict collation and checking, so that it is not only a work of great diligence but its language is fluent and up-to-date".

The audio comprises recordings in Chinese by a broadcaster from Radio Beijing and in English by an educational professional from the United States. It can be accessed by scanning a QR code on the book's cover. The newly published The Analects of Confucius. [Photo provided to China Daily]

"It's a bit of a crossover product, catering both to the needs of younger readers in China, as well as foreign readers with a strong interest in learning the basics of Chinese culture and beliefs. It is also detailed and handy enough for Chinese-language learners," says Cao Yun, the book's editor from Foreign Languages Press.

"It's like three or four books combined into one."

Cao says good translation is key. She believes British translator Paul White, with his 30 years of experience working in China and dealing with classical Chinese texts, has done a great job.

One of White's major aims is to present a new translation of The Analects that is both accurate and expressed in modern English to promote Chinese culture across national and cultural boundaries.

"The previous translations of The Analects into English by scholars such as Legge and Waley were accurate enough but were done a century ago. Besides, they were aimed at other scholars, not at the general public. So the language is old-fashioned, pedantic and unappealing to modern readers," White says.

"The other reason (for doing the book) was my realization that there is a wealth of wisdom in the Chinese classics as of yet undiscovered by foreign readers."

He was pleased to note that his longtime friend, Hu Min, CEO of New Channel International Education Group, who planned the publication of the book, says it will be the first of a series of Chinese classics, including Sun Tzu's The Art of War, to be produced along similar lines. For White, the biggest challenge in the translation is reproducing the rhythm of the original text.

"Chinese characters can be arranged neatly, each expressing a single idea and each taking roughly the same time to pronounce," he explains. "English words, however, differ in length, and sometimes several English words are needed to translate one Chinese character."

He believes Confucius' recommendations for personal conduct, such as, "do not do unto others what you would not have them do to you", are applicable to solving today's problems.

However, he also sees Confucius' emphasis on the importance of hierarchy as not being that in tune with the modern world. 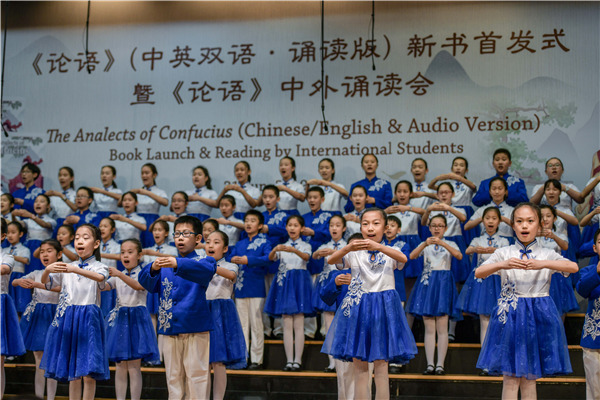 Students from Beijing No 2 Experimental Primary School sing and recite the classical verses passed down from more than 2,000 years ago. [Photo provided to China Daily]

Veteran Chinese translator Xu Yuanchong published his rendering of The Analectsin English in 2011. It was released by China Intercontinental Press under the title, Thus Spoke the Master.

In the book's preface, Xu recounts an anecdote about 75 Nobel Prize winners, who gathered at Paris in 1988 and made a statement to the effect that humankind should seek wisdom from Confucius to live peaceful and happy lives in the 21st century.

"If all the world preached and practiced against violence and disorder, then even the conflicting sides in the world could be reconciled. That is the reason, I think, the Nobel Prize winners would seek wisdom from Confucius to put the world in good order," Xu says.

This may partly explain why The Analectscontinues to attract increasing numbers of readers and fans worldwide. The publisher says its samples drew a lot of attention at the Book Expo America, which took place in the United States in late May.

In China, more schools are listing it among their must-read books and present it in the form of various activities as part of their curriculums.

It is hoped that this new bilingual audio version will help students to value the roots of Chinese culture and enable them to think and communicate with international insight, says Huang Lihua, a senior teacher with Beijing No 2 Experimental Primary School.

The book's editors summarize the core of Confucius' thought as ren, or benevolence, which is one of the most important sources of traditional Chinese culture.

In the 18th century, English poet Alexander Pope realized that and wrote in The Temple of Fame: "Superior and alone, Confucius stood, Who taught that useful science, to be good."