Lantern that lit the way for Long March 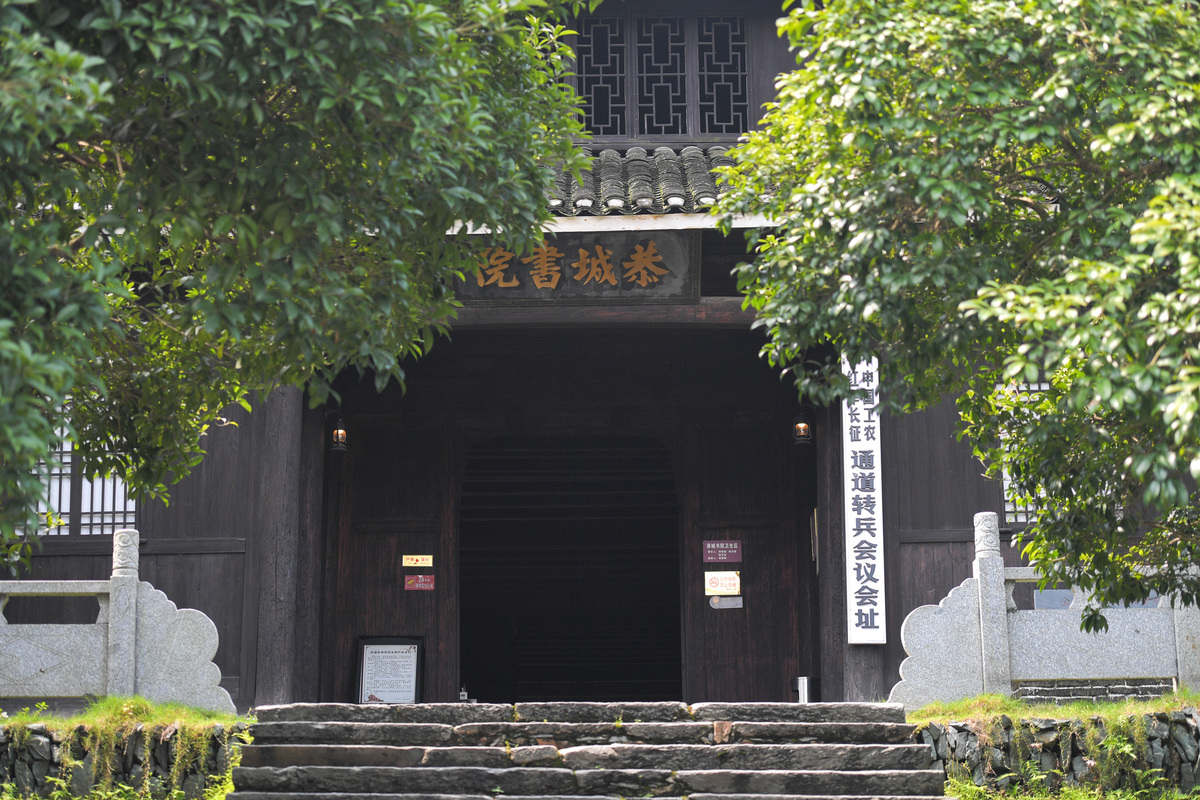 Gongcheng Academy in Tongdao county, Hunan province, has become a tourist attraction because of the 1934 meeting, which changed the course of the Long March. [Photo/XINHUA]

Riding on a red motorcycle from the county seat, 73-year-old veteran Yang Zhengyi, who just had a brush cut there, looked fresh and cool in gray.

The senior was in a good mood as his son and daughter-in-law, who work in town, were planning to bring his 6-month-old grandson to visit, and would also spend the weekend with him. Yang's home is an excellent summer resort as the dog days draw near.

With streams running in the front and back, Yang's old three-story wooden house in the Yutou village of the Dong ethnic group gets cool in the summers and warm in the winters. The village, located in Tongdao county of Central China's Hunan province, has a history of more than 600 years.

Yang has one thing that he has treasured for decades. It is an iron lantern with a glass shade handed down to him from his father Yang Zaineng. The lantern is now being showcased at Gongcheng Academy in the county seat.

Gongcheng Academy is the place where the leaders of the Communist Party of China held an urgent meeting 85 years ago. The meeting changed the course of an odyssey unequaled in Chinese modern history - the Long March.

From October 1934 to October 1936, the Chinese Workers' and Peasants' Red Army officers and soldiers, led by the CPC, left their bases in East China and marched through raging rivers, snowy mountains and arid grasslands to break the siege of Chiang Kai-shek's Kuomintang party-led forces. Some of them marched as far as 12,500 kilometers.

The military maneuver was a turning point in China's revolution, and the meeting was a pivotal event of the Long March since the Red Army abandoned its old route northward and decided to move westward from Hunan to Guizhou province in Southwest China.

In the 1930s, KMT troops came from time to time and press-ganged men in the village, Yang Zhengyi said. Bandits also came and harassed the villagers, who had to take their food and clothing and hide in fear in the nearby mountains.

Having heard that an unknown army was coming, the whole village except Yang Zaineng went into hiding. Yang Zaineng, then a strong man in his late 20s, stayed behind to protect his home village before the Red Army officers and soldiers arrived.

Yang Zaineng soon found that the Red Army soldiers acted differently - they left silver coins for the food and firewood they had taken from the village.

"My mom was a teenager at that time, and she saw that the Red Army soldiers had kept the roots of the vegetables they had cut to grow them again," said Yang Zhengyan, a 59-year-old woman in Yutou village. "When the KMT troops passed by, they uprooted the plants."

One night, a Red Army officer asked Yang Zaineng to lead the way to Guizhou for them. He agreed and walked ahead of them, making gestures since the soldiers could not understand the local dialect he spoke.

They walked several dozen kilometers along winding mountain paths. Yang Zaineng was about to return home when the officer stopped him and gave him a lantern, telling him to take it and light his way home.

It was a precious gift to the guide who had kept the lantern and passed it on to Yang Zhengyi - his youngest son - on his death, telling him to join the military when he grew up and to be like the Red Army soldiers.

Yang Zhengyi fulfilled his father's last wish and became an artilleryman of the People's Liberation Army at the age of 17. He returned to Yutou village and taught at a local elementary school after his retirement in the late 1960s. Yang Biao, Yang Zhengyi's younger son, followed in his footsteps and also joined the PLA.

Yutou village has become a popular tourist attraction. With its pleasant natural landscape, unique ethnic Dong architecture and handicrafts, along with touching stories of the Long March, the village has fascinated visitors from all over the country.

"When my grandson grows up, I'll tell him the story of the lantern," Yang Zhengyi said.