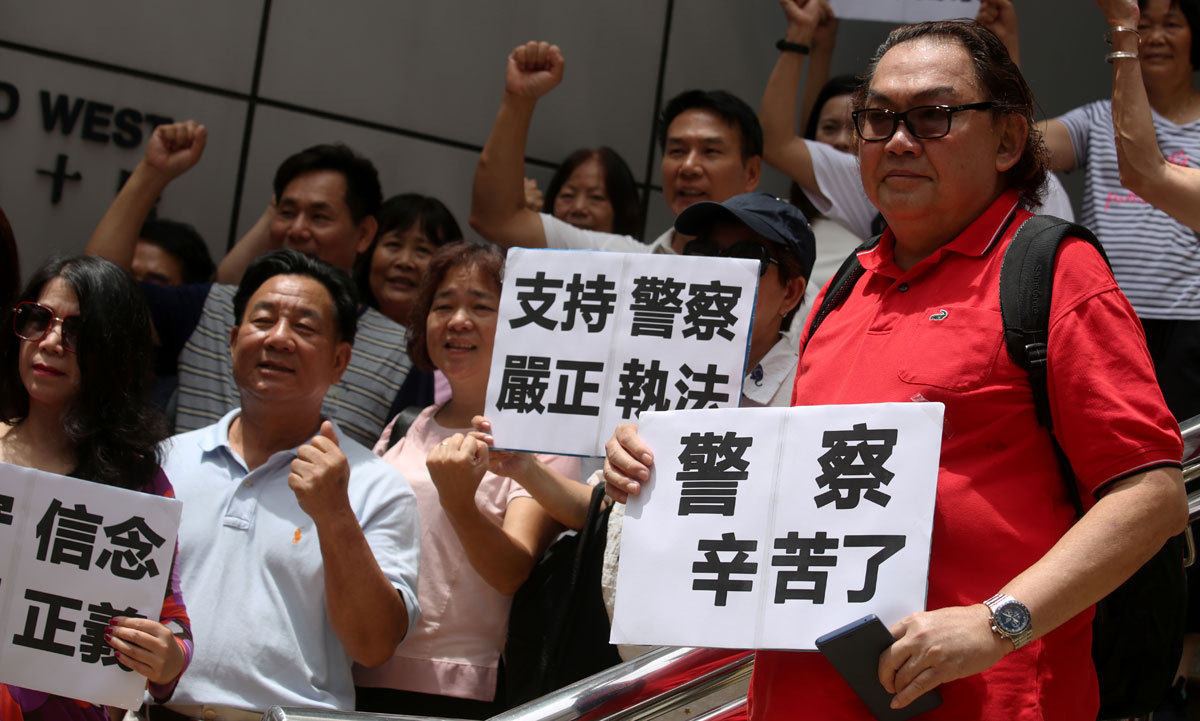 Citizens gather outside a police station in Hong Kong on Monday to show their support for the Hong Kong police in fulfilling their law enforcement duties. CHINA DAILY

People from all walks of life in Hong Kong should oppose and resist violence, stand firm in defense of the rule of law and concentrate on developing the city's economy and improving livelihoods, Yang Guang, a spokesman for the Hong Kong and Macao Affairs Office of the State Council, said on Monday.

The recent violent attacks have had a severe impact on the rule of law, public order, economy and global image of Hong Kong, Yang said at a news conference on the central government's view of the recent situation in the Hong Kong Special Administrative Region.

"We hope that Hong Kong will move past the political contentiousness as soon as possible and instead concentrate on developing its economy and improving people's livelihoods," he said.

Xu Luying, a spokeswoman for the office, said maintaining a sound business environment in Hong Kong is crucial. Recent violence has had a serious impact on the city's social order and international reputation.

Xu added that most members from the Hong Kong Retail Management Association have seen significant declines in sales in the past month. City University of Hong Kong said consumer confidence in the city is now at its lowest level in half a decade.

The number of Southeast Asian tour groups visiting Hong Kong has been falling and Hong Kong's tourism industry predicts that number could fall by as much as 70 percent, she said, without providing a time frame.

"As a small, globally linked economy like Hong Kong in the complex and volatile international economic environment, if the business environment and business confidence decline, it will naturally increase the external risks faced by its financial sector," Xu said.

"Therefore, the top priority for Hong Kong now is to punish the violent acts, restore social order as soon as possible and maintain a sound business environment," she added.

Yang said that the central government firmly supports Chief Executive of the Hong Kong SAR Carrie Lam Cheng Yuet-ngor in leading the HKSAR government's administration under the rule of law.

The central government also supports the Hong Kong police in strict law enforcement, and stands by HKSAR government agencies and judiciary bodies in handing out punishment to violent criminals according to law, he said.

Yang also said that the principle of "one country, two systems" is the best institutional arrangement for maintaining long-term prosperity and stability in the SAR.

The Democratic Alliance for the Betterment and Progress of Hong Kong — the largest political party in the Legislative Council — welcomed the Hong Kong and Macao Affairs Office's remarks.

Holding this news conference showed the importance the affairs office attaches to the HKSAR, as well as support for the SAR government and the police force, said the party's Chairwoman Starry Lee Wai-king.

The central government's expectations are in line with those of most Hong Kong people, Lee said.

The HKSAR government on Monday strongly denounced escalated and repeated violence by protesters and vowed to give full support to police to strictly enforce the law.